(Minghui.org) Today's news from China includes persecution that took place in 11 cities or counties in 7 provinces. According to this report, 7 practitioners were subjected to mistreatment during detention, and at least 14 practitioners were illegally arrested . 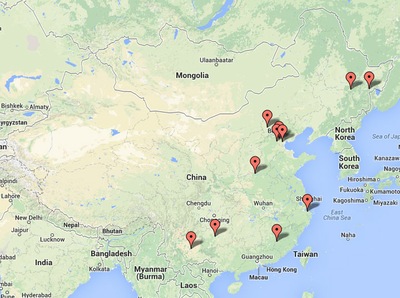 Ms. Li Rong was arrested at home on April 14, 2014. The police took her computer, DVD burner and Falun Gong materials. Ms. Li was taken to the Jiaozuo City Detention Center. She was released the next day due to her physical condition.

Ms. Sui Guilan, a teacher at Taiyangsheng Elementary School in Lishu District, was arrested by two Lishujie Police Station officers when she distributed Shen Yun Performing Arts DVDs at noon on April 18, 2014. The police ransacked her home and took her laptop, two phones and Falun Gong books. She is being held at the Jixi No. 2 Detention Center.

Ms. Ma Yan, Ms. Ma Ling and Mr. Zhang Ji were arrested by officers from the Wuhua Domestic Security Division on the afternoon of April 21, 2014. The three practitioners are being held at the No. 1 Detention Center.

Ms. Yang Kuiqiu and her daughter Ms. Ning Bohua were arrested by Yang Kexin and other officers from the Changshou Township Police Station and the Shangzhi Domestic Security Division on April 21, 2014. Ms. Ning managed to walk away, and her whereabouts are unknown. Ms. Yang has been taken to Harbin.

Ms. Wei Yunrong, 77, from Luokeng Village, Xinqiao Town, Changting, was arrested by Zeng Zhaojin and other officers from the Xinqiao Police Station when she distributed Falun Gong flyers at noon on April 17, 2014. Her home was ransacked. The police took away DVDs, informational materials about Falun Gong, and about 800 yuan. She was released on bail that evening.

Ms. Wang Chunyan was arrested on April 18, 2014. She is being held in the Ningbo Detention Center.

Officers from the Dagang Domestic Security Division in Binhaixin District went to Zhaizhuangzi Village, Taiping Town. They arrested Mr. Zhao Wanjiang and his wife on the morning of April 21, 2014. They took away a printer, DVD burner, two computers, Falun Gong books and other belongings. The couple was taken to the Dagang Detention Center.

Mr. Ye Jia and his wife were arrested on the afternoon of April 21, 2014. Their home was ransacked and their whereabouts are unknown.

Mr. Zheng Huiwang had been on a hunger strike to protest the persecution in the Baoding No. 1 Prison for four or five days as of April 20, 2014. He was taken to the hospital for force-feeding.

Mr. Zheng was arrested at home six years ago. He was sentenced to ten years of imprisonment two months later. He has been held at the Baoding No. 1 Prison.

Wei Chaohui and other officers from the Xinji Domestic Security Division broke into Mr. Chen Jianjun's home at Hongqiying Village, Hemujing Town, on March 28, 2014. They took away Falun Gong books, computer, printer, DVD burner and about 1600 yuan. Mr. Chen was handcuffed and arrested. The detention center refused to accept him because his blood pressure was up to 200. He was released after the police extorted 3000 yuan.

Ms. Qiao Guiying and Ms. Fan Xiuye were arrested by officers from the Wuyilu Police Station when they spoke to people about Falun Gong on the afternoon of April 19, 2014. The two practitioners were taken to the Shisanli Detention Center early the next morning.