(Minghui.org) Falun Gong practitioners held a truth-clarification event on the busy streets near George Street and Chinatown on May 3, 2014. They held banners and lined up on the sidewalk to form a human “Great Wall of Truth” to raise awareness of the persecution, in particular the forced organ harvesting of living Falun Gong practitioners.

Many Chinese quit the Chinese Communist Party (CCP) and its affiliated organizations at the event. 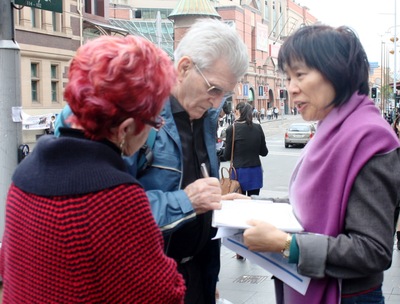 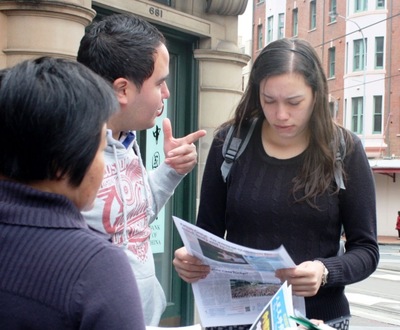 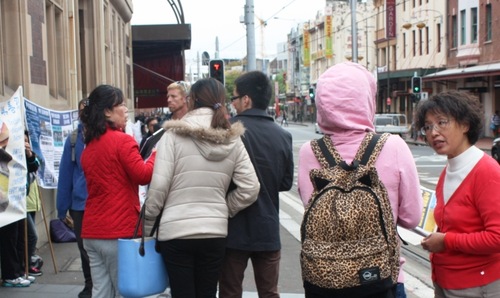 Lauren Torres and her boyfriend were visiting Sydney from Mexico. They told practitioners that they had heard of the organ harvesting from news programs in Mexico. They said with tears: “We were shocked and angry!” They expressed their hope that governments can work together to end this heinous crime. They signed a petition for the same cause and took some flyers to give to their friends.

A woman from Zhejiang Province in China asked a practitioner: “Why do you practice Falun Gong? What's the benefit?” The practitioner told her his personal story, and the mind and body benefit of the practice. She quit the CCP and took information to continue to learn about Falun Gong.

A young Chinese student couple didn't want to listen to the facts initially. However, after practitioners cleared up their misconceptions about Falun Gong, they understood the benefit of quitting the CCP and why clarifying the truth was not getting involved in politics. They quit the CCP and also planned to persuade their CCP official parents to do the same.

A young man told practitioners that he had already quit the CCP on the lawn in the National Mall in Washington DC.

“Shandong No. 1 Prison Tries to Cover Up Their Crime by Not Allowing Family to Visit”