(Minghui.org) Chinese tourists visiting the Shilin Official Residence in Taipei, Taiwan are warmly greeted each day by Falun Gong practitioners and their informational display boards. Many visitors take the opportunity to ask questions and share their concerns and appreciation for the practitioners who volunteer at the site.

The Shilin Official Residence, a popular well-known tourist destination frequented by Chinese tourists, is the former residence of the late Republic of China President Chiang Kai-shek. Located on Zhongshan North Road in Shilin District, Taipei, it first opened to the public in 1996.

Display boards near the front entrance of the Shilin Official Residence draw the attention of tourists and provide an opportunity for them to learn the facts regarding Falun Gong and the persecution.

One man paused by the posters on a rainy day in early April. Practitioner Huamei greeted him by saying, “Hello. The information on these boards cannot be seen in China due to the Chinese Communist Party's (CCP) cover-up of the facts. Since you have the opportunity to travel outside of China, please take this chance to learn the facts about Falun Gong and the persecution.”

The man expressed concern for Huamei, “Aren't you tired from standing here on such rainy days?”

Huamei thanked him for his concern and replied, “We know what we do is meaningful and good for you. Thus, we don't feel tired. We come here voluntarily to offer you this information because the right to know and access to the facts are so precious for fellow Chinese in China.”

“We are all volunteers,” answered Huamei, “The Falun Gong practitioners you see here are from different walks of life, including managers, business owners, teachers, professors, doctors, lawyers, and housewives. We volunteer here regardless of the weather, instead of enjoying our normal comfortable lives, because we don't want you to be implicated when the CCP meets its retribution for committing so many crimes. We present you the facts so that you can make good choices for yourselves.”

The man then carefully read the display boards and listened to Huamei clarifying the facts. He expressed his appreciation to her and other practitioners before leaving. 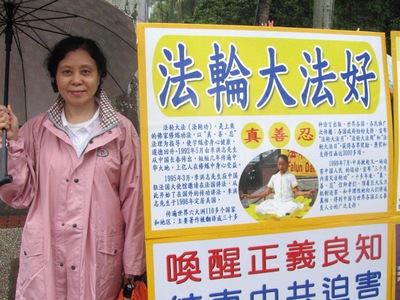 Huamei (pictured) and her husband go to the Shilin Official Residence to clarify the facts about Falun Gong three days per week. They were both forced into early retirement due to ailments, but after beginning Falun Gong cultivation practice in July 2000, they become perfectly healthy within a few months. Having benefited from the practice, they volunteer at tourist sites to help inform Chinese tourists of the facts.

We Are Not “Involved in Politics”

Chinese tourists are often shocked upon learning about the brutality of the Falun Gong persecution. Informing them that the main perpetrators have been sued in international courts has had a deep impact.

Ms. Lin is at the Shilin Official Residence site every Thursday. Some common questions she gets from Chinese tourists include, “Are these true?” “So many high level officials have been sued? Really?” “Live organ harvesting! Can it be true?”

Ms. Lin replies, “Yes. It's true! Falsifying information is a crime in Taiwan. Look at these photos of the officials. They are defendants in Falun Gong practitioners' lawsuits in many countries. CCP live organ harvesting has been reported by international media and condemned by the European Union Parliament and the United States Congress. Since you have an opportunity to learn these facts because you are outside of China, we hope you won't be misled by the CCP.”

A few months ago, three young Chinese men from China, the United States, and a South American country came to the Shilin Official Residence together. Their first question was, “Why are you involved with politics here?”

After some of the lies of the CCP had been explained, the young men had time to think on their own. Their next question was, “Why does the Chinese Communist Party persecute you (Falun Gong) only, and not others?”

“Falun Gong is not the only group it persecutes,” replied Ms. Lin, “Take a look at recent history, and how many people died in the Cultural Revolution? How many people did the Party kill during the Tiananmen Massacre in June 1989? What crimes did the students commit? They just went to Tiananmen Square to express their opinions and requests.” The three young men looked at each other and were silent.

Ms. Lin continued, “The Party not only persecutes Falun Gong, it has killed countless innocent people since it took power in China. It frames anyone to justify its persecution of whomever it wants to suppress. We are all familiar with the Party's tactics, aren't we?”

The three men nodded. They all quit the CCP organizations. One of them said, “Phew... this trip was worthwhile!”

“Exposing the CCP's Myth of “Rule of Law””