(Minghui.org) The Saipan Falun Dafa Association participated in the 33rd Flame Tree Arts Festival from April 25 to April 27, 2014, as they have done in previous years. Many tourists from China took this opportunity to learn the facts about Falun Gong. More than 20 Chinese tourists quit the CCP and its affiliated organizations.

Dozens of pictures from the Truth Compassion Forbearance International Art Exhibition were displayed by Falun Gong practitioners at the festival. Visitors to the exhibition had high praise for the superb skill of the artists, condemned the Chinese Communist Party's (CCP) persecution, and expressed their support to help end the persecution in China.

Three tourists from other countries sincerely praised the artwork and showed great interest in learning Falun Dafa. Practitioners told them about Dafa's benefits and how the practice has been embraced around the world. The visitors took introductory materials and indicated that they would find out more about Falun Dafa on the Internet. 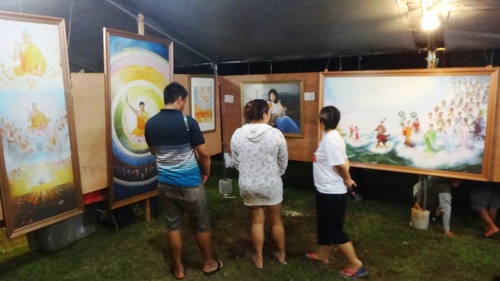 Many tourists from China took this opportunity to learn the facts about Falun Gong. More than 20 Chinese tourists quit the CCP and its affiliated organizations. One Chinese tourist studied the painting “Melt into the Fa” for a long time. He kept saying how much he liked it. A practitioner gave him details about the persecution and the staged Tiananmen Square self-immolation. After learning the significance of quitting the CCP, the man quit the Party using an alias.

After studying the painting “Brightness in the Night,” a Chinese tourist asked, “Does quitting the CCP keep me safe? I would like to quit.” Another Chinese visitor carefully studied and took pictures of every painting. He had heard about the persecution of Falun Gong when he was in China and he took this opportunity to quit the Communist organizations he had joined. He also asked practitioners to forward his greetings to Master Li Hongzhi, the founder of Falun Gong.

A young Chinese couple was amazed by the oil painting “Shock,” which had won gold medal in NTDTV’s 2009 Chinese International Figure Painting Competition. It was based on a true story about an elderly lady who was tortured in China because she wouldn’t give up her spiritual belief. Even though she was shackled, she still did the meditation. All of a sudden the shackles fell away, and she floated up in the prison cell. Shocked and scared, her torturers kowtowed to her and begged her to forgive them. The next day they released her, and she returned home.

The young couple told practitioners that they sympathized with and admired practitioners in China who were subjected to the CCP's inhuman persecution. They chose to quit the CCP using nicknames.

Local Chinese Americans (Saipan is a U.S. territory) admire practitioners' persistence over the past 15 years in helping people to understand the truth about Falun Gong. Many expressed the hope that they will keep up their great efforts.