(Minghui.org) Today's news from mainland China includes incidents of persecution that took place in 12 cities or counties in 9 provinces. According to this report, 5 practitioners were subjected to mistreatment during their detention, and at least 16 practitioners were illegally arrested. 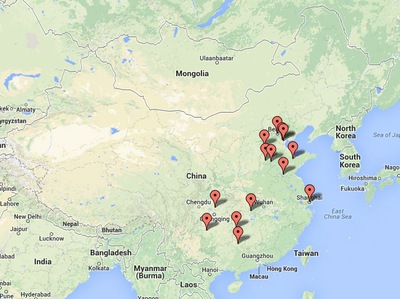 Officers from the Changle County 610 Office and the Domestic Security Division drove to Mr. Zheng Fuxiang's home to harass him on March 31 and April 2, 2014, but to no avail because no one was at home. The police then broke into the store owned by Mr. Zheng's daughter in an effort to locate him, but were also unsuccessful.

Mr. Zheng was detained five times, had been sentenced to forced labor three times, and taken to a brainwashing center twice. He was subjected to several torture methods, including electric shocks, sitting on an iron chair, squatting for a long time, solitary confinement in a small cell, sleep deprivation and force-feeding for refusing to give up his faith. The 610 Office ordered Mr. Zheng's pension to be withheld beginning in 2008.

Mr. Zheng was repeatedly harassed and arrested several times over the past years and his family was under tremendous pressure. He had to leave home and work outside of his hometown for years to avoid further persecution.

Ms. Gao Xiumei, 80, and Ms. Yang Qing, 62, were arrested by officers from Fangzhai Town at noon on May 12, 2014, for distributing Shen Yun Performing Arts DVDs and truth-clarifying flyers about the persecution of Falun Gong. Five or six officers confiscated all Falun Gong books at Ms. Yang's home. Ms. Gao was released the next morning.

Ms. Yuan Jinfeng was arrested on May 13, 2014 and her cell phone was confiscated.

Ms. Dong Xiaoling, Ms. Wei, and an elderly female practitioner were arrested at Ms. Dong's home on the afternoon of May 11, 2014. They were taken to the Lingui County Police Department.

Ms. Bai was also arrested by Lingui County police officers at 5 p.m. that day. They ransacked her store and home.

Ms. Wei, Ms. Bai and the elderly female practitioner were released, and the whereabouts of Ms. Dong and Ms. Su are unknown.

Ms. Ren Weihua, 42, and Ms. Liu Ying were arrested by officers from Zouwu Town on May 13, 2014, for distributing Shen Yun Performing Arts DVDs. They are being held at the Zouwu Town Police Station.

Ms. Yang Siai, Ms. Yang Li, and Ms. Pang Mei were arrested by officers from the Huaqiao Police Station on May 12, 2014, while hanging banners with messages about the persecution of Falun Gong. They are now being held at the Huaihua City Detention Center.

Mr. Liu Longping was arrested by Xie Feng, director of the county 610 Office, and Xiang Xiaoyang, deputy captain of the county Domestic Security Division, on May 13, 2014. He was taken to the Banqiao Village Brainwashing Center in Wuhan City.

Mr. Ruan Youlin was arrested during August 2014, for talking to people about the persecution of Falun Gong. He was sentenced to a three-year prison term by the Qixingguan District Court.

Ms. Liu Aiqing was recently sentenced to a five and a half year prison term. She was taken to the Tianjin Women's Prison.

Ms. Wu, an elderly practitioner, was arrested at home by officers at noon on May 9, 2014. The police confiscated her Falun Gong books and truth-clarifying materials. She is being held at the Shijingshan Police Department in Beijing. Her family was told to bring her items for daily use but they were not allowed to see her.

Ms. Yao Shilan, in her 60s, was arrested by officers from the Houxiang Police Station and Wuqing Domestic Security Division on May 13, 2014. The police ransacked her home that evening.

Ms. Zhao Jinfang has been missing for six or seven days.

Ms. Licheng Xiu, 74, was arrested by officers from the Shimahe Police Station on the morning of May 12, 2014, for distributing Shen Yun Performing Arts DVDs. The police informed her daughter of the arrest and told her to visit her mother that afternoon.

A dozen officers including Liang Shibing from the Domestic Security Division along with officers from the local residential committee broke into her daughter's home the next day. They confiscated Ms. Liang's Falun Gong books, and all deposits, credentials and personal items of her daughter.