(Minghui.org) Today's news from China includes incidents of persecution that took place in 14 cities or counties in 7 provinces. According to this report, 15 Falun Gong practitioners were subjected to mistreatment during their detention, and at least 11 practitioners were illegally arrested. 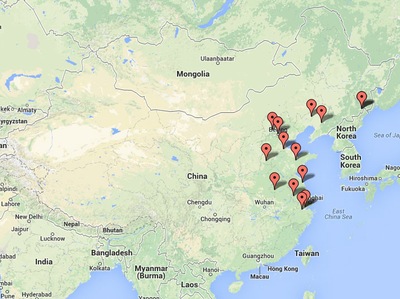 1. [Beijing] Elderly Ms. He and Another Practitioner Arrested

Ms. He, in her 80s, from Bali Village in the Haidian District was arrested by officers from the Ganjiakou Police Station on April 26, 2014. Five or six plainclothes officers ransacked her home and confiscated a portrait of the founder of Falun Gong, more than ten copies of Zhuan Falun, other Falun Dafa books, a computer, a printer, and several thousand yuan in cash (paper bills with truth-clarification messages written on them). The police released her the following day but did not give her back her belongings.

Mr. Yue, a practitioner from Northeast China, was also arrested at the scene. He is still in police custody.

Ms. Li Guimei was arrested by officers from Xinxing Police Station for clarifying the truth about Falun Gong on January 9, 2014. She was released after 15 days of detention. The 610 Office and Domestic Security Division officers extorted about 5,000 yuan from her sister as a “guarantee deposit.”

Ms. Li Aiping was taken to the Fuyang City Brainwashing Center on May 4, 2014.

Mr. Ma Zhenyu was arrested in the Nanjing Train Station on May 3, 2014. His whereabouts are unknown.

Ms. Li Shuangshuang, Ms. Xing Xiuhua, and Ms. Han Min from Yanshan County and Ms. Sun Lanfeng from Haixing County were arrested for clarifying the truth about Falun Gong in Zhaomaotao Town, Haixing County, on May 4, 2014. They are being held in the Haixing County Detention Center.

Ms. Zhang Yunling from Yuezhong Village, Xingqiao Town, was transferred to the Sheyang Brainwashing Center on May 2, 2014. Her mother and younger sister from Jiangxi Province came to Jiangsu Province to visit her, but the detention center guards told them that Ms. Zhang had been transferred elsewhere.

Mr. Ha Jianhua was arrested on April 24, 2014. He is being held in the Weifang City Detention Center.

Ms. Qian Guizhi was arrested in the summer of 2011. She was sentenced to three years in prison. She has been held in the Liaoning Women's Prison.

Ms. Bi Mingqin and Ms. Wang Jinping were arrested on September 25, 2012. They were sentenced to two years in prison and taken to the Liaoning Women's Prison.

Ms. Wang Jinping was seriously ill as a result of the persecution. She was sent to a hospital in Liaoyang City for surgery. Before recovering from the surgery, she was taken back to the Liaoning Women's Prison.

Ms. Cui Donghua was arrested and taken to the police department for distributing Shen Yun Performing Arts DVDs on the afternoon of April 30, 2014. It was reported that she was taken to Yanji City. Her home was ransacked and the police confiscated a portrait of Falun Gong's founder, Falun Dafa books, and Falun Gong informational materials.

Mr. Wang Zhiwu from the Hanshan District repairs bikes for a living. Officers from the Congtai District Police Department and the Lianfang East Police Station went to Mr. Wang's bicycle repair stand and arrested him on the afternoon of May 5, 2014. The officers ransacked his home and confiscated more then 10,000 yuan in cash (paper bills with truth-clarification messages written on them), more than 20 copies of the Nine Commentaries on the Communist Party, and truth clarification DVDs. Mr. Wang is being held in the Lianfang East Police Station.

Ms. Li Xiulin and Ms. Zhou Fenglian were arrested in the Huai'an Train Station by the Railroad Police Station for telling others about the facts of Falun Gong on May 5, 2014. The police took a lot of personal belongings from their homes. Both practitioners were taken to Datong City and detained.