(Minghui.org) Just seven months after her release from the Qianjin Forced Labor Camp, school teacher Ms. Xu Ying from Hailin City, Heilongjiang Province was illegally arrested again on March 17, 2014. She is now held in a brainwashing center in Qiqihar, where detained Falun Gong practitioners are cut off from the outside world and subjected to brainwashing and torture.

Since no visitations are allowed, Ms. Xu's family is extremely worried about her condition.

When Ms. Xu was arrested for the first time in August 2012, she was held in a detention center before being transferred to a local labor camp. After her most recent arrest, however, the local authorities sent her to the Qiqihar Brainwashing Center. After the Qianjin Labor Camp was shut down in late 2013, the Qiqihar Brainwashing Center took on a more prominent role in the persecution of Falun Gong.

The brainwashing center in Qiqihar City is sometimes operated by the local Political and Judiciary Committee and the 610 Office. These state organs aim to force Falun Gong practitioners to give up their beliefs through coercion, physical torture, and psychological manipulation. Their victims are forced to listen to slanderous recordings or watch defamatory videos. They are also forced to write the three statements to denounce Falun Gong and give up their beliefs.

As stipulated by Item 5 of Article 8 in the Law on Legislation of the People's Republic of China and Article 9 of Administrative Punishment Law of the People's Republic of China: “Mandatory measures and penalties involving deprivation of citizens of their political rights or restriction of the freedom of their person shall only be governed by law.”

(For an account of crimes committed by the Chinese Communist Party's brainwashing centers, specifically following the shutdown of the labor camp system, see the following case study: A System Designed to Destroy a Person Mind and Soul – A Case Study – Xinjin Brainwashing Center )

On August 14, 2012, Ms. Xu was arrested by police from the Domestic Security Division. The police also searched and ransacked her home, confiscating two computers, a printer, two mobile phones, and other personal belongings. She was interrogated during detention by police, who also tried to force her to write a guarantee statement.

In October of the same year, Ms. Xu was sentenced to one-and-a-half years of forced labor and transferred to the Qianjin Forced Labor Camp, where she underwent various forms of abuse, including the iron chair torture. She was not released until August 17, 2013. 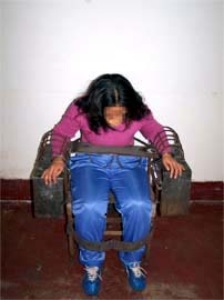 At the Qianjin Forced Labor Camp, a division leader forced Ms. Xu to write the three statements to denounce Falun Gong. When she refused, the leader threatened her with electric batons and denied her any family visits. Ms. Xu also was not allowed access to her funds for daily necessities, which came from her family.

Guards had inmates monitor and abuse the Falun Gong practitioners. They also forced practitioners to recite camp regulations every day. When Ms. Xu refused, she was taken aside and beaten.

Intensified persecution in Division No. 2

In May 2013, Ms. Xu and three other practitioners were transferred to Division No. 2 for intensified persecution. They were not allowed to brush their teeth, drink, or eat. On May 25, the four practitioners went on a hunger strike in protest.

Division leader Zhou Muqi beat Ms. Xu repeatedly. For each beating, she would tighten the handcuffs first, and then grab Ms. Xu's hair and slap her. Her face swelled up and chunks of her hair were yanked out.

Although the Qianjin Forced Labor Camp was seemingly “abolished” in 2013, it merely took on another title as a “drug rehabilitation center” and continued its abuse and outright torture of Falun Gong practitioners.

Ms. Xu Ying and many practitioners are still detained there. Those responsible for the persecution should be held responsible in accordance with the law.

“Canada: Member of Parliament Elizabeth May Writes in Congratulation of Falun Dafa Month”