Vancouver, Canada: Practitioners Raise Awareness of the Persecution in Chinatown

(Minghui.org) Falun Gong practitioners in Vancouver held a series of activities on April 27, 2014, in Chinatown to raise awareness about the persecution of Falun Gong. 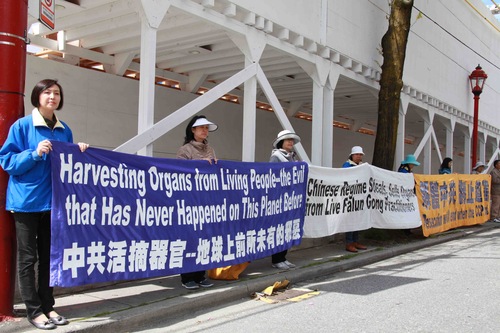 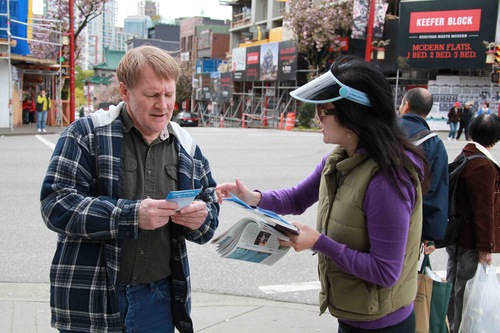 Passing out flyers to passers-by 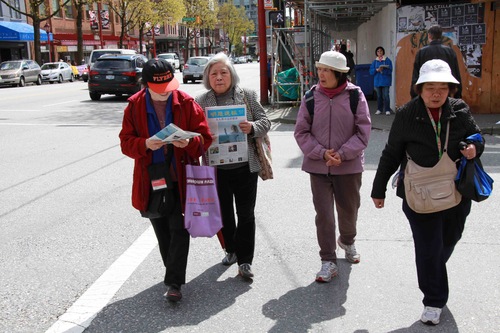 Pedestrians receive newsletters and other material

“The Persecution of Truthfulness-Compassion-Forbearance Must Stop”

Yasin Kiraga is a graduate in Political Science from the University of British Columbia, and runs his own political consulting firm. He stopped by to learn about Falun Gong and the persecution, and volunteered to give a speech to the public. He said that the suppression of the Falun Gong practitioners and Truthfulness-Compassion-Forbearance is unacceptable. 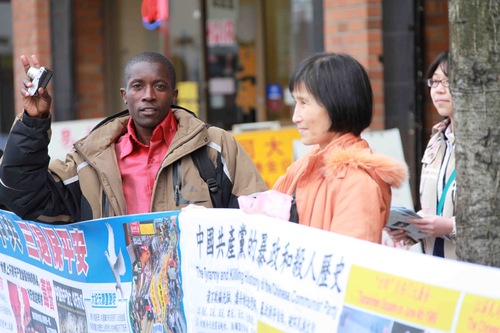 Mr. Yasin Kiraga joins the practitioners in calling for an end to the ongoing persecution.

Kiraga said that the persecution of Falun Gong must stop immediately. He created a speech about the subject, and has helped to raise awareness of the persecution on his company's Facebook page.

Mairo Giraldo, a former Buddhist, expressed his respect for the practitioners by putting his hands in the Heshi gesture.

He said, “I know the practitioners are protesting the suppression in China. Mankind has the right to spiritual belief and it should not be deprived. Your steadfast belief is a shining inspiration to all of us.”

“It’s very important to understand the truth. What you are doing is a very difficult task that is filled with tribulations: imprisonment, torture and harassment. Divine beings recognize what you are doing and support you.” 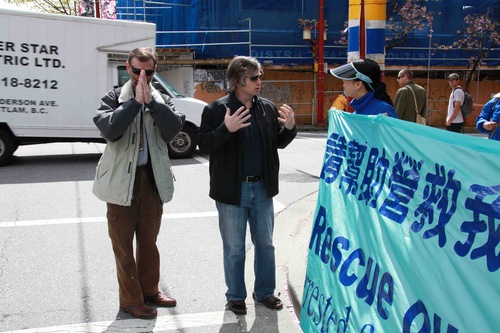 Mr. Giraldo shows his respect for the practitioners

“You Have Already Won by Raising People's Awareness Peacefully”

Randy Noel lives near Chinatown and came over to talk to the practitioners. He said that the practitioners are doing a very good thing, “In China, the dictators are still murdering and torturing people. Exposing that can help put a stop to it.”

“Raising awareness about the persecution in peaceful and legal ways makes the world a better place. [What you have experienced] may be brutal, but you have already won by raising people's awareness peacefully.” 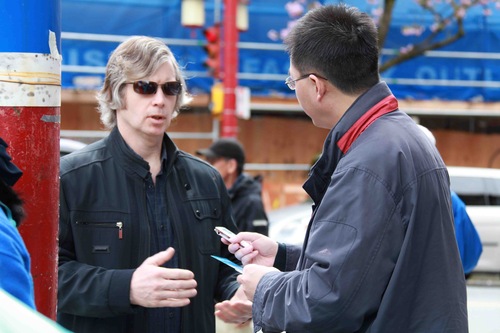 Randy Noel talking with the practitioners

“Chinese Tourist: “Falun Gong Is the Pride of the Chinese People””