(Minghui.org) “How I wanted to paint again, everything I have gone through: the feeding tube, the handcuffs, the iron window, the logo on the uniform! I saw clearly the bruises on my hands, the dried blood on my lips, my bare feet, the filth in my hair....tears run down my cheeks again....”

Above is an excerpt from a young woman's diary written while in custody at a detention center in China. Simply for telling people how to break through the Internet blockade, Ms. He Wenting was arrested for a second time on December 18, 2013 and has been detained since.

Once a rebellious youth who struggled to find her identity, Ms. He went through a total transformation into a talented writer and painter after beginning the practice of Falun Gong. She became much calmer and was able to produce many highly acclaimed pieces.

Having benefited so much from the practice that gave her a new outlook on life, Ms. He never wavered in her faith and did all she could to spread the goodness of Falun Gong. After realizing that so many people were blinded by the state propaganda against Falun Gong, she began to distribute anti-firewall software to help people learn about the persecution.

Following her most recent arrest last December, Ms. He's family went through a lot of trouble finding her whereabouts. They eventually received her diary, which she managed to smuggle out of the detention center.

The diary detailed the torture and humiliation that Ms. He went through, and gave a glimpse of what is happening to Falun Gong practitioners in detention facilities across the country.

Despite her suffering, Ms. He does not have the slightest regret for her practice of Falun Gong. She hopes that more people can awaken to the Chinese Communist Party's brutality through her firsthand accounts of persecution. 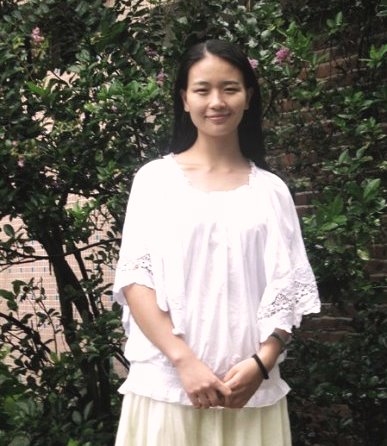 Ms. He was arrested the first time in 2009 at her studio for telling others about Falun Gong. A policeman grabbed her by the hair and slammed her head against the wall, all the while cursing at her. She was detained for 15 days.

Facing this sudden and brutal persecution, the 23-year-old Wenting did not back down. While in detention, she sang Falun Gong songs with a smile daily and told others about Falun Gong. Another detainee asked Ms. He why she was always so happy and peaceful. Wenting's story moved everyone in the cell. In the end, one young woman said, “You speak so well, I also want to be a good person like you. I will no longer do bad things and cause my family to worry.”

Ms. He also realized that the reason that others still misunderstood Falun Gong was due to the Chinese Communist Party's (CCP) slanderous propaganda. Giving out software break through the Internet blockade was one way she could help people learn the facts.

When she was doing that near Guangdong Foreign Language and Trade College, the school security personnel arrested her and took her to the Xiaoguwei Police Station in Panyu District, Guangzhou City, Guangdong Province. She was held for 15 days in Shawan Zhenfuchong Detention Center in Panyu District. 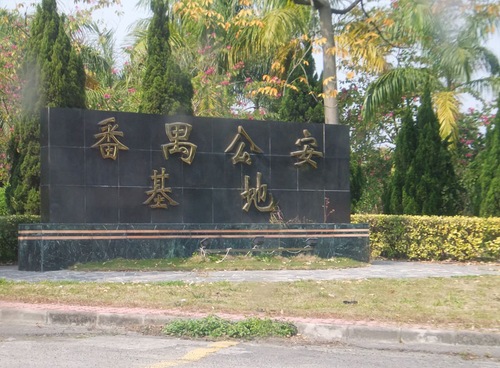 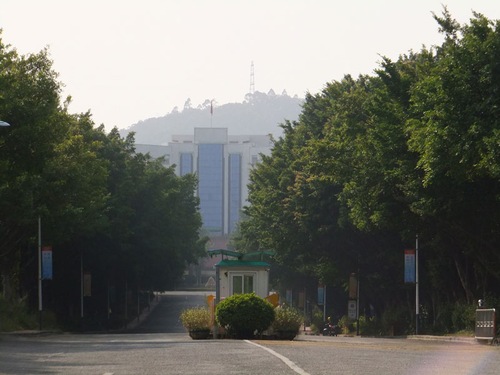 The Shawan Zhenfuchong Detention Center in Panyu District, Guangzhou City, Guangdong Province is inside the Panyu Public Security Base.

Ms. He recorded the gross mistreatment that she suffered at the detention center:

“When I was taken to the detention center, I was pushed into a dark cell, and a group of female inmates came up and stripped me naked! They forced me to wear an inmate uniform. No undergarments were provided except for a panty made of paper. I burst into tears, how humiliating!

“The bedding was very thin, I trembled due to the cold and could not sleep. A male guard was shouting outside: No quilts for the Falun Gong [practitioner] who did not reveal her name!

“I was handcuffed and shackled in the morning for a physical exam. I refused [to be examined] and returned to the detention center. I am not a criminal, I refused to wear an inmate uniform. I took off my clothes and faced the wall, and requested my own clothes, even though every cell in my body was shaking due to the frigid temperature.

“Every morning, I was tied down for force-feeding, five to six male guards and male inmates pinned me down on the bed, and pushed the feeding tube through my nose. I almost passed out because of the excruciating pain, and constantly threw up, I heard my own agonizing screams. In the past, I only read about the force-feeding torture online, now I am experiencing it myself...

“I asked them: 'How can you have the heart to treat a defenseless woman like this? Do you have a family of your own? I only want to defend my lawful rights! Defend my innocence! I don't hate you or resent you, I truly hope you make a righteous choice for yourself!' ”

Ms. He Wenting is a talented artist, preserving beauty with her paint brush and writing poetry with her heart. Many people know her as a gentle, serene and beautiful woman, but she was once a rebellious youth who had lost her way.

He Wenting was born in 1986 in Dao County, Hunan Province, in a poor farmer's family. Her talent for art and writing quickly surfaced. She won numerous awards at the city level, published a number of novels and comics in a national newspaper, and joined the Writer's Association in Yongzhou at age 14. But she lost her way and began deviating from traditional values, eventually leaving her family behind. As she aimlessly pursued one thing after another, her mental and physical health both declined sharply. She was in a state of confusion and agony, gradually descending into despair and hopelessness.

When Ms. He was at her lowest point, she met a Dafa practitioner who was talking to people about Falun Gong on the street. She learned about Falun Gong, and realized that it was true cultivation. From that point on, she began cultivating, abided by Falun Gong's principles of Truthfulness-Compassion-Forbearance and bade farewell to her troubled past. Shortly afterward, all her symptoms of illness disappeared, which reinforced her heart for cultivation.

After Ms. He began her cultivation, she kicked many bad habits. She reconnected and made amends with her family, and started helping her parents take care of her brothers. In addition, she returned to school while working part time to support herself.

He Wenting recounted: “When I was lost and in agony, it was Falun Dafa that saved me from the whirlpool of despair that I was drowning in. I understood the true meaning of life. I am very fortunate. It was Falun Dafa that fulfilled the new me; otherwise, there would be one more lost girl out there. Dafa has taken root in my heart. No matter what I encounter, I will never give up Dafa.” 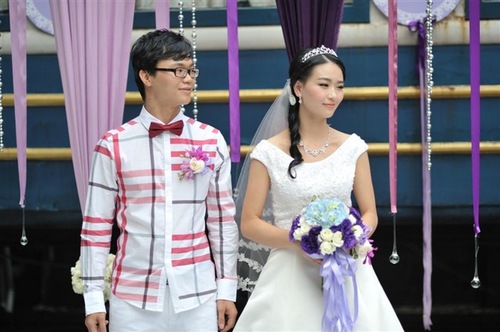 Wenting went to Guangzhou to pursue her art in 2010, and met a young artist who had the same aspirations. They eventually got married. They both abide by the principles of Falun Dafa, and are reviving traditional realistic painting through their work. As Ms. He's spiritual realm has greatly elevated, it is reflected in her art, as well. Through this she further felt the enormous power of Falun Dafa.

A Strong Woman with Steadfast Faith

In her diary, Wenting stated: “A bright light hit the wall in front of me. Counting the days since I have been here, I felt as if I have shed many layers of skin already.... Before I came here, I was in my warm, comfortable bed and had everything everyone envies: a happy marriage, an ideal job, a bright future, and I was expressing myself with my paint brush....everything changed overnight, I began reflect about me, belief, life...

“I am willing to give up fame and fortune for conscience and justice. A window has separated two worlds; a tall wall has blocked people's moral and judgment. But indestructible righteous thoughts will see me through any perilous situation.”