Langfang City, Hebei Province: 142 Sign Petition Calling for an End to the Persecution of Falun Gong

(Minghui.org) In an environment where people once dared not even whisper complaints about the Chinese Communist Party (CCP), more than one hundred people in Langfang City, Hebei Province recently spoke out in writing, and in their real names. The petition, signed by 142 citizens between February and March 2014, demands an end to the persecution of Falun Gong.

Such courageous acts of support for Falun Gong have become a growing trend throughout China, as it seems the public has become aware of the facts and is no longer willing to stand by while innocent people are tortured and killed for their belief.

On the petition form “Stop the Persecution of Falun Gong,” signatories expressed the following: “Jiang Zemin, the then head of the CCP, initiated the persecution of Falun Gong in July 1999. It has directly persecuted tens of millions of innocent Chinese and put more people's lives in terror and despair. Facts of the persecution exposed so far are only the tip of the iceberg, due to CCP's information blockade. We hope that you can sign this petition to express your kind support for a bright future for all of us.” 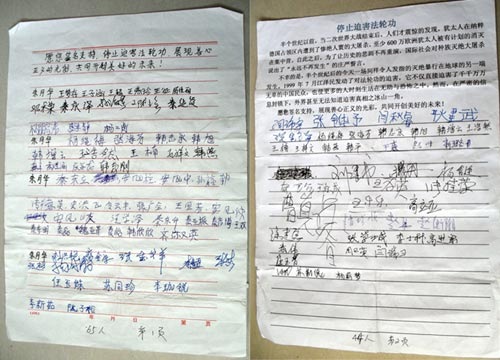 The petition: “Stop the Persecution of Falun Gong”

As they offered their signatures, many expressed their indignation at the ongoing persecution and the crimes of the CCP. “The CCP will eventually have to pay for its crimes” was a common sentiment.

A retired CCP official who signed the petition said, “I have experienced so many CCP struggles. I'm well aware of the ruthlessness of the Party. But I have never seen any groups so peaceful and rational as Falun Gong [practitioners]. Falun Gong practitioners are admirable. I support you.”

One man said, “My wife is a Falun Gong practitioner. Once when I had car accident, my front wheel went over the edge of a cliff. Remembering my wife's advice on what to do when in danger, I called out 'Falun Dafa is great! Truthfulness-Compassion-Forbearance is great!' All of a sudden, a powerful force pulled my car backward. The car stopped just next to the cliff. I knew that Master Li [the founder of Falun Gong] had protected me. Words cannot express my appreciation. I'm glad for the chance to sign this petition to show my support.”

Another supporter who witnessed the persecution commented, “My neighbor practices Falun Gong. The CCP harasses this nice guy during every holiday or legislative session of the Party. He is forced to leave home. The CCP even claims to offer people a safe and happy life. That's nonsense! Good people cannot lead a good life in this society. Only corrupt officials and thugs get what they want. Even though I am a commoner who cannot help more, I support you by signing this petition.”

A policeman asked a practitioner, “The situation in our country is so bad. What difference can we make?” The practitioner said, “There is a good way. We are collecting signatures to demand that the CCP stop persecuting Falun Gong. Can you join the effort?” The policeman agreed, “Yes. Let me sign the petition as a way of support.”

Along with practitioners' steadfast efforts in clarifying the facts of the persecution and the spread of the Nine Commentaries on the Communist Party , more and more people have become aware of the truth. More than 160 million people have quit the CCP and its affiliated organizations. Many have seen this growing movement as a spiritual awakening, as Chinese citizens seek inner peace by disassociating themselves from a political party that has committed so many crimes against the people.

Meanwhile, many senior CCP officials and main perpetrators of the persecution have been arrested, imprisoned or are under investigation for corruption. This includes former mayor of Chongqing Bo Xilai, former Chongqing police chief Wang Lijun, head of the 610 Office Li Dongsheng, and security chief Zhou Yongkang. Although the official reason for their demise has been corruption, many believe that they are meeting with karmic retribution for persecuting Falun Gong.

“Seize the Opportunity to Do Your Part: Submit an Article to Celebrate World Falun Dafa Day”