(Minghui.org) The Shilin Official Residence, a popular tourism site in Taipei, Taiwan, attracts hundreds of tourists every day. Many local Falun Dafa practitioners collaborate to maintain a truth-clarification site at the location. It has become, for Chinese tourists, a way to access the facts about Falun Gong and quitting the Chinese Communist Party (CCP) and its affiliated organizations.

A group of Falun Dafa practitioners set up a row of display boards to the right of the gate each day, which inform visitors about Falun Dafa's spread to over 100 countries and regions, its health benefits, and about the thousands of proclamations from different levels of governments around the world. Facts about the persecution, including the forced live organ harvesting crimes, are also exposed.

The Shilin Official Residence is the former residence of late Republic of China President Chiang Kai-shek. It has been open to the public since 1996 and is a popular place for viewing the gardens of both Chinese and Western style horticulture. 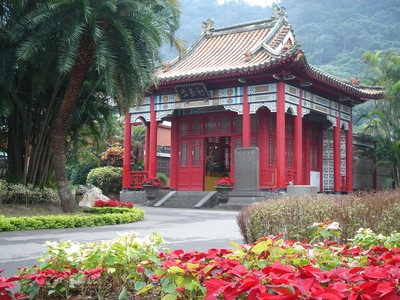 “Why Should I Go Down with the CCP After Being Forced to Join?”

Ms. Lu Shu, who regularly volunteers at the site, met a Chinese tourist in his fifties from Jiangsu Province about three months ago. He didn't look at the display boards, but instead went directly to her and asked, “Why do you claim that heaven will destroy the CCP? Why are you so sure that anyone who doesn't quit the CCP and its affiliated organizations will be implicated when the CCP meets its retribution?” They chatted for a long time before he left.

He returned the next day and had long discussions with another practitioner. He still looked confused when he left.

He came back the third day and asked Ms. Lu a different question. “Some of us were forced to join the CCP, but we didn't want to join. Will we be implicated too?”

Ms. Lu responded, “You were forced to join the Party a long time ago. But now you have learned the evil nature of the CCP and the countless bad deeds it has done. Millions of innocent Chinese people died in the political campaigns. During the past 15 years, the party has been brutally persecuting the Falun Gong practitioners, even forcibly taking their organs to sell for profit. The cosmos will not allow such an atrocity to continue. Even if the human justice system can't punish it, God and Buddha will. The CCP is doomed.”

“I know the CCP is bad. But why must I quit the party?” he asked.

Lu explained: “When you joined the party, you made a vow by raising your fist under the flag of the Party. You vowed to give your entire life to the Party. You became a member of the Party. The more people who join the Party, the stronger the Party becomes. With millions of members like you, the Party becomes impervious to reason and persecutes the Chinese people. You can say you were forced to join, but now you have learned its evil nature, and you have the freedom to make a new choice. This is your willing choice. So if you don't quit, you will have no excuse when you become a scapegoat and are implicated in the future. Think clearly and make your own decision which will govern your future and safety.”

“Sister, you've convinced me. I want to quit the CCP.” He took out a small piece of paper from the inner chest pocket of his suit and handed it to Ms. Lu. “This is the alias I wanted to use to quit the CCP.”

He looked closely while Ms. Lu wrote down the pseudonym on a form for quitting the CCP and its affiliated organizations. When this was completed, he thanked Ms. Lu again. His eyes were red and wet.

A Father and a Teenage Daughter 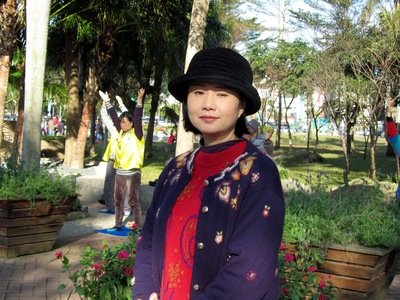 Ms. Tsu Yupei is an artist who comes to the site every week to help Chinese people quit the CCP.

Ms. Tsu Yupei is a practitioner and artist who comes to the site every week. About three months ago, she met a pair of father and daughter tourists. Seeing that they had been reading the display boards for a while, Yupei greeted the tall and handsome-looking father. He said that he had already quit the CCP. He pointed to the pretty girl and said, “This is my daughter.” He then walked away but watched them expectantly from a distance.

Yupei talked to the daughter, answered her questions about Falun Gong, and cleared her doubts fostered by the CCP propaganda. In the end, Yupei said to her, “Your father is a wise man. He has already quit the CCP. Are you willing to quit the Youth League and Young Pioneers to ensure a safe and successful life?” She agreed and quit the two affiliated organizations. The father then returned, and they took a few more printed materials to read.

On another day, a female tourist, who looked to be in her forties, appeared to be thinking deeply while sitting on a stone step beside the truth-clarification site. Ms. Tsu noticed that she had talked to the practitioners and had learned a lot about the CCP and the persecution of Falun Gong, but had not yet agreed to quit the CCP.

Yupei walked over to her and said, “It (quitting the CCP) really means your safety and life. You should be courageous and make the right choice.” The lady raised her head to look at Yupei and said, “I decided. I quit!” She held Yupei's hands and thanked her, “I have overcome many ideological obstacles. I am finally free!”

Volunteer: Spread the Benefit of Dafa to Others

Ms. Lu Shu, 72, has gone to the site nearly every day for the past seven years. She became a successful entrepreneur of a garment factory when she was 33 years old. But her health and wealth had gone in opposite directions.

By the time she was 55, she had a lot of sickness, including insomnia, allergy, skin rashes, and back pain, and depended on pills. One day in 1997, she could no longer bear the never ending pain, itch, running nose, stomach ache and back pain, she tried committing suicide by overdosing on pills. But she was revived. Upon hearing about her suicidal incident, her elder sister living in Keelung City mailed the book Zhuan Falun to her.

Out of curiosity, she opened the book and was immediately attracted to to the cultivation exercises. Within a week after she started practicing the exercises, her insomnia had disappeared. Within three months, all her illnesses had disappeared. Besides regaining physical health, Lu Shu was also spiritually uplifted. “After cultivating in Falun Dafa, I finally understood the value and meaning of life. And I found the direction of life.” 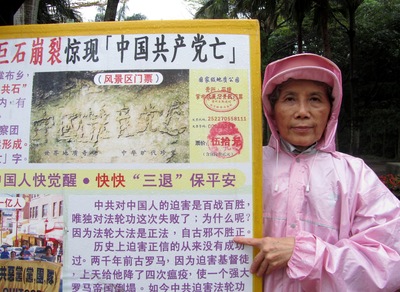 “Such magnificent and beautiful exercises have been slammed and persecuted by the Chinese Communist Party. The Falun Gong practitioners in China are subject to tortures and incarcerations, even forced organ harvesting. The Chinese people have been deceived by the CCP propaganda and will be buried when the CCP meets its demise. I feel an obligation to tell them the truth and to save their lives.”