UK: The Spirit of the April 25th Peaceful Demonstration Celebrated in London

(Minghui.org) “It [the peaceful demonstration on April 25, 1999] was unprecedented in Chinese history that Chinese expressed themselves in a peaceful and rational manner,” commented Mr. Wan, a Chinese artist who has lived in the UK for over 20 years, upon seeing Falun Gong practitioners in London's Chinatown on April 26, 2014.

“The peaceful rationality of Falun Gong [practitioners] is unprecedented, and their non-violent resistance to the persecution has lasted such a long time. History will take note,” Mr. Wan continued. He doesn't practice Falun Gong, but acknowledges that Falun Gong is a traditional belief system that has the power to change China for the better.

Peter Graham, founder and musician of the World Culture Association, said that Falun Gong practitioners' long-term persistent non-violent resistance demonstrates real strength, it's the right way to put an end to the CCP's persecution, and it bespeaks the future. 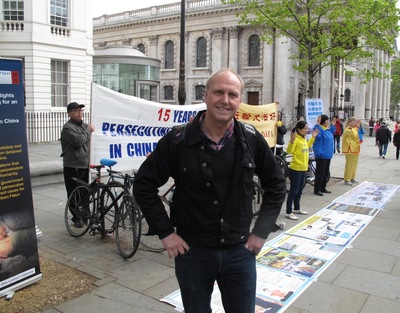 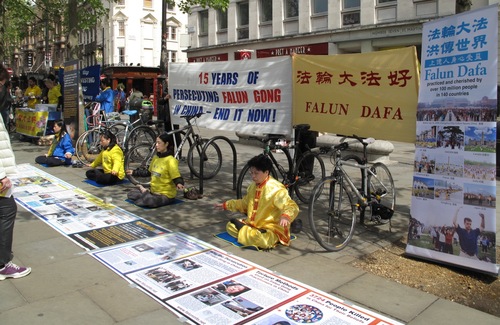 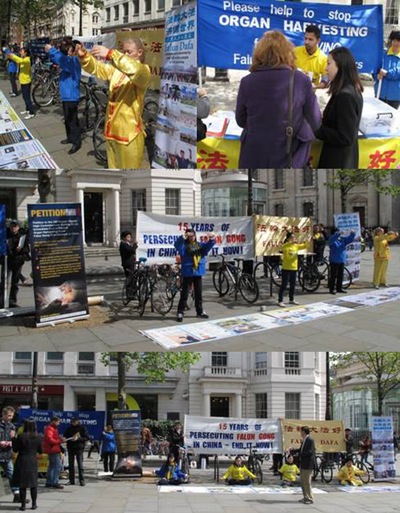 Practitioners in the UK raise awareness about the persecution of Falun Gong at St. Martin's Place in the center of London to commemorate April 25 peaceful demonstration 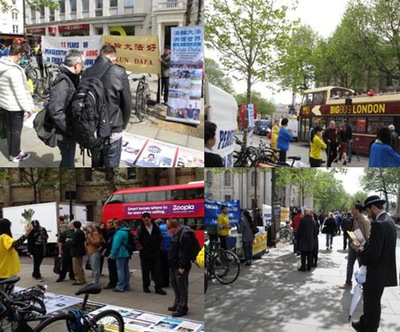 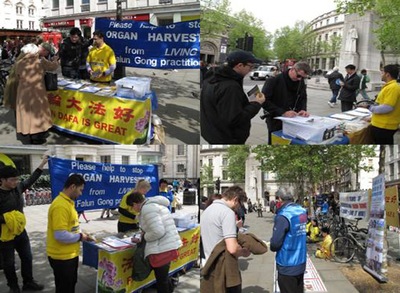 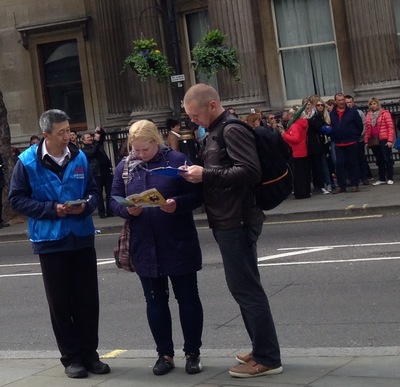 Mr. Zhu (left), a Falun Gong practitioner and local resident, took the day off to join the activity to commemorate the 15 th anniversary of the peaceful demonstration on April 25, 1999.

Mr. Yu, who just moved to London from China not long ago, participated in the April 25 peaceful demonstration in 1999.

Mr. Yu and his 83-year-old mother, together with dozens of practitioners from their practice site at Beijing's Renmin University, joined the over 10,000 practitioners who quietly demonstrated in Beijing, asking that the law reaffirm their right to practice and that a number of practitioners detained by police in Tianjin be released. The 10,000 left peacefully later that day, after then-Chinese Premier Zhu Rongji met with Falun Gong representatives. Zhu agreed to release the Tianjin practitioners and gave assurances that the government did not oppose Falun Gong.

To Mr. Yu, the quiet spiritual strength still shines today: “During the entire demonstration, every practitioner was calm and quiet. Some non-practitioners who were also present grew upset from time to time, yet practitioners nearby would calm them down and maintained the overall peace.”

“At the beginning, every practitioner quietly stood there, reading Zhuan Falun , the main book of Falun Gong, and later we sat down in rows. Many police officers were mobilized and stood in two to three rows, facing us, but most of them left later, and the few police officers who remained began chatting with each other while smoking cigarettes.” Mr. Yu added, “They relaxed after witnessing that these people were so disciplined and in good order. Practitioners kept the sidewalks clean, and left sufficient room on the sidewalks for pedestrians to pass by. The street traffic also continued to flow as usual.”

The same spirit has continued for the past 15 years, Mr. Yu said, as practitioners in China and around the world have stood up against the brutal persecution while adhering to Falun Gong's teachings of Truthfulness-Compassion-Forbearance.

“My Miraculous Recovery After Being in a Coma for Forty Days”