(Minghui.org) Fifteen years ago, on April 25, 1999, over 10,000 Falun Gong practitioners held a peaceful demonstration in Beijing to request the restoration of their right to practice their belief. Never before seen in China, in terms of scope and calmness, the quiet demonstration has become a landmark of uncompromising courage in the safeguarding of justice and conscience. Every year in April, Falun Gong practitioners across the world hold various activities to commemorate this event. 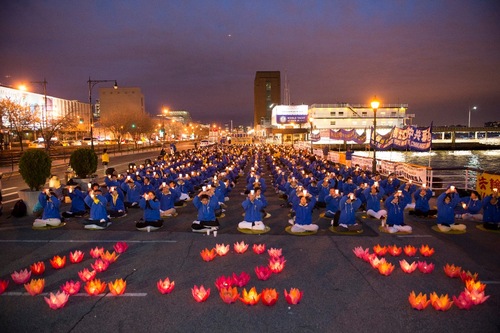 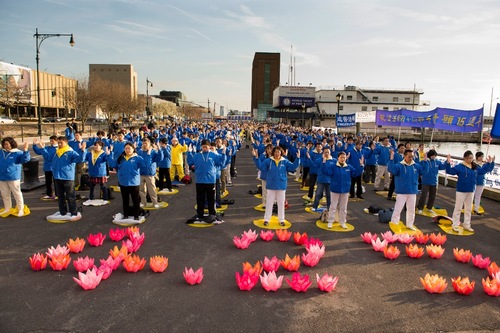 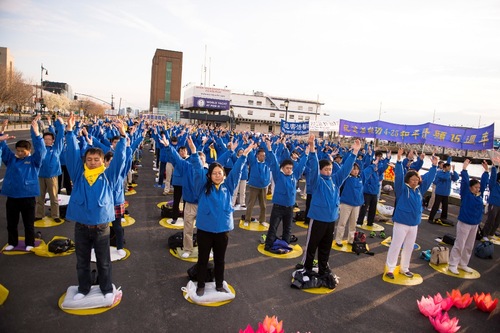 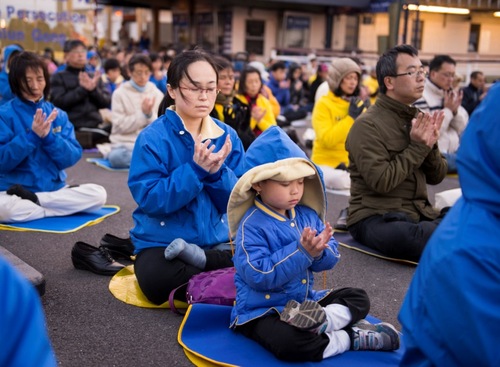 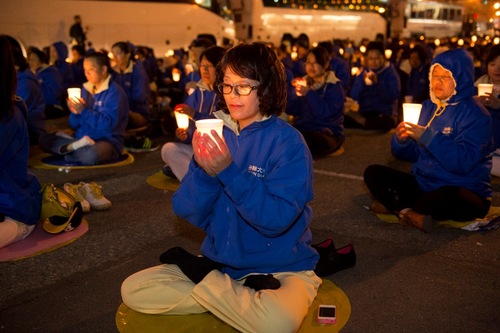 Falun Gong practitioners commemorate the 15 th anniversary of the April 25 peaceful demonstration on the pier beside the Chinese Consulate in New York on April 25, 2014

Memories of the April 25 Demonstration

Dai Liguo started practicing Falun Gong in 1995. Her arthritis and herniated lumbar disc, which had plagued her for more than ten years, disappeared after practicing Falun Dafa for just over 20 days.

“After we arrived there, I saw elderly practitioners sitting quietly at the end of the lines. I was in my 40s, and stood in front and practiced the exercises. It was very quiet. Some police officers came forward to talk with us and took photos. There were some vehicles driving back and forth. Some practitioners went to nearby grocery stores to buy water and bread at around noon. We collected trash and put it into plastic bags after eating.”

After receiving positive feedback from then Chinese Premier Zhu Rongji, everyone felt that the issue was resolved. Ms. Dai returned to Jinzhou that evening.

Just three months later, on July 20, 1999, the Chinese Communist Party (CCP) would initiate a nationwide persecution of Falun Gong. Under a genocidal policy, the CCP attempted to eliminate Falun Gong within three months. The regime mobilized its entire state apparatus, from the military, police, propaganda organs, to the court system, to persecute Falun Gong with violence and deceit. Dai Liguo's life was turned upside down. The police harassed her constantly. She went to Beijing to appeal in October of that year. The police arrested her and brutally beat her. She was sent to Masanjia Forced Labor Camp and suffered unimaginable tortures.

The April 25 Demonstration Brings Falun Gong to the World Stage

Practitioner Zenon Dolnyckyj from New York said that not many people knew about Falun Gong at that time. “Western media outlets reprinted the Chinese media's slanderous reports. I felt an invisible oppression even in Canada, half-way around the world from China,” he recalled.

But in Western countries, the CCP's lies were quickly debunked. Zenon's mother also started practicing Falun Gong and her health improved as a result. Zenon expressed appreciation to Falun Gong practitioners in China for their courage to let the world know about Falun Gong.

More and more people have come to know about Falun Gong and the persecution in China as a result of Falun Gong practitioners' continuous efforts to expose the facts.

Ms. Hannah Martinez, a singer who lives near the Chinese Consulate, passed by the practitioners' event on the pier and said to a correspondent that she knew, that Falun Gong practitioners are good people. She said that over the last few years she has seen many people practicing Falun Gong there at this time almost every year. She believes that it is their right. She said in China, this right is deprived by the regime. Ms. Martinez believes that God will bless them and their rights will be restored.

Ms. Wang, another passerby, was told that the peaceful demonstration in Beijing in 1999 was just like the practitioners doing the exercises quietly in front of her now. She could not understand how such a peaceful group was later brutally persecuted in China. “One should not be arrested if one hasn't broken the law,” said Ms. Wang. She commended the practitioners for their courage to stand up to injustice.

“Conversation with Overseas Chinese Regarding the April 25 Demonstration”