Inspiring Kindness: Looking Back at April 25, 1999

(Minghui.org) During the 2011 Christmas holidays, several Hong Kong newspapers reported an inspiring story: At gunpoint and under threat of a bomb, a 41-year-old cashier at a convenience store persuaded the thief to abandon his intent to rob the store, and flee the scene. People wondered where this cashier's strength and courage came from.

The cashier was a Falun Gong practitioner. His take was, “As a practitioner, I cannot go along with such criminal acts. I have to be responsible to society. My master teaches me to be a good person, living according to Truthfulness-Compassion-Forbearance. I didn't want the thief to harm himself by committing a robbery.”

This incident was not an exception. The peaceful demonstration by Falun Gong practitioners on April 25, 1999, was driven by a similar rationale. 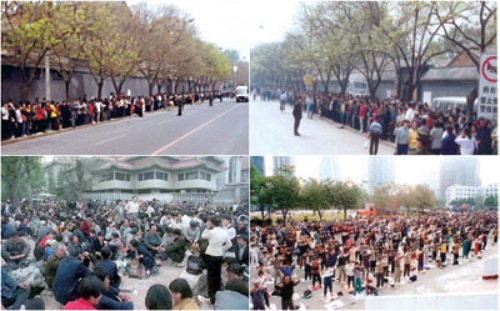 On that day, over 10,000 practitioners quietly demonstrated in Beijing. They had three requests, that the practitioners arrested in Tianjin be released, that their legal right to practice be recognized, and that the ban on publishing Falun Gong materials be lifted. The 10,000 left peacefully later that day, after then-Chinese Premier Zhu Rongji met with Falun Gong representatives. Zhu agreed to release the Tianjin practitioners and gave assurances that the government did not oppose Falun Gong. 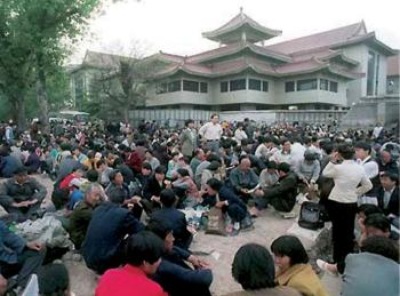 The immediate reason that practitioners went to Beijing was the arrest and detention of 45 practitioners in Tianjin. Other practitioners learned from the government of Tianjin, a directly-controlled municipality, that the Minister of Public Security was involved, and that the issue could only be resolved with an authorization from Beijing.

On April 11, 1999, an article entitled, “I Do Not Agree with Youth Practicing Qigong” was published in the Tianjin College of Education’s Youth Reader magazine. Examples which slandered Falun Gong were listed, and were the same as those presented on a Beijing TV station program in 1998.

Those examples had already been fully corrected in Beijing shortly after the TV program was aired the year before.

When the Tianjin article appeared, some practitioners in Tianjin felt that they simply needed to explain the facts to the Tianjin officials. They also hoped to lessen the negative impact of the article through contact with the magazine editors.

On April 18-24, 1999, practitioners visited the Tianjin College of Education and related governmental agencies to reach a solution.

On April 23-24, 1999, the Public Security Bureau of Tianjin dispatched riot police to beat the practitioners who had come to speak with Tianjin officials, resulting in injuries to the practitioners and the arrests of 45.

From attacks in the media in previous years, to physical violence against practitioners in Tianjin, the escalation of the persecution was alarming. Word of the “Tianjin incident” spread rapidly all across the country.

The pattern of harassment started as early as 1996.

Guangming Daily , the mouthpiece of the State Council, published an article by a columnist denouncing Falun Gong on June 17, 1996. On July 24, 1996, the Chinese News Publication Office issued a nationwide circular banning the distribution of all Falun Gong publications.

In early 1997, the Public Security Bureau began a nationwide investigation to gather evidence in hopes of casting Falun Gong as an “evil cult.” However, police stations all around the country finally reported after much investigation, “No evidence found so far,” and the investigations came to an end.

In late May 1998, He Zuoxiu denounced Falun Gong in an interview on Beijing Television, saying that it was harmful. Next, when showing an interview at a Falun Gong practice site, the program said that Falun Gong was “feudalistic superstition.”

Soon after, the TV station made the correction by airing a positive program on Falun Gong.

The First Division of the Public Security Bureau issued on July 21, 1998, a 1998-No. 555 circular “Notification Regarding Starting an Investigation on Falun Gong.” The “Notification” claimed that some practitioners were engaged in illegal activities in the name of Falun Gong. As a result of this “notification,” the local Public Security Departments in a number of areas around the country raided Falun Gong practice sites, forcibly dispersed practitioners, searched their homes, broke into and entered their residences, confiscated private property, and so on.

Many think that the April 25 demonstration precipitated the persecution of Falun Gong, which officially began on July 20, 1999. In reality, given the three-year pattern of escalating harassment prior to April 25, 1999, the CCP was already looking for some way to justify the persecution.

The demonstration was an effort by practitioners to thwart a crackdown in the making. It was an attempt to benefit all members of society, including the Chinese Communist Party (CCP).

When innocent people are being harmed, everyone is responsible for bringing it to an end. The events of April 25, 1999, showcased the dignity of a group of Chinese people and their commitment to upholding their beliefs and justice.

Over the past 15 years, practitioners have continued to show the same spirit by clarifying the facts about Falun Gong and the persecution, winning increasing grassroots support in China. These citizens who live by Truthfulness-Compassion-Forbearance have become the cornerstone of Chinese society.

“Canada: MP Offers Congratulations on the 22nd Anniversary of Falun Dafa's Introduction to the Public”