She was monitored by police officers from the Chengzhong Police Station, Liyang City on November 8, 2013, and was then illegally arrested. She was interrogated that night.

She was later taken to the Changzhou City Detention Center where she was held in shackles and tortured. She was beaten by guard Xie Chen who grabbed her hair and dragged her around the floor.

She has been arrested many times since the onset of the persecution and was sentenced to forced labor in July 2010.

The following is Ms. Xie's account of what she experienced:

Despite my blood pressure having reached 235/125 mmHg, my hands were tied and my feet shackled by guards Xie Chen and Zhang Zhuyin, as well as the deputy director of the detention center with the surname of Wan.

Forced to Work and Physically and Mentally Tortured

I was tortured until I was black and blue and my extremities were numb. Even so, they continued to torture me. I was verbally abused by Yang Xueping and Ma Ling, the two head inmates. They stopped me from eating if I didn't eat fast enough, and I was forced to do extensive cleaning chores, which included washing the inmates' dishes after every meal.

Yang Xueping and Ma Ling, two head inmates, verbally abused me. I was beaten by Xie Chen, the head guard for half an hour on February 11, 2014. I told Wan who said that Xie's beatings were nothing. She would take eight seconds to kill me or have me crawl on the floor. Then she corrected herself and said, “It does not need eight seconds. I can beat you to death within two seconds. You still function normally after Xie beat you. This can't be called beating.” 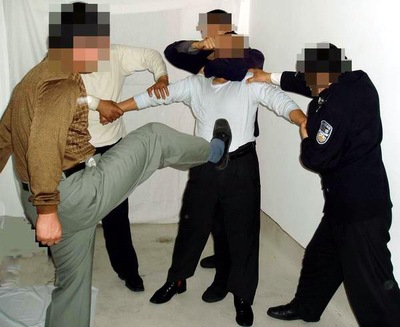 When Xie found out that I had spoken to Wan, she threatened me and demanded I give her in writing that she had not beaten me.

Because of torture and maltreatment, I contracted anemia and suffered from malnutrition. Despite my unhealthy condition, I was forced to work the second and third shift from 1:50 a.m. To 4:50 a.m. and from 12:00 p.m. to 2:00 p.m respectively.

Xie not only tortured me physically but also mentally. She told inmates not to talk to me. When I asked her why she treated a person who practices “Truthfulness-Compassion-Forbearance” this way. She replied, “If I do not treat you this way, the Party will arrest me.”

I became emaciated because I wasn't given hygienic food. What I ate was not even given to animals. Most of the food was moldy, rotten and smelled awful.

The guards, physicians and inmates at the detention center thought of some more ways to torture me. They were afraid that I wouldn't swallow the medicine and therefore handcuffed me for an hour and stopped me from using the restroom. Once I wanted to throw up I was told if I dared to I would have to eat the vomit.

They tried to brainwash me by verbally abusing Falun Gong and Teacher Mr. Li Hongzhi, (the founder of Falun Gong).

I was taken to the Changzhou City First People's Hospital where my hands and legs were locked to a bed. I was in handcuffs and shackles even when I ate, slept, and used the restroom.

After several months of torture, I came down with uremia, hyperthyroidism, high blood pressure and anemia. Yet, they continued to torture me.