(Minghui.org) After failing to get any response from the authorities, Falun Gong practitioner Mr. Li Shujun's 78-year-old mother recently took to the streets to urge people to help get her son released. She held a sign that read, “Holding a belief is not a crime. Immediately release my son Li Shujun.”

Mr. Li was tried on March 28, 2014. After the trial, the mother and other family members asked four times to meet with secretary Song Changjiang of the Xingcheng City Stability Maintenance Office. Their requests were refused with various excuses. 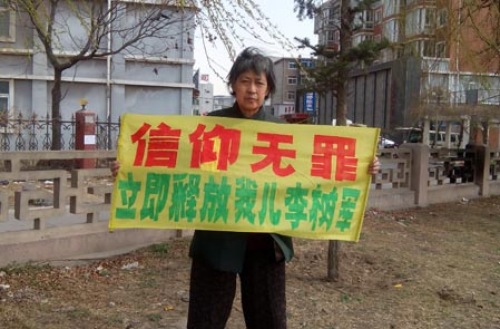 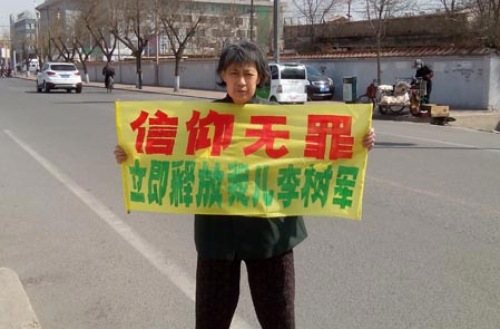 Mr. Li's mother carries sign that reads “Holding a belief is not a crime. Immediately release my son Li Shujun.”

Mr. Li's arm was injured during the arrest on August 24, 2013, and he can no longer move his wrist. He requested treatment, but was refused by the detention center. His mother has visited all public security agencies to ask that he receive treatment, but to no avail.

The mother wrote to the president of the Xingcheng City Court and judge Cui Baomin, “My son used to suffer many illnesses, but he returned to good health within three months of practicing Falun Gong. To a poor family like ours, it is a blessing. To our nation, it relieves government's financial burden. Is it a violation of law to follow such a practice?”

Mr. Li Shujun was tried at the Xingcheng City Court in Liaoning Province on March 28, 2014. Mr. Li's attorney pleaded not guilty on behalf of his client, telling the court that practicing Falun Gong is legal. His defense was frequently interrupted by presiding judge Cui Baomin. The court adjourned abruptly because the prosecutor had no comments or arguments regarding the defense.

The trial was originally set for March 27, 2014, but was changed to March 28, 2014. On the trial day, the Xingcheng City Court restricted entry to the courtroom because many people showed up to observe the trial. All observers had to be photographed and no more than 20 were allowed to enter the courtroom. Falun Gong practitioners were prohibited to observe the trial. When the defense attorney took pictures of the photographer, his cell phone was confiscated.

The defense attorney refused to enter the courtroom because of the restrictions on court attendance. But, he was pushed into the room by force. The secretary of the Xingcheng City Politics and Legal Affairs Committee (PLAC) threatened to have his license revoked.

People that were prohibited from entering the court room argued that observing a trial is the basic right of a citizen. In the end, a total of 20 persons were allowed to observe the trial.

Police from the Xingcheng City PLAC, 610 Office, Police Department, Domestic Security Division, and Gucheng Police Station broke into Mr. Li's home on the evening of August 24, 3013. His mother was at home alone and was petrified when seeing many people with handcuffs. They ransacked her home and confiscated many items. Before they left, they said to her, “Tell your son to report to the Domestic Security Division when he comes home.” Mr. Li was illegally arrested on his way home that night.

“Colleagues and Employers Inspired by the Goodness of Falun Gong”