(Minghui.org) On April 4-6, 2014, Falun Gong practitioners in Romania held a three-day event in the Iulius shopping mall in Cluj-Napoca, the second most populous city in Romania.

The practitioners introduced Falun Gong and its principles of Truthfulness-Compassion-Forbearance. They also exposed the brutal persecution of Falun Gong taking place in China. The infringement of basic human rights in China caught the attention of many passersby. 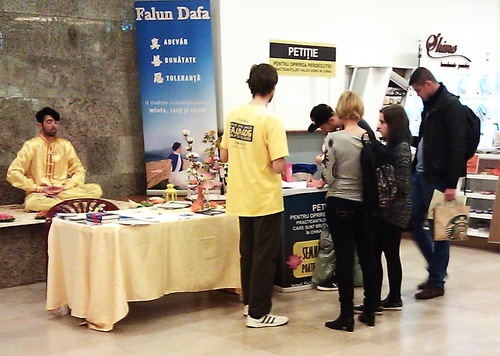 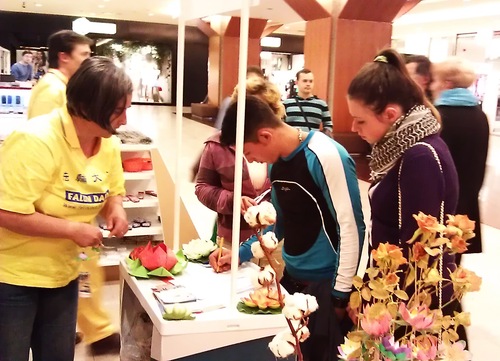 Residents in Cluj-Napoca, Romania sign a petition condemning the persecution of Falun Gong.

Cluj-Napoca is one of the most important academic, cultural, industrial, and business centers in northwestern Romania. Kind-hearted residents were shocked upon hearing about the brutality of the Chinese Communist Party's (CCP) persecution. Many expressed their sympathy for the innocent Falun Gong practitioners and signed the petition condemning the persecution.

Falun Dafa, also known as Falun Gong, has been embraced and practiced by more than 100 million people in more than 100 countries throughout the world since its first introduction to the public in 1992. It was introduced to Romania in 1998, when the first exercise instruction class was held.

The main book of Falun Dafa, Zhuan Falun was translated into Romanian, and the Romania Falun Dafa Association was established in 2003.