Mr. Pan Wei, a villager from Tangjia Village, Qingshan Township, Nong'an County, Jilin Province, became illness-free after practicing Falun Gong. He held himself strictly to the standards of Truthfulness-Compassion-Forbearance and volunteered to fix a road for the village. After the Chinese Communist Party (CCP) began to persecute Falun Gong in 1999, Mr. Pan was harassed, arrested, detained, held in forced labor camps, and subjected to cruel torture. On October 29, 2008, he passed away at the age of 56. 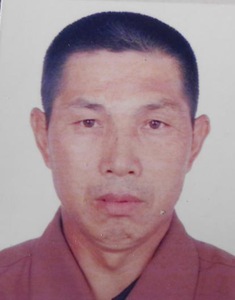 On March 3, 2000, Mr. Pan was taken to a brainwashing center run by Qingshan Township and subjected to brainwashing in an attempt to force him to renounce his belief in Falun Gong. A few days later, he was transferred to Nong'an Detention Center.

All the Falun Gong practitioners held at the detention center were assembled in an open field. They were made to stand with their legs spread apart as far as possible and their arms stretched out for more than two hours. If their arms began to drop, guards hit them with leather belts and bamboo sticks. They targeted the joints of the hands and arms.

Mr. Pan's fingers turned black and blue from the beatings. Those who participated in this torture included Li Jun, chief of the Qingshan Police Station; Cheng Xiaofeng, team leader of the No. 3 Criminal Police Team in Nong'an County; Liu Xiaolin from the Baota Police Station in Nong'an County; and Qian Xiangzi, former associate officer from Qingshan Police Station. After 13 days at the detention center, Mr. Pan was released, but he had to submit a meal fee of 500 yuan.

In April 2001, Mr. Pan went to the post office to pay his telephone bill. Qian Xiangzi and Liu Xiaolin saw him, arrested him, and took him to the police station.

In the fall of 2001 when Mr. Pan was going to Nong'an Nursing School to see his son, Qian Xiangzi stopped him halfway down his road, arrested him, and took him to the detention center. They didn't release him until Mr. Pan paid Qian 1,000 yuan and spent another 500 yuan to take him to dinner. On February 4, 2002, the head of the police station, Cai Chengqiu, tricked Mr. Pan into coming to the police station. After he returned, they ransacked his home. His wife was terrified and almost had a relapse of her heart disease.

Late at night on March 6, 2002, Tangjia Village Management and Security Commission secretary Ren Dawei, Qian Xiangzi, and people from Nong'an Police Bureau went to Mr. Pan's home. After Ren tricked him into opening the door, one of the county police took out some materials from his pocket and planted them in Mr. Pan's home to use as evidence against him. Mr. Pan's daughter realized what they were doing and stopped them.

On June 8, 2002, the head of the police station, Cai Chengqiu; Qian Xiangzi; Lou Zhongzi; and their driver broke into Mr. Pan's home. Since nobody was at home, Lou Zhongzi went into their storage room to look for evidence. He left empty handed.

On October 9, 2002, when Mr. Pan was helping his eldest daughter, Ms. Pan Fenghua, with the harvest, Cai Chengqiu from the Qingshan Police Station, Qian Xiangzi, Cheng Xiaofeng, and Liu Xiaolin went to Mr. Pan's home. They arrested Mr. Pan and his daughter and took them to the Nong'an County Detention Center. Ms. Pan was released eight days later, after the police extorted 4,000 yuan from her family.

On January 22, 2003, Mr. Pan was arrested and held at the No. 2 Team in the Chaoyanggou Forced Labor Camp in Changchun City. Team leader Yang Guang, Zhu Shenglin, and a guard by the last name of Liu tortured him brutally. When Zhu asked Mr. Pan if he wanted to be “transformed,” he said no, so Zhu ordered inmates to pour ice cold water over Mr. Pan. They also constantly beat him.

In March 2003, the labor camp held a “strict attack” meeting. Distorting the facts, a person with the last name of Gao threatened Falun Gong practitioners, telling them that they had to “transform.” The following day, Zhu Shenglin went to the cell to ask Mr. Pan if he wanted to be “transformed.” When Mr. Pan refused, Zhu said that Falun Gong practitioners were not trying to be good people. Mr. Pan told him how he helped fix the road after he began to practice Falun Gong. Zhu said, “Well, if you fixed the road where you live, why don't you fix the road in the camp?” He then beat Mr. Pan.

A few inmates came up to Mr. Pan, and dragged him upside down all the way to the guards' office. They stripped him, then shocked him with electric batons. Seeing that they couldn't make him agree to "transform," they beat him with a shovel and another piece of metal. They poured cold water over him, then beat him again. After they got tired, they used pliers to clip the inside of his legs and toenails, ripping out some of his toenails; his other toes were injured. The injuries festered, and didn't heal for over a month. Mr. Pan was beaten into a stupor. He couldn't walk straight, but the guards did not allow anyone to help him. He ended up fainting in the washroom. He had a long cut on his face and his back was badly injured. The wound was still visible after he returned home.

Due to the relentless persecution, Mr. Pan wrote a repentance statement against his will. Later he realized that he should not have done that. The labor camp started each class by counting the number of people who had been “transformed.” On October 4, 2003, when the person in charge Liu Donghua asked those who had been “transformed” to put up their hands, Mr. Pan refused to do so. Liu Donghuo, Zhang Yu, Wang Haibin, and others beat him. Wang Haibin gave him an especially brutal beating, purposefully kicking his chest. For the next few months, Mr. Pan's chest hurt every time he breathed. 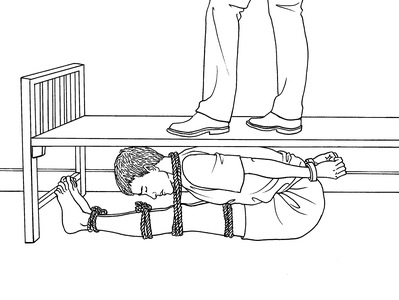 Torture illustration: Being stuffed under the bed

The next day, guard Sun Haibo punched Mr. Pan until his fists hurt. Then he began to hit him with the soles of his shoes. He also shocked Mr. Pan with electric batons, then passed the electric baton to Liu Donghao, who continued shocking him. After a while, Sun Haibo called Mr. Pan into the duty room, where he handcuffed his arms behind his back and hung him up from a bunk bed, with his head between the rungs of the ladder. He removed his pants, hit him with a piece of metal, and used pliers to cut him. The torture continued for more than two hours. He taunted Mr. Pan, asking him if he was in pain.

When Mr. Pan got back to his cell, the other inmates were in bed, but he was forced to sit on a small stool until midnight. They wanted to force him to curse the founder of Falun Dafa. He was handcuffed with his arms behind his back and stuffed under the bed. After he was pulled out from under the bed, they pulled his arms and shook them very hard, causing great pain.

In April 2004, when Mr. Pan's term was up, he was held for another 20 days. His family made extensive rescue efforts before he was released.

Around 2006, the person in charge of the Qingshan Police Station, Guan Baihui, went with another person to Mr. Pan's home, but Mr. Pan managed to escape.

Mr. Pan finally could not take the relentless persecution anymore. On October 29, 2008, he passed away at the age of 56.

“Master Gave Me a Lot, Truly a Lot”