Ms. Pan Guiying Dies as a Result of Physical and Mental Abuse in Prison

(Minghui.org) Falun Gong practitioner Ms. Pan Guiying has died as a result of mental and physical abuse in the Heilongjiang Women's Prison in October 2013, just one year after she was released from prison.

A Chronicle of Ms. Pan's Persecution

Jiangan Police Station officers broke into Ms. Pan's home in July 2008, and Ms. Pan and her two children were taken to the police station. Ms. Pan's son was released after police extorted 6,000 yuan from her family. Her daughter was released after she was forced to write five statements renouncing Falun Gong.

The police interrogated Ms. Pan with torture to extract a confession and to try to force her to give the names of other practitioners. She was taken to the Qiqihar City First Detention Center the same night.

Ms. Pan was sentenced by the Qiqihar City Court in May 2009 to serve four years at Heilongjiang Women's Prison in Harbin. In attempting to “transform” her, the guard brutally tortured her. For example, she was forced to sit still on a small wooden bench. She was also forced to stand straight from 5:30 a.m. to several hours past midnight. 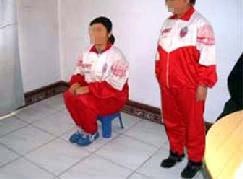 Ms. Pan signed the five statements to give up Falun Gong after being tortured. She changed her mind later, however, and solemnly declared on November 11, 2010, “The 'five statements' I signed are null and void. I will firmly practice Falun Dafa.”

Ms. Pan also resisted doing hard labor. Consequently, the guards tortured her and confined her in an isolation cell for a year. Two prison guards, two collaborators and one inmate worked together to brainwash her. They forced her to watch videos that slandered Falun Gong.

More than 300 practitioners are still detained in Heilongjiang Women's Prison. They are forced to perform heavy labor and write “thought reports” daily.

“Helping People Withdraw from the CCP”