(Minghui.org) After suffering complications from a stroke and being bedridden for over two years, Dr. Gao Jie, a Falun Gong practitioner from Dadianzi Township in Tieling County, Liaoning Province, passed away on January 15, 2014, at the age of 45. 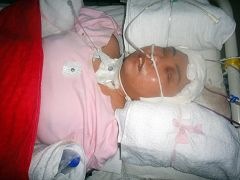 Dr. Gao used to run her own practice and was well respected in the local community. After the persecution of Falun Gong began in 1999, however, she had to close her clinic and move frequently to avoid repeated harassment by the local police.

Following her arrest on November 13, 2007, she developed high blood pressure, blurred speech, and other stroke symptoms. After her release, she again had to move from one place to another to keep from being re-arrested.

Having to live in constant fear, she had a relapse of stroke in May 2010. While seeking medical treatment a month later, she was captured right in the hospital. Worried about her untreated symptoms, her family repeatedly requested her unconditional release but were rejected time and again.

The authorities sentenced Dr. Gao to four-and-half years, but reluctantly released her on medical parole on November 18, 2010, recognizing she was on the verge of death and had been denied admission three times by prison officials.

However, they sent people to harass her on the very night of her homecoming. Not long afterwards, she had a brain hemorrhage. Though she survived, she became totally paralyzed. She was dull-eyed and unable to move or talk. She also had no recollection of what happened to her.

When Dr. Gao died, her husband and fellow practitioner Mr. Dong Qinyu had been home for just a year after serving a five-year sentence.

In order to avoid further arrest, Dr. Gao had to leave home and play “hide and seek” with the police all the time. Such stress really took a toll on her health, and she had a relapse of stroke in May 2010, two and half years after the first episode.

Though lacking the power to arrest her, judge Li still managed to take Dr. Gao away and get her admitted by Tieling City Detention Center, despite her high blood pressure and stroke symptoms.

Dr. Gao's family was extremely concerned about her condition and repeatedly asked judge Li and the detention center authorities to release her, but to no avail.

When her parents were finally allowed to see her in mid-August after paying a so-called “medical examination” fee of 850 yuan, they realized their daughter hadn't been examined or treated. She was getting worse—her face was blank and dull and her speech blurred.

When the elderly couple again pleaded for her release on September 1, 2010, director Shi Yushan of the detention center demanded 6,700 yuan to initiate the process. He was disappointed when they were only able to come up with 2,000 yuan. In retaliation, he told them their daughter would not be released right away even if the full amount were paid a bit later.

Outraged, Dr. Gao's parents warned Shi, “You will be sued if she dies here!” Shi simply blurted out, “Go ahead. I'll step down if she dies.”

Judge Li Zhong sentenced Dr. Gao to four and half years, but reluctantly granted her one year of medical parole and released her on November 18, 2010, after the Shenyang City Prison authorities denied her admission three times in a row.

As a condition of Dr. Gao's release, the detention center officials asked for a 3,000-yuan deposit, but her family firmly refused to pay it.

On the very night of her release, judge Li Zhong, a detention center guard, and officer Li Hongchang from the Dadianzi Township Police Station went to Dr. Gao's home to harass her. They demanded she report to the town police station the very next day and notify them whenever she went out of town. They also warned her that the medical parole was only temporary and she would be taken back to prison as soon as she got better.

Pressured and threatened, Dr. Gao soon had a brain hemorrhage and was rushed to the emergency care at Tieling City Hospital. Though she survived, she became totally paralyzed and had memory and speech loss.

Dr. Gao's husband Mr. Dong Qinyu, also a practitioner, was in prison serving a five year unlawful term at the time. Her 65-year-old mother-in-law thus became the sole caregiver, who also had to care for a young grandson and work the fields. Mr. Dong returned home in the winter of 2012, just one year before his wife's untimely death.

Dr. Gao was well respected among the locals, not just for her medical skills, but, more importantly, for her kindness. She never turned down any patient who lacked the means to pay for her medical services.

Though Dr. Gao helped many villagers recover from their ailments, she herself was plagued with a own brain tumor and gave up hope after numerous failed treatments. To her surprise, her symptoms soon disappeared after she began to practice Falun Gong in 1996.

After the Chinese Communist Party launched the persecution of Falun Gong in 1999, Dr. Gao, her husband Mr. Dong Qinyu, her brother-in-law Mr. Dong Qinfei, and her sister-in-law Ms. Liu Yanfang all went to Beijing to appeal for justice for the wonderful practice.

In order to avoid further arrests, Dr. Gao closed her clinic and left her hometown after her release. She was arrested again while clarifying the facts about Falun Gong on November 13, 2007. Xie Xiangjun and other officers from the Tieling City Domestic Security Division ransacked her rental place and confiscated personal belongings such as Dafa books and a computer.

Implicated by her arrest, her husband was arrested and illegally sentenced to five years at Panjin Prison. Prior to this most recent 2007 incarceration, Mr. Dong was twice jailed before, once at a labor camp for two years and seven months and the other time in a prison for three years.