(Minghui.org) Today's news from mainland China includes incidents of persecution that took place in 14 cities or counties in 8 provinces. According to this report, 11 practitioners were subjected to mistreatment during their detention, and at least 17 practitioners were illegally arrested. 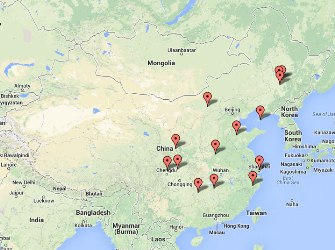 1. [Dalian City, Liaoning Province] Mr. She Yue in Critical Condition Due to Abuse

Mr. She Yue was sentenced to a nine-year prison term in October 2001 and was incarcerated in the Wafangdian Prison where he was subjected to torture. He was arrested and detained again less than two years after being released.

Mr. She's lawyer met him at the Yaojia Detention on February 11, 2014. His physical condition was very weak. He sat in a wheelchair because he could not stand up without assistance.

Mr. Yan Jingyou was arrested on November 29, 2013, and is being held at the Changchun No. 1 Detention Center. According to his family, his case was transferred from the Changchun Police Department to the Changchun Court.

Ms. Che Guizhen, Mr. Hou Tianjun and his wife were arrested by Shi Daguo, director from the Niuweishan Village Public Security Office, Tang Ke from the Nongan County Domestic Security Division, and officers from the Yangshulin County Police Station on the afternoon of February 20, 2014. Mr. Hou's brother, who is not a Falun Gong practitioner, was arrested too.

In addition, officers went to Mr. Dong Shufu's home and harassed his family because his wife is a practitioner.

Ms. Wang Mingqin and Ms. Yu Shufen were arrested by plainclothes officers, including Ge Xuquan, during the afternoon of February 21, 2014, and their homes were ransacked. Ms. Wang was released the next day and Ms. Yu is still being held at the Dehui City Detention Center.

Ms. Bai Huayun was arrested by Zhang Qingping from the Wuyiru Police Station during the afternoon of February 18, 2014, because she distributed Shen Yun Performing Arts disks. She was taken to a detention center on the morning of February 22, 2014.

Mr. Zhou Dongdong was arrested during the afternoon of February 21, 2014, because he talked to people about the persecution of Falun Gong.

Ms. Lou Weili has been held at the Huacheng Detention Center in Yongkang City since she was arrested by officers from the Dongcheng Police Station on July 8, 2013

Mr. Liang Pan, Mr. Ma Yongxian, and Mr. Liu Weibi were arrested by officers from Yanting County in September 2013, when they distributed information about the persecution of Falun Gong. The Yanting County Court held a trial on February 27, 2014.

Ms. Liang Xiuzhen, about 60 years old, was arrested and taken to the Changsha Hexi Police Station on the evening of February 20, 2014, because she talked to people about the persecution of Falun Gong and distributed truth-clarification materials about the practice. Officers from the police station and Hangtian Community confiscated all Falun Gong books at her home. Ms. Liang was taken to the Huoxing District Detention Center the next day and held there for 15 days. Her family was not allowed to visit her.

Mr. Zhong Liancong, Ms. Zeng Xiaoying, Mr. Huang Yuanqiao and Ms. Chen Yi were arrested and taken to the Huaihua Railway Detention Center during the afternoon of February 22, 2014, because they talked to people about the persecution of Falun Gong. Their friends went to the detention center the next morning, and were told that the four practitioners were not there. Their families were not allowed to see them.

Ms. Diao Kaiyun and Ms. Chen Yunqun were arrested and taken to the Shifang City Detention Center by officers from the Yuanshi Police Station at around 10 a.m. on February 16, 2014, when they talked to people about the persecution of Falun Gong.

Ms. Shi Yumei was arrested at home by plainclothes officers during the evening of February 19, 2014. She is being held at a detention center.

Ms. Wang Weiping, 38, sentenced to an 18-year prison term, was tortured by officers from the No. 1 Division at the Tianshui Prison. She has been detained in a small cell with four people monitoring her.

Mr. Li Tianzeng, 32, was sentenced to a four-year prison term, and Mr. Zhang Zhijie, 35, to a three-year and six-month prison term. They were detained at the No. 6 Division. The practitioners were tortured with electric shock batons on November 23, 2012. Mr. Li was once in solitary confinement for about half a month and given only two small bowls of corn soup and two buns a day.

Mr. Shen Xuehe, arrested at midnight on July 9, 2012, was tortured with electric batons by officers including Liu Jiangtao, who shocked his head.

Mr. Zhang Zhijie was electrically shocked by officers, including Dong Zhaoji, around May 1, 2013, because he transcribed the main book of Falun Gong Zhuan Falun.