Ms. Li Dongxu was arrested at her workplace, the China Petroleum Pipeline Engineering Corporation Northeast Division. The arrest took place on the afternoon of November 11, 2013, by officers from the Shenyang Domestic Security Division and the Minglian Police Station. Ms. Li was tortured and interrogated at the Minglian Police Station. The police stripped her and threatened to use electric batons to shock her private parts. Ms. Li's mother, who is in her 80s, had to intervene to rescue her.

Officers from Hunhewan Police Station in Shenyang arrested Ms. Zhu Lanying, 61, on the afternoon of October 14, 2013. On November 4, practitioner Ms. Li Fangfang went to the police station with Ms. Zhu's family and asked for her release. The police arrested and beat them.

Mr. Yu Ming, 42, owns a successful clothing company with over 100 employees. Mr. Yu was taken into custody on September 24, 2013. On November 27, Mr. Yu's arrest was officially announced by the police. On December 9, his attorney went to the First Detention Center of Shenyang City to visit him and was not allowed to see him for the eighth time. Mr. Yu is currently forced to wear handcuffs and shackles and is locked in an iron cage. He is not given any food. The authorities torture him by stabbing wooden sticks underneath his fingernails. 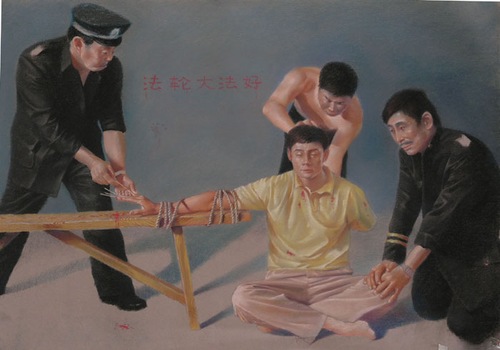 Mr. Zhang Baiwan from the Hunnan District in Shenyang, was arrested. His wife, who was also a Falun Gong practitioner, was also taken into custody at the Hunan Flower Market.

Ms. Wu Yun and Ms. Zhao Sumei from Liaozhong County in Shenyang, were also taken into custody, as well as Ms. Wang Guilan from Shenyang.

Ms. Tian Shuchun from Shenyang is in her 50s. On February 10, 2014, officers from the Huanggu District Domestic Security Division arrested her. Her whereabouts are unknown.

Ms. Zhao Jingzhen from Shenyang was speaking to people about the facts of Falun Gong on February 8, 2014, in a market near the Fifth Barn in the Dadong District. She was taken into custody by the Jinqiao Street Office in Dadong District. On February 11, Dadong Police Department officers informed Ms. Zhao's family that she was detained in the Shenyang City Detention Center.

Officers from the Huanggu Police Department arrested Ms. Tang Shi and her mother.

Ms. Chen Rong is from Guangxi Province and lived in Shenyang. In December 2013, police in Shenyang arrested her.

“Summary Report: The Role of China's Brainwashing Centers in the Torture Deaths of Falun Gong Practitioners”