(Minghui.org) Today's news from China includes persecution that took place in 6 cities or counties in 5 provinces. According to this report, 1 practitioner was subjected to mistreatment during detention, and at least 14 practitioners were illegally arrested . 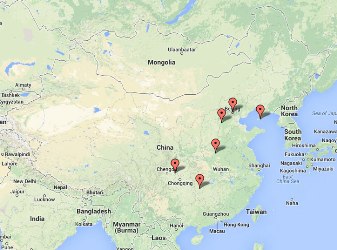 Officers from the Dalianwan Police Station and the Zhonghualu Police Station arrested Mr. Jin Xinnian, manager of Linuo-Paradigma Solar Energy Company, on December 26, 2013. Mr. Jin is being held at the Yaojia Detention Center.

When Mr. Jin's wife, Ms. Liu Zuona; daughter, Ms. Jin Fan'er; and practitioner Ms. Li went to the Qianguan Police Station to request Mr. Jin's release on the morning of February 28, 2014, the police held them. Ms. Liu was taken to the Yaojia Detention Center. Ms. Li and Ms. Jin were taken to the Drug Rehabilitation Center.

Ms. Yao Siping, in her 50s, was arrested at home by the local police on the night of February 27, 2014. She is being held at the Xicheng Detention Center.

Ms. Zhang Xiurong and Ms. Chen Cuihua and her husband were arrested on the morning of March 3, 2014.

Ms. Yang Hemei was taken to the Donghuanlu Police Station for distributing flyers about Falun Gong on March 3, 2014. Her home was ransacked. The police took her computer, printer, DVD, and other belongings. Her husband, Mr. Chen Pengfei, was arrested afterwards.

Mr. Zhang Jinsuo from Ciyu Town, Lingshou County, was arrested at home by Tian Bingjiang and other officers from the Ciyu Police Station on February 26, 2014. His home was ransacked. The police took Falun Dafa books and informational materials. Mr. Zhang was taken to the Lingshou Detention Center.

Ms. Lu Xiulian was taken to the Sanshengyuan Township Police Station by the local police on the same day.

6. [Chenxi County, Hunan Province] Additional Information about the Arrest of Ms. He Xiaoling

Ms. He Xiaoling from Chenxi was arrested and taken to the Pushi Police Station when she went to Pushi Town, Luxi County, to distribute Falun Gong materials on February 21, 2014. She was released that evening.

The police broke into Ms. He's home on the morning of February 26, 2014, and arrested her. Ms. He is being held at the Chenxi County Detention Center.