(Minghui.org) The Canadian government raised the issue of state-sanctioned organ harvesting in China on March 12, 2014, during the 25th regular session of the United Nations Human Rights Council. 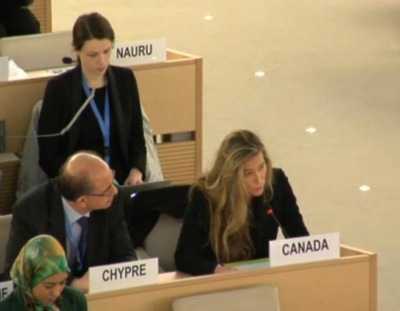 Ms. Anne-Tamara Lorre, the UN representative from Canada, explained that advancing and protecting religious freedom is a focus of Canada's foreign policy.

The UN Human Rights Council's official daily press release documented her speech on March 12, “Canada remained deeply concerned about the plight of persecuted religious communities in various parts of the world where, either due to government restrictions or extreme social hostilities, individuals were targeted because of their faith. It also remained concerned that Falun Gong practitioners and other religious worshippers in China faced persecution; further, reports that organ transplants took place without free and informed consent of the donor were troubling.”

As usual, officials of the Chinese Communist Party (CCP) denied forced organ harvesting. However, they couldn't explain the large numbers of organs available for transplant in China.

According to a March 12 report on Ming Pao , a Hong Kong daily newspaper, Huang Jiefu, former minister of health, verified that death row prisoners still “donate” organs without their own or their families' consent. He also said that such “donations” involved a very close circle of doctors, courts, and armed police, and would be difficult to illustrate.

Independent investigators David Kilgour, a former Canadian diplomat and crown prosecutor, and renowned international human rights attorney David Matas, concluded that 41,500 transplants from unidentified sources occurred during 2001 and 2005. Given other related evidence, they stated that the source of the 41,500 organs could only be explained by the equally large number of imprisoned Falun Gong practitioners being used as a live organ bank.

Support for ending organ harvesting in China has been on the rise, with countries around the world taking action to condemn this atrocity and prevent its citizens from becoming unknowing accomplices.

The Italian Senate's Human Rights Commission unanimously passed a resolution on March 5, 2014, urging the Italian government to launch a thorough investigation into organ harvesting in China through diplomatic and other channels. The resolution also urges the Chinese Communist Party (CCP) to immediately release prisoners of conscience, including Falun Gong practitioners.

The Illinois House of Representatives passed a resolution on February 26, 2014, urging, “the United States government and the U.S. President to investigate organ transplants in China and take all reasonable steps to bring an end to the revolting practice of harvesting organs from living Falun Gong practitioners for transplants.”

The European Union Parliament passed a resolution “expressing deep concern” over “credible reports of systematic, state-sanctioned organ harvesting from non-consenting prisoners of conscience” on December 12, 2013. It was jointly proposed by 56 members from four political parties in the EU Parliament.

The resolution calls on the EU and its member states to publicly condemn organ transplant abuses in the People’s Republic of China (PRC), and to raise awareness about the issue among citizens traveling to the PRC. It also calls upon the EU to conduct a full and transparent investigation into organ transplant practices in the PRC.

The parliament made a point of stating that China's plan to phase out harvesting organs from prisoners “only by 2015” is not acceptable, and calls upon China “to immediately end the practice of organ harvesting from prisoners of conscience and members of religious and ethnic minority groups.”

Irwin Cotler, a liberal Member of Parliament (MP) and former Minister of Justice of Canada, on February 28, 2014 called for excluding China from the UN Human Rights Council due to the Chinese regime's involvement in widespread and systematic violations of human rights, including harvesting organs from living Falun Gong practitioners.

There is also a pending resolution in the US Congress, condemning the large-scale organ harvesting of non-consenting prisoners of conscience, mainly Falun Gong practitioners.

The Chinese Communist Party (CCP) launched a nationwide persecution of Falun Gong on July 20, 1999. In his desperate attempt to crush Falun Gong, then CCP chief Jiang Zemin issued a series of secret orders, including, “Ruin their reputations, bankrupt them financially, and destroy them physically,” “Beat them to death and count the deaths as suicide,” and “Cremate them without verifying their identities.”

3,746 deaths have been confirmed. The deaths occurred in over 30 provinces, directly-controlled municipalities, and autonomous prefectures.

Organ harvesting from living Falun Gong practitioners was first reported in 2006. The crime is yet to be fully exposed.

Latest Art & Music
Drawing: Explaining the Facts of Falun Gong Regardless of Wind and Snow
- Jan 17, 2014