(Minghui.org) Falun Gong practitioner, YueE, 70, from Taitung, Taiwan, started practicing Falun Dafa in 2003. She used to be computer illiterate, but now makes phone calls to the police in China from a computer, to clarify the truth about Falun Dafa. Starting at 8:00 a.m. she makes daily phone calls to China.

For example, after seeing information about a practitioner in China who had been arrested by police, YueE called immediately. A deputy head of the police department picked up the call and she said, “Please do not participate in the persecution. Falun Gong practitioners are all good people.”

The person said that he was not involved, and YueE helped him to do the three withdrawals (withdrawing from the Chinese Communist Party and affiliated organizations). She told him that he must find ways of releasing the detained practitioners.

She told us, “From his tone, I felt that he has previously been told the facts about Falun Dafa and already understood it.” 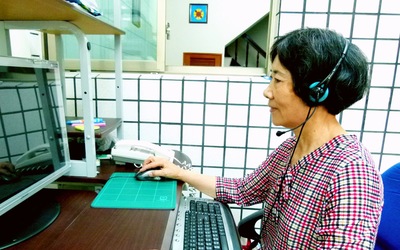 YueE learned to be computer literate 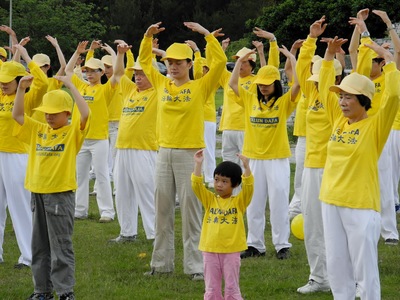 YueE (right) participates in group exercises with her granddaughter 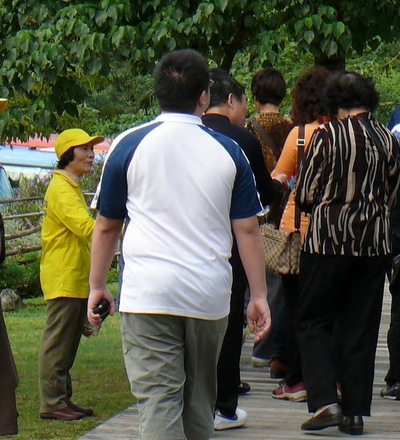 YueE has been making phone calls daily for seven years, but only three years ago started clarifying the truth to the police. Although in the past she was timid, she has gained courage and self-confidence.

YuE was not in good health before starting to practice Falun Dafa in 2003, when her sister Yue Qin introduced the practice to her. Her health is now much better, as she studies the Fa and practices the exercises regularly.

She said that she used to suffer from illnesses, felt uncomfortable, and had to be rushed to the hospital emergency room every few days. She is better now, but still worries about her health.

Learning to be Independent and Walking Her Own Path

YueE's husband passed away suddenly due to an illness in 2005. Therefore, she moved in with her son in Taitung.

YueE went on her bicycle to the group practice and study site. After some time of cultivating, she was ready to help her daughter-in-law in making three meals a day, cleaning the house, and taking care of her granddaughter. Her son and daughter-in-law not only support Falun Dafa, but also have began practicing.

YueE's daily schedule is very tight. She gets up at 4:30 a.m. to do the exercises, and starts making phone calls at 8:00 a.m. She takes a short break at noon and then continues making calls. She starts preparing dinner at 4:00 p.m. and looks at her granddaughter's homework. At night, she studies the Falun Dafa books.

YueE feel that her wisdom has opened from studying the Fa. Not only does she enlighten on the Fa principles, it also helps her when talking about Dafa.

YueE said, “In the past, I did not really use my head to think. I have now learned how to think.” She prints out truth-clarification information that other practitioners have emailed to her, after choosing the appropriate content.

She tells others that she learned to use a computer at her age, “You will gain if you are not afraid of trouble.”

Save Practitioners and Those Deceived by the CCP's Lies

For her it is important that the rescue effort is not restricted to rescuing the practitioner, but also talking to the persecutors about the persecution, and awaking their conscience. She knows that the police officers have been deceived by the CCP lies, and have lost their original natures.

One practitioner in China was being persecuted, and YueE called the court to talk about the details of the case. The other party asked, “How did you know?” She said, “It has been published in the Internet. This phone call to you is for your own good. Please do not commit a crime.”

The person explained that he was following his superior's orders in handling the case. YueE responded, “The Chinese Constitution stipulates that cultivation is legal. It is illegal to persecute.” She wanted him to tell the attorney, “Support justice, and release the Falun Gong practitioner unconditionally.”

She also told him that there are at least several hundred thousand people practicing Falun Gong in Taiwan, and also helped him to do the three withdrawals.

In a recent phone call concerning a court case, a man answered the phone, and after listening to information about Falun Dafa, she asked him if the practitioner was in the detention center. He said yes. She said, “Are you able to ask her to pick up the phone?” He said yes.

YueE told the practitioner that she is calling from Taiwan and asked, “How are you?” She said, “Good! Good! Thank you for your concern! How did you know me?” YueE replied, “Dafa disciples must have righteous thoughts and righteous actions.” The practitioner said, “Yes! Yes! Thank you!”

The man then hung up the phone, but the short conversation touched YueE very much. She said, “This is the first time that I have talked to a practitioner in detention.” This practitioner was released three days later.

YuE participated in promoting the Shen Yun Performing Arts show last year. She was not shy or afraid, and regardless of the people she met, be it a company head or school principal, she talked about the show confidently, and many people purchased tickets.

To help more people personally appreciate the beauty of Shen Yun, YueE made the effort to understand Shen Yun's distinguishing features, such as the Chinese classical dance, the high-tech, dynamic backdrop, the magnificence of the orchestra, the production of the handmade costumes, and the transmission of the essence of China's 5,000 years of divine culture. She said, “Once I really understood the meaning of the Shen Yun performance I was able to talk about it, and the cells in my entire body were filled with self-confidence.”

When the Shen Yun performers went on their world tour in 2014, YueE told her friends about it. Many people were thankful for learning about the show. A principal who lived near her home bought four tickets for his family and even let her promote the Shen Yun show at his school.

This year she was filled with regrets, “I have not promoted the Shen Yun shows for so many years because I was too embarrassed to open my mouth.”

YueE previously had a quick temper and her family would just give in. Once she realized that she had turned in to a nag who always wanted her way, she worked hard on eliminating this bad habit. She thinks that she has eliminated 70 percent of that habit, “Cultivators talk about forbearance. Now, I need to keep forbearance in my mind and must cultivate speech.”

YueE said, “My greatest new year wish is to continue to elevate my xinxing and eliminate bad attachments. At the same time, I want to work hard to help even more Chinese see through the CCP lies, choose kindness and justice, and become good people.”

“I Learned Falun Dafa In a Forced Labor Camp”