(Minghui.org) Falun Gong practitioners in Denmark held an event on March 8, 2014, at the City Hall Square in Copenhagen to inform locals and tourists about the forced organ harvesting in China. Many people signed the petition organized by Doctors against Forced Organ Harvesting (DAFOH) to condemn the heinous crime and call for an end of the persecution of Falun Gong. 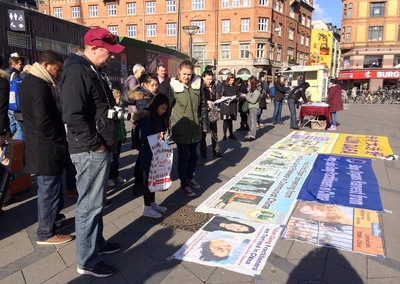 Crowds gather to learn about Falun Gong and the persecution at the City Hall Square in Copenhagen on March 8, 2014 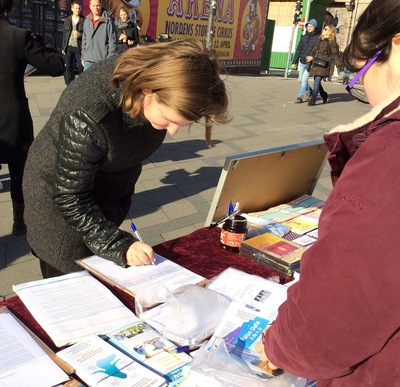 A woman signs the DAFOH petition

A Chinese student currently studying in the United Kingdom stopped at the event when he saw the banner “Stop Organ Harvesting from Living Falun Gong Practitioners in China.” He took a picture and said he would research more about organ harvesting.

A practitioner told him: “Most organizations in the world allow voluntary enrollment and resignation. Only evil cults do not let people quit. The Chinese Communist Party (CCP) is such an evil cult that it controls Chinese people's minds. Students all have to join the Communist Young Pioneers without being given a choice. Most are forced into the Communist Youth League in middle school and senior high.

“When they grow up, they have to join the CCP if they want career development. Then they swear that they will fight for the CCP for the rest of their lives and pledge their lives to the CCP. By doing this, Chinese people have unknowingly handed to the CCP their lives and futures. Isn't this evil?”

The student agreed and said, “Makes sense.” He then took a copy of the Nine Commentaries on Communist Party.

He had one more question: “What do we do if the CCP collapses?” The practitioner said, “The CCP and China are two different things. China will still go on even without the CCP.” He understood and renounced his membership to the Communist Youth League.

Over 10 Chinese people renounced the CCP and its affiliated organizations at the event that afternoon.

A couple and their child were attracted by the peaceful exercise music. The family stopped by and read the posters laid on the ground and watched practitioners demonstrate the exercises. Upon learning about the persecution, the parents signed the DAFOH petition. They also planned to learn the exercises at a group exercise site.

March 8 was the man's birthday. The woman said, “This is the best birthday gift for him.” He happens to be interested in China and has visited there four times. However, this was the first time that he learned about the persecution of Falun Gong in China.

A woman signed the petition and signed another copy on behalf of her husband. She said she hoped more people would step forward to end the atrocities.

An American tourist took pictures of practitioners and posters on the ground. He said he has seen many events held by Falun Gong practitioners and has thus gained more knowledge of the situation in China. He said, “You will definitely succeed. The divine will help you.”

“On the 12th Anniversary of Tapping into State Television to Broadcast the Truth about Falun Gong: Remembering the Heroes (Part 2 of 3)”