(Minghui.org) More and more governmental organizations and individuals have condemned the forced organ harvesting of living Falun Gong practitioners in China and called for a thorough investigation of this “unprecedented form of evil on this planet.”

The combination of short wait times, in as little as two weeks, for a matching organ in China, the lack of organ donors due to cultural reasons, a large number of missing Falun Gong practitioners, and the overlapping time-line of the persecution of Falun Gong and sharp increase of number of organ transplants performed in China point to the only likely explanation: a huge live organ pool exists in China and Falun Gong practitioners are killed on demand for their organs. 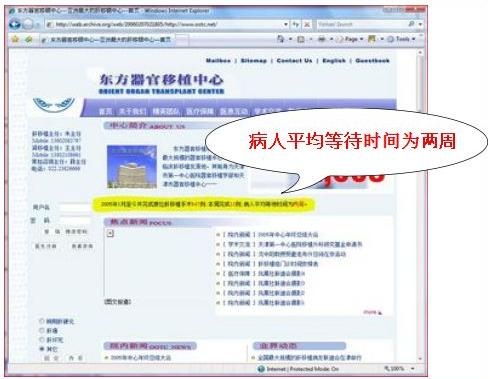 A 2006 screen shot of the home page of Oriental Organ Transplant Center in Tianjin. The highlighted texts in Chinese state that “average waiting time for a liver is two weeks.”

Informants provided more investigation leads in 2013 regarding such crimes in Tianjin:

A friend in Tianjin revealed a recent transplant deal at the Oriental Organ Transplant Center in September 2013.

One of her relatives had kidney disease. The Oriental Organ Transplant Center suggested a kidney transplant and found a matching kidney within one week.

The patient's family was told to make a 560,000 yuan deposit; however, no receipt would be issued. The payment also did not include the cost of surgery, hospital stay, or medicine.

The patient's family sold their apartment and exhausted their savings to make the payment. The hospital then required a contract to keep the procedure confidential.

A soldier in Dandong, Liaoning Province recalled a mass transfer of Falun Gong practitioners from Tianjin to Sujiatun District of Shenyang City: “It was a very cold day in December 2000. Our unit was called on a sudden, urgent mission at around 1:00 a.m. We donned our full gear and surrounded the Dandong Train Station.

“We were ordered to escort the train. Two soldiers were assigned to each box car. Once we got in the car, we were shocked by what we saw: the train was full of Falun Gong practitioners. They were men and women, young and old. We were told that they were arrested because they went to Beijing to appeal for the right to practice Falun Gong. Their wrists were handcuffed and attached to a metal bar at the top of the car, just like how chickens were hung in Chinese delis.

“I don't remember how long we traveled, but we finally arrived at the destination, Sujiatun District of Shenyang City, Liaoning Province [the location of the atrocities of organ harvesting cited by the two informants who broke the news for the first time in 2006].”

A Falun Gong practitioner sent an investigation lead to Minghui.org in April 2013: “One of my relatives asked me to inquire about a liver transplant at the Oriental Organ Transplant Center in Tianjin in January 2006. I went to the center and overheard a conversation between a doctor and a patient's family member.

The doctor said: “He [the patient] is very lucky that a matching liver was found three days after his admission to the hospital. Though that specific one didn't work out, another matching liver became available for a second surgery. We can't guarantee anything, but there's a good chance that it will work out.”

Lead 4: “A Lot of Good Kidney Sources in Those Years”

A reporter is acquainted with a high-ranking government official, who had two kidney transplants in Tianjin around 2004. The first surgery failed, but the second was a success. Today, this official is still in good health.

The reporter wrote to Minghui.org in September 2013: “This official's wife told me about details of his organ transplant over dinner four years ago. The doctor told her that his kidney [the second one] was from a living person, a very healthy one. The doctor also said that there were a lot of kidney sources, good sources, in those years.”

A person assigned by his company to take care of a colleague who received a liver transplant at the Oriental Organ Transplant Center in 2007 noted that his colleague's surgery was one of three scheduled for that day.

The first surgery failed; however, a new liver arrived within 21 hours. Dr. Shen did the second liver transplant for the colleague, which extended his life for another six months.