The mind and body benefits of Falun Gong attracted quite a few visitors at the festival. Many showed an interest in learning the exercises. More were shocked by the brutality of the persecution and expressed their support for Falun Gong.

Richa, a yoga teacher at the booth across from the Falun Gong booth, had quietly observed practitioners demonstrating exercises and speaking to visitors before she stopped by to chat with practitioners. She said that she noticed the peaceful energy from practitioners' booth and would check out the Falun Gong websites.

Another visitor, Margaret, upon learning of the benefits of the practice and the persecution of Falun Gong in China, said sincerely, “The world needs more people like you!” 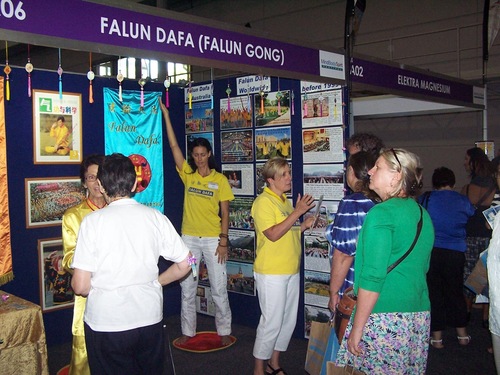 Mrs. Whyte stopped by the Falun Gong booth on the first day of the festival. She called a practitioner the next day and said that she and another six friends would like to learn the exercises and learn more about Falun Gong.

Two other visitors who drove almost three hours to the festival stopped by practitioners' booth twice in the same day. They decided to start learning Falun Gong by joining the weekend group exercise site near their homes. 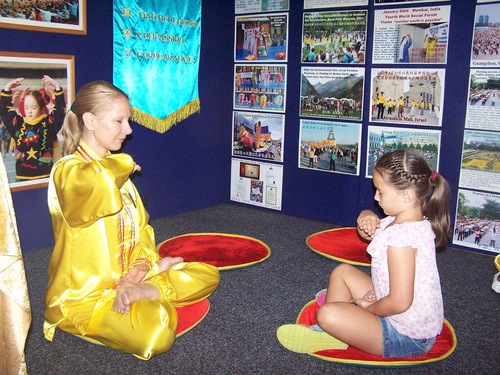 “The Persecution Is Unacceptable!”

A woman told practitioners, “I know a lot about Falun Gong.” She explained that she had done a lot of research on the practice and the persecution while in college. She shared that she learned about Falun Gong's remarkable healing power and mind-and-body improvement. She said that the brutal persecution, especially forced organ harvesting from living practitioners, is unacceptable.

She said that she still couldn't understand how such heinous human rights violations could happen in a modern society. She and her friends indicated that they would try out the exercises upon returning home.