(Minghui.org) The violence surrounding the death of a young attorney in China in 2002 provides insight into the scale of the persecution of Falun Gong at that time.

Mr. Li Jian, an attorney from Zhengyang County, Henan Province, endured intensive physical labor and atrocities that precipitated his death at the Henan Province Third Forced Labor Camp in Xuchang City. At the age of 34, he died around 3 a.m. on April 26, 2002.

Before his death he told the other practitioners: “I am not afraid of being starved. But if they would let me have five minutes of rest, I would be alright.” He never got his wish.

The camp officials claimed that he died from a sudden illness. However, one day before his death, Mr. Li said: “Zho Zhimin, (captain of a subgroup under the Third Division) is extremely vicious. He beat me so hard that I am still in great pain. Ren Gaoqiang (instructor of the Third Division) supported the violence.” 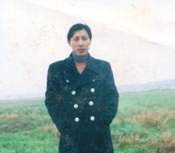 Mr. Li started practicing Falun Gong in 1998. He was arrested in 2000 for producing truth-clarifying materials about Falun Gong and he was illegally sentenced to serve three years in prison. He was taken to the Henan Third Forced Labor Camp in April 2000. He was forced to undergo branwashing, deprived of sleep, and did exhausting physical labor. He endured great physical and mental harm from being tortured with the method of “Tying the Rope.”

As demonstrated in the picture below, in "Tying the Rope" the victim's arms are tied tightly with thin nylon string behind the back, and the string is tied so tight that it cuts into the victim's flesh. The victim is forced to squat with lower legs positioned vertical with the ground. The torturer inserts a wooden stick below the victim's upper arms, causing excruciating pain. The victim is deprived of sleep for several days. The blood circulation is cut off and the victim experiences an increased heart rate, excruciating pain in both arms, and will begin sweating profusely within a few minutes. Some practitioners urinate blood after enduring this torture, but they are nonetheless not released. 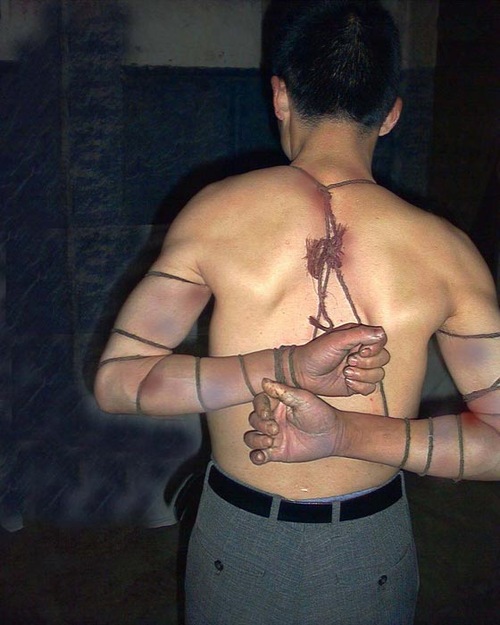 Faced with exhaustion, Mr. Li fell asleep while eating on many occasions. He was unable to withstand the pressure and signed a statement renouncing his belief in Falun Gong in December 2001. However, he declared in March 2002 that the “guarantee statement” he signed was null and void and that he would become a steadfast practitioner again. As a result, the Division chief, Tan Junmin, severely tortured him.

On morning of April 25, 2002, deputy division chief, Jin Weishan, shouted at Mr. Li: “You Falun Gong practitioners are so incompetent when it comes to work, yet we have to feed you. I would be better off raising dogs!"

Tan Junmin scolded Mr. Li in the afternoon: "Why can't you finish the work?" Mr. Li replied: "My body cannot take it. I am really exhausted." Jin Weishan verbally abused and kicked another practitioner, Mr. Ning Xinwei from Sanmenxia City in front of Mr. Li, just to intimidate him.

Mr. Li ended his work after midnight on April 25, 2002. On the way to his cell, Mr. Li said: “I really cannot stand this anymore. They are going to torture me to death.” He was too fatigued to fall sleep and had a shortness of breath. He died that night around 3 a.m.

To skirt responsibility for Mr. Li's death, Tan Junmin waited two hours before he sent his body to the hospital for “emergency rescue.” The hospital performed emergency resuscitation in spite of the body having long been dead. Ren Gaoqiang later concealed the facts of this case.

One Falun Gong practitioner in the camp suggested that every one mourn for three minutes in memory of Mr. Li. The practitioner had six months added to his jail term because of this suggestion.

The guards in the Third Division were on high alert on April 26. The prisoners were not allowed to sit too close to one another at lunch. The guard leaders threatened the prisoners telling them that if anyone did anything because of Mr. Li's death, they would be held accountable. The camp deputy director, Qu Shuangzhai, and the Procuratorate announced in the afternoon: “Li Jian died from illness. Whoever takes advantage of his death to create chaos will be punished by receiving an extended detention term.”

Qu added: “Li's family has accepted these facts. You should too and stop making trouble.”

“We Must Try Our Best to Accomplish Our Mission”

“My Experience of Hiring Lawyers to Rescue Detained Practitioners ”