(Minghui.org) Falun Gong practitioner Ms. Xiang Xiaobo passed away on February 20, 2014, at the age of 55. She was emaciated and suffered a mental collapse before being released on medical parole from Heilongjiang Province Rehabilitation Forced Labor Camp on June 5, 2013. It is believed that she was given poisonous drugs during the eight months she was held there. 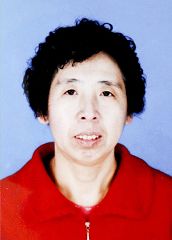 Ms. Xiang was dull-eyed and unresponsive on her return home. She ate very little and mumbled to herself. She tried to run out of the house or stood or sat in one spot for hours without moving and didn't sleep. During the last two months of her life, Mr. Xiang was bedridden, curled up in a ball, and consumed barely any food or water.

She experienced shortness of breath on the afternoon of February 20, 2014. Her 80-year-old mother left the house briefly, and by the time she returned her daughter had died. By the time of her death, she was skin and bones. Her hands had a grayish cast with dark purple patches, and her skin was dry and peeling. 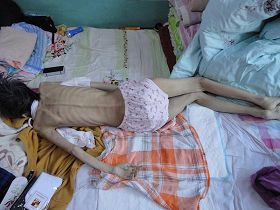 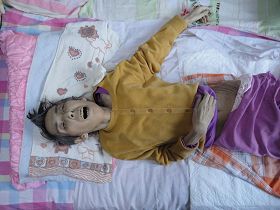 Recent Arrest and the Cause of Her Mental Collapse

Ms. Xiang was later illegally sentenced to two years of forced labor and secretly taken to the Heilongjiang Province Rehabilitation Forced Labor Camp on October 11, 2012. She was subjected to brainwashing, solitary confinement, sitting on a small stool for long periods of time, sleep deprivation, and having her hands handcuffed behind her back.

According to an eyewitness, a guard ordered the criminal inmate assigned to monitor Ms. Xiang to mix a light yellow powder into her soy milk drink. She was also injected with large amount of fluids daily, which the guards said was glucose. Her hands were swollen as a result of the repeated intravenous injections.

Ms. Xiang became very hyper. She sometimes mopped the floor over and over for hours or suddenly started running real fast or talked non-stop facing a wall for hours on end. During her last month in the forced labor camp, she was given shots every single day. She experienced intermittent disorientation and episodes of uncontrollable shouting and screaming at night, which made her nights restless.

Ms. Xiang's parents, both in their 80s, appealed for her release at many public security and government agencies during the eight months she was detained. To evade responsibility, the camp authorities granted her medical parole after she fell seriously ill. Ms. Xiang was escorted back to Jiamusi City on June 5, 2013, by officials from the Xiangyang District Political and Legal Affairs Committee, Xiangyang District Administrative Office, and Jianshe Police Station.

After Falun Gong was banned and the Chinese Communist Party (CCP) launched the persecution in 1999, she was arrested five times and sentenced to forced labor twice. She also was repeatedly harassed and threatened by local police and officials from the Community Residential Committee. Her husband filed for divorce and won the custody of their then 6-year-old daughter. She was also fired from her job as a technician at Jiamusi Chemical Pharmaceutical Factory.

According to incomplete statistics, more than 1,000 female Falun Gong practitioners have been detained in that facility over the past 14 years and suffered severe mental and physical torture. Many are still trying to recover from mental collapse and bodily injuries.

At least three earlier deaths have been confirmed: Ms. Jiang Rongzhen from Jixi City died in November 2002; Ms. Liu Shuling from Qitaihe City died in July 2010; and Ms. Jiang Jingping from Jiamusi City was released on October 31, 2011, and passed away a month later.