(Minghui.org) Ms. Liu Yanqin recounts the abuse and torture that she and other Falun Gong practitioners suffered at Heilongjiang Women's Prison in China.

“We were handcuffed from behind and hung from the top rail of our bunk beds from 5 a.m. to 10 p.m. We were then taken down and handcuffed to the lower bunk rail from 10:05 p.m. to 4:55 a.m. This excruciating torture lasted for two months. When our legs and feet had become swollen, infected, and oozing pus, the guards handcuffed us to the lower bunk rail only. This went on for another two months. Due to the long-term handcuffing, I had to sleep with my hands on my back, even after the handcuffs had been removed!”

Before Ms. Liu started to practice Falun Gong in 1997, she had been suffering from several kinds of illnesses. After practicing for a short while, all of her illnesses disappeared. When the Chinese Communist Party initiated the persecution of Falun Gong in July 1999, it used the full weight of its state-run media to defame and slander the practice. Ms. Liu tried to help the Chinese people learn the facts about Falun Gong by intercepting a TV cable channel and broadcasting relevant information on the practice. She was later arrested and sentenced to four years in Heilongjiang Women's Prison from April 2002 to April 2006. The following is a first-hand account of the tortures that she suffered while imprisoned there.

1. Sitting on a Small Stool for Extended Periods of Time

When fellow practitioners and I refused to perform forced labor in April 2003, brigade heads Kang Yaling and Cui Yan forced us to sit on small stools from 6 a.m. to 8 p.m., for several days in a row. Finally, 10 guards in riot gear and helmets came into our cell to force us to work. 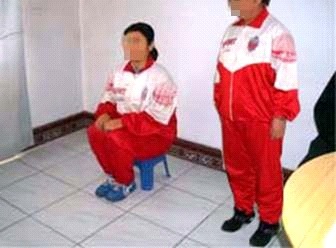 Practitioners were forced to sit on a small stool for extended periods of time.

2. Standing in the Freezing Cold

On October 16, 2003, I, and about 30 other practitioners were forced to stand still from early morning until midnight for not calling out our prison numbers during roll call. We were later dragged outside and forced to run in the bitter November cold, with very little clothing on. When we refused to run, we were forced to stand outside for six days in a row, from 8 a.m. to 4:30 p.m.

3. We Were Hung from the Top Rail of Our Bunk Beds

I was handcuffed and brought back to my cell for not calling out my prison number and for not wearing my name tag during roll call on July 31, 2004. Guards Kang Yazhen, Wu Xuesong, and Cui Yan ordered inmates Li Li, Zhang Qingmei, Fu Xiuling, and Hu Xiaoli to handcuff me and fellow practitioners Li Hongxia, Ba Lijiang, Han Xiongli, Miao Xiaolu, Chen Yunxia, He Chunhua, and Wang Ye from behind and hang us from the top rail of our bunk beds. 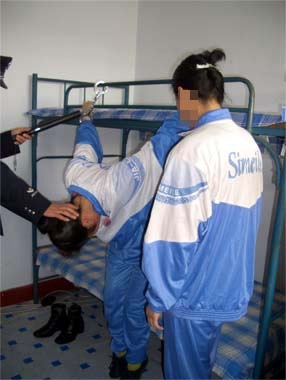 Reenactment: handcuffed from the top rail of a bunk bed

After ten minutes of this torture, I had started to perspire profusely. Inmate Fu Xiuling became alarmed and told guard Kang Yazhen, “Liu Yaqin is going to have a heart attack!” The guard ordered the inmates to remove my handcuffs and sit me on the floor.

4. Handcuffed from Behind and Hung Up for Extended Period of Time

I, and fellow practitioners Han Xiongli, Miao Xiaolu, Chen Yunxia, Sun Guizhi, Li Dongxue, Zheng Hongli, and Shi Shuyuan were locked in a warehouse with the windows completely covered. After Miao Xiaolu had been tortured to near death, she was transferred to the prison clinic. She later died from the physical abuse that she had suffered.

Guard Lin Jia told inmates Zhang Qingmei, Hu Xiaoguang, and Hu Xiaoli to not allow me to fall asleep. The next day, guard Kang Yazhen tried to persuade me to cooperate with the prison management, however, I refused to do so. She then handcuffed me to a water pipe in a washroom and ordered inmate Meng Hong to monitor me so that I didn't fall asleep. I was later transferred to a room next to the restroom where the sleep deprivation continued. Inmate Zhao Yueqin monitored me in the evening, and inmate Wang Jinxia monitored me during the day. I was not allowed to sleep for five consecutive days. 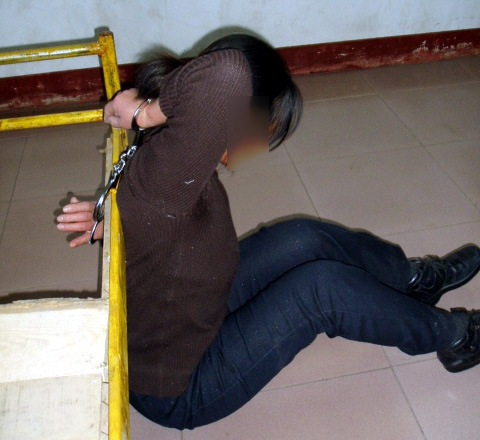 Reenactment: handcuffed from behind

6. I Was Carried to the Prison Gate on the Day of My Release

I was released from prison on April 28, 2006, as per the stated terms of my prison sentence. But I was not let go easily because I refused to wear my name tag and uniform. A guard asked eight inmates to hold me on the ground and forcibly put on my uniform. As soon as they let me up, I took the uniform off. They quickly wrapped me in a quilt and carried me to the prison entrance gate.

While imprisoned, we suffered all sorts of mental, physical, and spiritual abuse. We were under tremendous pressure and stress every day. In addition, my family members were not allowed to visit me until 2005.

Only Falun Gong practitioners were required to have their their blood drawn and be injected with all sorts of dubious so-called “vaccinations.” We were also forced to buy our own bedsheets and socks. If we did not buy them, the prison deducted the amount from the money that our family members deposited into our individual prison “accounts,” which were used to pay for our daily necessities.

“80-Year-Old Practitioner Learns to Use a Computer, Produces Informational Materials for Over Ten Years”