(Minghui.org) Falun Gong practitioner Ms. Liu Xiuping from Lanzhou has been on a hunger strike for eight days, since January 10, 2014. That was the day she was illegally arrested by the Chengguan Domestic Security Division. By January 17 she was in very serious condition.

When her family members went to visit her on January 13, the detention center head refused to let them in.

When her relatives went to visit her again on January 17, they noticed that Ms. Liu was in a terrible state and they learned that she hadn't eaten or had anything to drink for eight days.

The detention center was also worried about her physical condition and in order to avoid responsibility for her possible death, they sent her home on January 18.

Ms. Liu worked at a water plant under the Lanzhou Railway Bureau. She started practicing Falun Gong in 1997 and regained her health. She went to Beijing to appeal for Falun Gong after the persecution started, and was detained in a forced labor camp for two years. Later, she was transferred to a brainwashing center in Gongjiawang, Lanzhou for further persecution, and then sold to a detention center as slave labor.

Her family said that when Ms. Liu returned from Beijing after her release from the labor camp, they saw a three to four inch cut on her head. When she returned from Lanzhou, one of her ears was missing.

Ms. Liu went to appeal for Falun Gong in Beijing at the end of 2000, and was arrested and taken to the Haidian Detention Center. She was stripped naked by guards and forced to stand outside in the freezing weather overnight.

She was sentenced to two years of forced labor in February 2001 and transferred to the Beijing Women's Forced Labor Camp in March.

The guards ordered Ms. Liu to write a guarantee statement to “stop practicing Falun Gong” and to write a “renunciation statement” against Falun Gong's Teacher. When she refused, four people surrounded her to “transform” her. They hit and kicked her, forced her to squat military style with her hands behind her head. She was also forced to stand still for long periods of time and to “fly an airplane” (a torture method of bending forward with her arms pushed up against the wall). The guards grabbed her hair, bashed her head against the wall and pierced her private parts with needles. 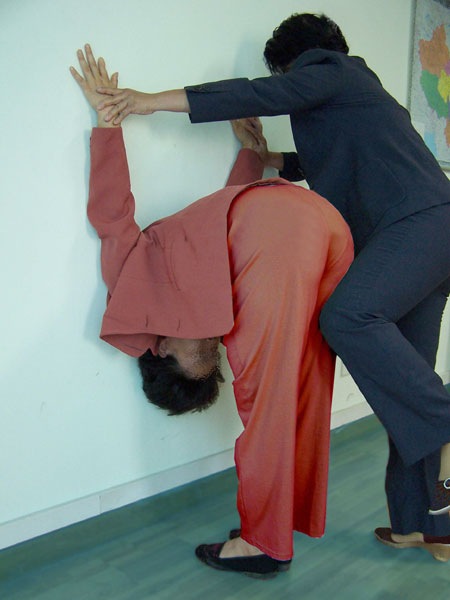 Practitioners were not allowed to sleep if they refused to write the “guarantee statement.” Some practitioners were deprived of sleep for six months, and allowed only two hours of sleep. Ms. Liu was beaten violently by Li Jirong, leader of No. 4 Division. Squad leader Chen Lili sat on top of her and beat her. Ms. Liu's face became red and swollen and her body was covered with black and blue bruises. 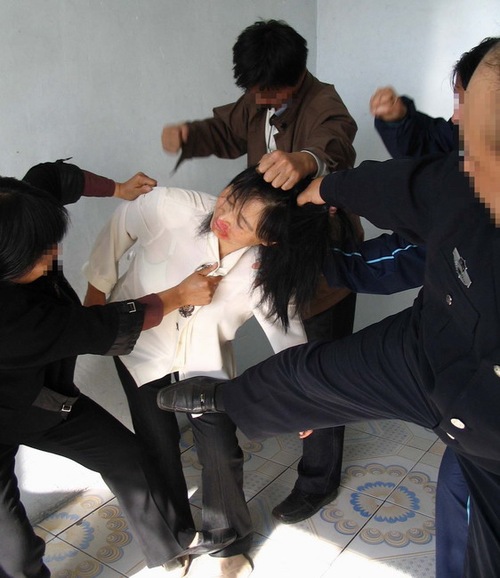 Due to long-term sleep deprivation, Ms. Liu became disoriented in her speech and looked very pale. The police claimed she became that way from practicing Falun Gong. Under this intense mental and physical torture, Ms. Liu suffered a mental breakdown.

Her elderly father passed away due to anxiety and worries about her condition.

After two years of inhuman persecution at the Beijing Women's Forced labor Camp in 2003, she was released and taken home by her family. She did not act like her normal self. She often stayed up all night. She was silent all day long and just stood there with a vacant expression on her face. Blood flowed heavily from her vagina and she also suffered bowel and urinary incontinence. Later, by doing the Falun Gong exercises, she gradually regained her health.

After she returned to work, factory head Li Xiliang continued to put pressure on her to give up practicing. He ordered Ms. Liu to work in the security section so that she could be monitored. She had limited freedom and was told to clean the corridors and toilets every day. Ms. Liu did not complain at all. She did a very good job cleaning and also took good care of the gardens.

Ms. Liu was arrested again while distributing truth-clarification materials on April 30, 2006. She was later taken to a brainwashing center in Gongjiawan, Lanzhou.

When the “Lanzhou Legal Education Center” (brainwashing center) failed to extort money from her workplace and family, they sold her to a forced labor camp at a high price.

Ms. Liu Xiuping was sentenced to two years and six months of forced labor on August 28, 2006 and detained at the Yuzhong Women's Forced Labor Camp. The newcomers were first isolated and watched by six or seven inmates.

Ms. Liu suffered severe beatings and other forms of persecution, including sleep deprivation, not being allowed to wear any clothes, freezing, starvation, and other physical punishments.

She was even beaten for washing her clothes by inmate Li Li. Her basin was trampled on until it was smashed and she was not allowed to put her wet clothes on a line to dry, but they made her wear them wet.

The detainees were forced to do all kinds of work, including making medicine boxes, peeling corn husks, shelling beans, weaving carpets, making Muslim white caps and sewing ornaments on shoes. Everything was labor intensive.

Just when Ms. Liu should have been released, her term was extended by another two months. After she returned home, her family saw that her physical condition was even worse than the first time she was released from the labor camp in Beijing.

When she was detained the second time, her workplace fired her and her husband went to the labor camp to divorce her. He also took their child. All this made her life even harder. After she was released, she had to stay with her relatives.

Ms. Liu suffered enormous mental torment and was unable to go out to work to make a living. She was often penniless and had to collect soft-drink cans to earn money. She would buy a pancake to ease her rumbling, empty stomach as soon as she earned a few yuan.

In order to regain her rights, Ms. Liu studied legal regulations and sought legal assistance. She was busy rushing between her previous employer, law firms, the provincial government, the municipal government and the local People's Congress trying to get her job back.

Three or four years have passed and Ms. Liu hasn't been able to get a cent of compensation. The government departments all shirked their responsibility and even threatened her.

When Ms. Liu was passing a primary school the morning of January 10, she saw some CCP officials slandering Dafa to poison the minds of students and passers-by. Ms. Liu walked up and told them what they were doing was criminal. They refused to listen and called the Chengguan Domestic Security Division to arrest her. She was first taken to the Xicun Police Station and later transferred to the Taocunping Detention Center that afternoon.

“"My Signature Really Had an Impact!"”