(Minghui.org) The Art of Zhen, Shan, Ren International Exhibition opened to the public in the Cultural Hall of Ariel, a progressive city in Israel, on December 26, 2013. “Zhen, Shan, Ren” refer to the main tenets of Falun Dafa—Truthfulness, Compassion, Forbearance—which the artists follow in their daily lives and depict in their work.

Many city dignitaries attended the opening of the exhibition. A film about the artists was also shown at the event.

“We Cannot Be Silent About It”

Mr. Eli Shviro, the mayor of Ariel, spoke of the significance of the exhibition, having learned of the suffering that Falun Dafa practitioners have experienced at the hands of the Chinese communist regime over the past 14 years.

“I am very excited and happy that we can host this exhibition in Ariel,” said the mayor. “This international exhibition speaks for itself. It is about a group of people suffering abuse at the hands of their government. We cannot accept this and we cannot be silent about it. We have experienced something similar in the past, and we need to speak out. So we agreed to hold the exhibition here, so that everyone will be exposed to it, for everyone to see and speak out clearly.” 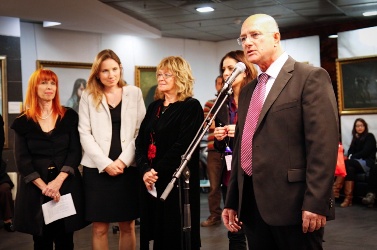 Mr. Eli Shviro, the mayor of Ariel, speaks at the opening ceremony of The Art of Zhen, Shan, Ren International Exhibition.

“I am pleased to curate such a special exhibition, 'Zhen, Shan, Ren,' which speaks of Truth, Compassion, Forbearance,” she said. “Being an artist myself, I think art has a very powerful weight to bring change. The Israeli and Jewish people have known suffering and have experienced cruelty and great loss. We feel great sympathy with the message of this exhibition.” 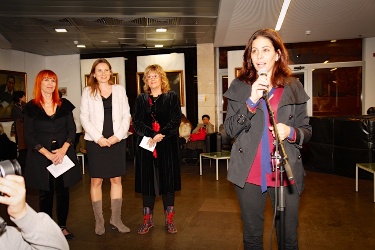 Ms. Shira Dekel Katz, deputy mayor of Ariel, speaks at the opening of the exhibition.

Ms. Shira Dekel Katz, the deputy mayor who oversees the cultural aspects in the city of Ariel, encouraged families to come with their children and tell them the story behind the exhibition. The crowd applauded enthusiastically after each person spoke.

Local media representatives covered the opening of the exhibition. 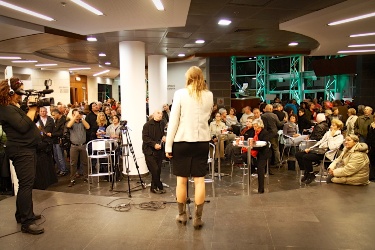 Following the opening ceremony, exhibition representatives were on hand to provide explanations about the paintings. The viewers showed great interest in the works and expressed empathy and shock when they heard about about the crimes committed by the Chinese communist regime. 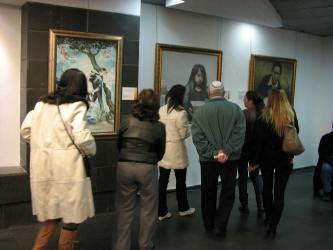 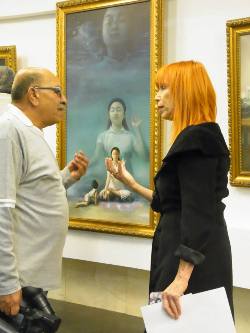 An exhibition representative discusses a painting with an attendee.

“I Never Imagined That It Would Influence Me So Strongly”

In December 2013, The Art of Zhen, Shan, Ren International Exhibition was also held in Ashdod, in the southern part of Israel, where it was sponsored by Boris Gitterman, the deputy mayor and chairman of the Board of Culture and Recreation.

The chairman of the Ashdod Artists Association, Shlomo Ferman, said in an interview: “When I was invited, I knew exactly what the exhibition was about, but I never imagined that it would influence me so strongly. I was particularly impressed by the gaze and the form of expression of the artists, which succeeded in bringing out a sharp and impressive contrast with the oppression in China and oppression around the world. The quality is quite impressive, both in execution and in its ideological concept, which raises to the heart the evil in China.”

Mr. Ferman said the exhibition will certainly leave a deep impression on those who see it.

He shared his personal experience: “Through the exhibition I was introduced to a very terrible thing. [It's] something so inconceivable that human beings can commit such crimes. A number of the pieces have an international composition... I can compare them to the Pieta seen in Italy. This message of suffering is one that each of us should internalize and tell our children and the entire world—[to] stop the suffering and evil in the world.”