(Minghui.org) Falun Gong practitioners took part in this year's ZoomerShow, Canada’s largest consumer show and lifestyle expo for individuals over 45, at the Vancouver Convention Centre on February 22 and 23, 2014. Many people visited the booth to inquire about the health and spiritual benefits of Falun Gong. When they learned about how this wonderful practice is being persecuted in China, many people expressed their support for practitioners' tireless efforts to expose and end the persecution. 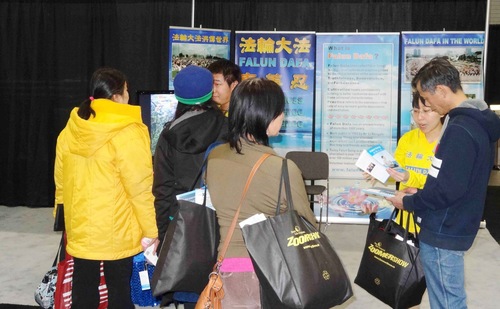 Visitors to the ZoomerShow stop by the Falun Gong booth

Expo Visitors Learn the Exercises at the Expo

Many visitors to the expo were interested in learning the Falun Gong exercises and wanted information about Falun Gong practice sites in their locales. A number of people were impressed by the healing and fitness benefits of the practice. Some were no strangers to eastern meditation practices and said that they planned to learn the exercises at home, using the teaching videos. 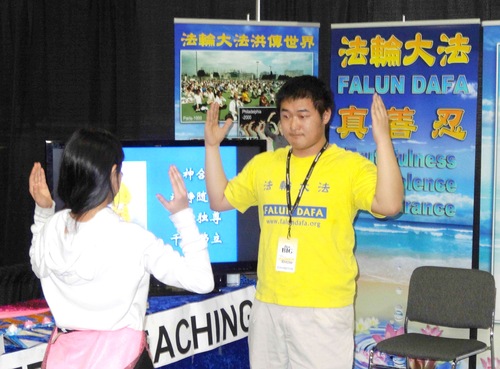 Ms. Wang and her daughter were among the many Chinese people who attended the expo. The daughter spoke to a practitioner first, and then visited the booth again with her mother.

She immediately tried the exercises. Ms. Wang also learned a few movements with her daughter. Both spent a great deal of time at the booth and took a lot of informational materials. They both said that they appreciated being able to learn the exercises.

Due to local practitioners' persistent efforts, many people in Vancouver are already familiar with Falun Gong and the persecution in China. Many took the opportunity to stop by the booth to express their support for Falun Gong or to obtain more information about the practice and the persecution.

One woman told the practitioners that everyone has the right to freedom of belief, and that Falun Gong practitioners in China were no exception. She said that she supported and admired practitioners' faith and their perseverance in peacefully resisting the persecution.

Three Cantonese-speaking Chinese visitors expressed their support for Falun Gong and mentioned that they often saw practitioners in Chinatown.

Mr. Zhang is currently a freshman at a local college. He came to Vancouver from China less than a year ago. As a young person in China, the only information he'd heard about Falun Gong was negative propaganda from the Chinese regime. However, he questioned this information, which prompted him to try to find the true story at the expo.

The practitioners explained that Falun Gong offers great health benefits and helps people become better people by following to the principles of Truth-Compassion-Forbearance. However, out of personal jealousy, former Chinese Communist Party (CCP) leader Jiang Zemin launched a brutal persecution again Falun Gong in July 1999. The persecution has blurred peoples' sense of right and wrong and is part of a huge landslide of morality in China's society. The practitioners explained that good people should distance themselves from the CCP and renounce their memberships in the CCP and/or its affiliated organizations.

Mr. Zhang agreed with the practitioners and quit the Communist Youth League.

“With My Third Eye Open, I Saw that Master Cared and Protected Every Dafa Disciple”

“There Are No Role Models for Falun Dafa Practitioners”