(Minghui.org) Today's news from China includes incidents of persecution that took place in 4 cities or counties in 3 provinces. According to this report, 7 Falun Gong practitioners were subjected to mistreatment during their detention, and at least 3 practitioners were illegally arrested. 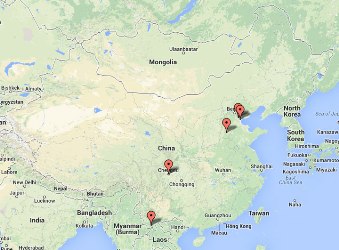 Ms. Li Juxia, 55, Ms. Zhang Jinling, 64, and Ms. Liu Shuxiang, 62, were arrested while hanging a “Falun Dafa is good” banner on the evening of December 12, 2013. Xiaozhai Police Station officers took the practitioners to the police station and held them until the next day. The three were released after the police extorted 10,000 yuan in cash from their families.

Mr. Bo Jie, Ms. Li Yanxia, Mr. Li Yugang, and Ms. Yang Hongmei were put on trial by the Hongqiao Court on the morning of January 27, 2013. The four practitioners are being held at different places.

Ms. Wang Liping is from the Huancui District, Weihai City, Shandong Province. She works in Chengdu City. She was arrested and taken to the Chengdu City Detention Center by officers from the Gaoxin District Police Department on June 22, 2013.

Ms. Li Jianying was arrested for telling people about Falun Gong and taken to a forced labor camp for a two-year term in June 2006. On June 25, 2009, she was arrested for distributing Falun Gong materials. She was then sentenced to four years in prison. Ms. Li is still being harassed by the police.

Ms. Li was followed by police officers on September 29, 2013. Domestic Security Division head Zhang Yunsheng and others broke into and ransacked her home. Ms. Li was detained for 15 days.

Domestic Security Division deputy head He Yiran and five other officers broke in again to ransack her home on January 30, 2014.

“Learning from a Fellow Practitioner's Passing Away (Part 2) ”

“With My Third Eye Open, I Saw that Master Cared and Protected Every Dafa Disciple”