(Minghui.org) Today's news from China includes persecution that took place in 5 cities or counties in 3 provinces. According to this report, 2 practitioner were subjected to mistreatment during detention, and at least 5 practitioners were illegally arrested. 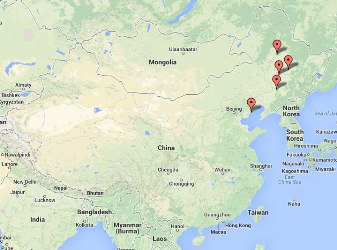 Mr. Zhou Jingliang from Youyi County, in his 50s, was reported to police for viewing a 2014 Shen Yun DVD. The police arrested him at his home on the afternoon of February 26, 2014. He was fined 500 yuan. He is serving a seven-day holding period at the Youyi Township Detention Center.

Mr. Yan Yongjie, 42, was arrested by officers from the Renxing Police Station while he was distributing Falun Gong flyers on the afternoon of February 16, 2014.

Mr. Wang Yufeng, 53, from the Qianshao Farm, Jiansanjiang, was arrested in Harbin by officers from Jiangsu Province on February 24, 2010. He was clarifying the truth on his cell phone. Mr. Wang was sentenced to nine years of imprisonment by the Yixing City Court in Jiangsu Province. He is being held at the Longtan Prison in Nanjing, Jiangsu Province.

Mr. Wang's wife Chang Xueju is a teacher at the Qianshao Farm Elementary School. Her whereabouts are unknown.

Mr. Li Chengwen is a Falun Gong practitioner at Jianbala Village, Taohaotai Township, Qianguo County. He was arrested while putting up Falun Gong banners on January 28, 2014. He is being held at the Guaibodian Detention Center. Officers from the Taohaotai Police Station broke into Mr. Li's home and arrested his wife Wang Limei at noon on February 17, 2014.

“Four Practitioners, Including One in Critical Condition, Appeal Their Illegal Sentences and Request Immediate Release”