Learning the Facts about Falun Gong in Taiwan (Part 1)

(Minghui.org) Chinese tourists visiting the National Palace Museum in Taiwan have the unique opportunity to enjoy and appreciate rare art collections from China's ancient emperors and learn the facts about the persecution of Falun Gong. Both topics are covered up by the Chinese regime and kept from those living in the mainland.

Many of China's highly prized pieces of art from the Palace Museum in Beijing's Forbidden City were evacuated to Taiwan during the Chinese Civil War, which took place from 1927 to 1950. For Chinese tourists visiting Taiwan, the National Palace Museum is therefore a must-see destination. In the square where they get on and off their buses, many are able to see display boards set up each day by local Falun Gong practitioners. 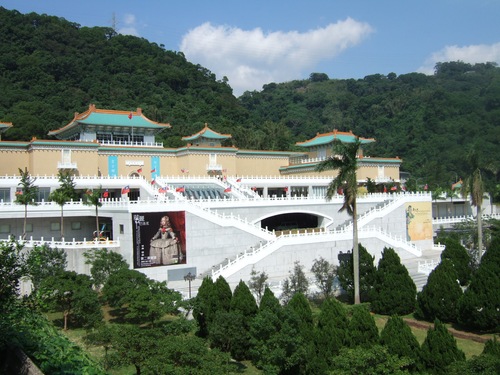 The National Palace Museum is located in Shilin, Taipei, Taiwan. 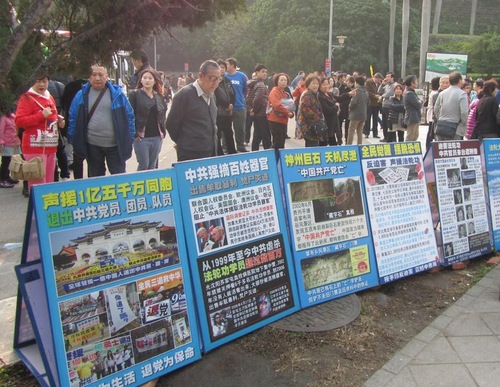 The facts about Falun Gong open a window of free information for mainland tourists.

About 500 vehicles drop off tourists at the square. Taiwan practitioners cover the truth-clarification events on a voluntary basis. They include practitioners young and old, male and female, housewives and professionals. They come to meet Chinese tourists to tell them about the persecution. They also relay their personal experience of benefiting from a practice that is banned in mainland China, yet welcomed by the rest of the world. 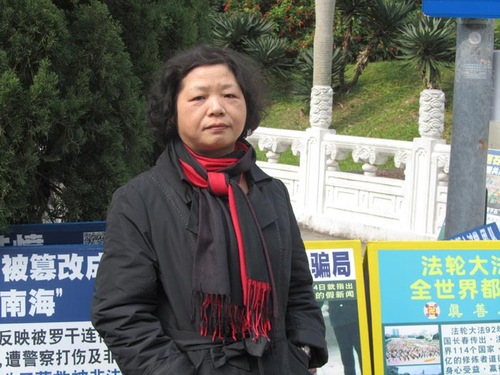 Ms. Liao Shu from the Neihu District in Taipei

Ms. Liao Shu from the Neihu District in Taipei suffered from shoulder pain before practicing Falun Gong. Her husband had mild depression, an illness that his side of the family hid from her prior to their marriage. She hardly ever slept well as a result of her own shoulder pain and her husband's depression. She wondered why life was so unfair.

Ms. Liao obtained some information about Falun Gong in 2000. Within a few days of starting the practice, her insomnia and shoulder pain disappeared. After she retired in May 2013, she clarifies the truth at the National Palace Museum site five days a week.

Oftentimes some Chinese tourists ask her: “How much do you get paid every day? How do you make a living?” Ms. Liao tells them that she is a retired professional and has savings. She says, “We are volunteers here and have paid for these materials out of our own pockets. All of this is for you to know the facts so that you will have a safe future when the Chinese Communist Party (CCP) meets its retribution for persecuting Falun Gong.”

“I Believe Organ Harvesting Is True” 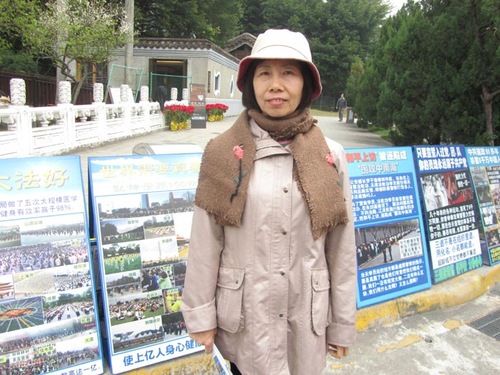 One family member of a Taiwanese businessman who frequents China told Ms. Du Huiqing that she believes that organ harvesting of Falun Gong practitioners is indeed occurring.

Du Huiqing, a retired kindergarten teacher, is volunteering at a university and studying oil painting. Although she obtained a copy of Zhuan Falun in 2006, she didn't start practicing Falun Gong until 2008, when she was diagnosed with breast cancer.

Ms. Du says that some Chinese tourists thought the persecution had stopped because they have seldom heard about it in recent CCP propaganda. The display boards at the National Palace Museum have dispelled that notion.

A family member of a Taiwan businessman told Ms. Du: “I believe that the organ harvesting is indeed happening! When I was visiting the mainland, a doctor told me that anyone could get a new liver or kidney any time. He said, 'As a matter of fact, I have over 10 kidneys ready for organ transplant right now.' I had a chill in my spine.” 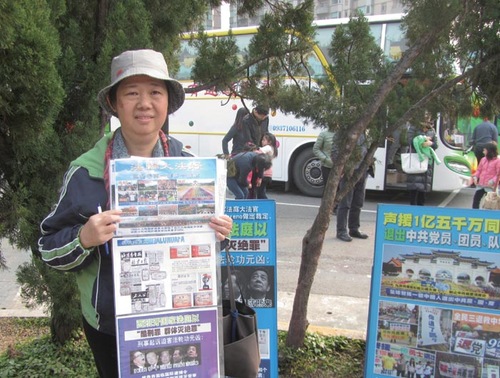 Wei Qingrong had suffered from acute myelitis before she practiced Falun Gong, and the doctor couldn't find an effective cure. Steroids that she had to take had a lot of side effects.

Her husband felt that Falun Gong (also called Falun Dafa) is a good thing, based on how the CCP launched the persecution in July 1999. They found a group exercise site and tried out the exercises. They have both been devoted practitioners ever since. Ms. Wei never had health problems again after that.

Once a group of 40 tourists listened to Ms. Wei for a long time. Each time she asked them if they would like to quit the CCP and its affiliated organizations, they smiled and shook their heads. In the end, one of them told Ms. Wei that they had all quit the CCP in their village, but didn't tell her earlier because they wanted to hear more about it.

A group of 30 tourists were hesitant to quit the CCP. A woman in the group suddenly called out, “Falun Dafa is good!” Over half of the group then decided to renounce their CCP memberships.