(Minghui.org) The annual Odense Health Expo was held at the city convention center on February 15 and 16, 2014. Falun Dafa practitioners participated in the Expo for the eighth consecutive year to introduce Falun Dafa and expose the Chinese Communist Party's (CCP) brutal persecution, including the unprecedented crime of organ harvesting from living Falun Gong practitioners. 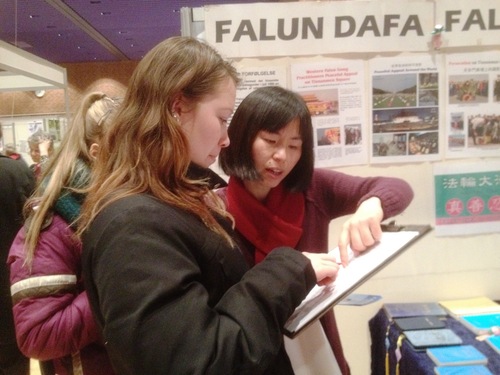 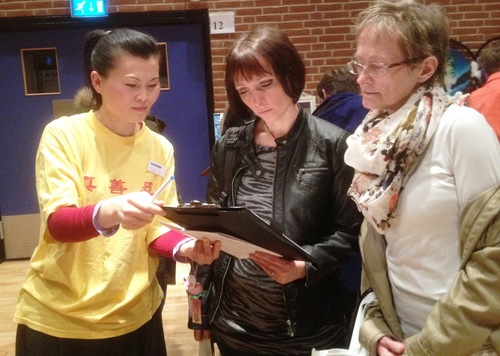 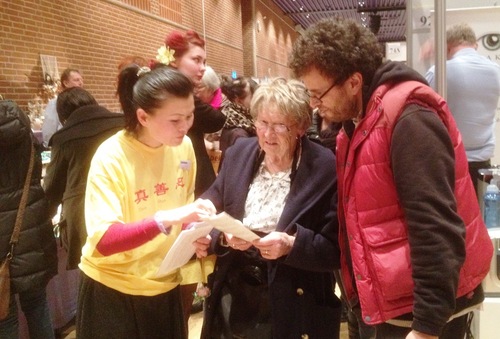 Visitors to the Falun Dafa booth at the Odense Health Expo 2014. 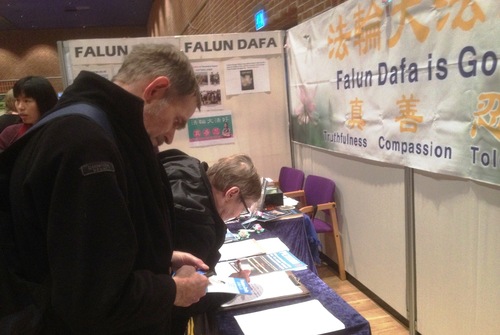 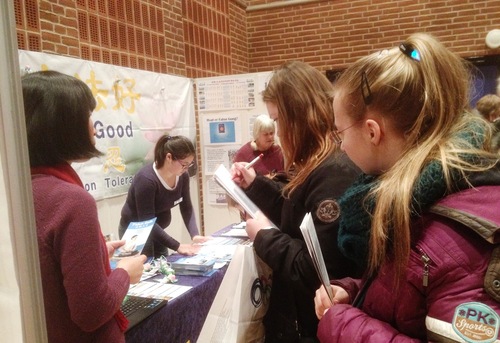 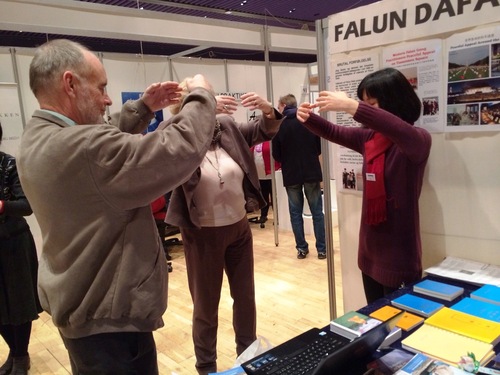 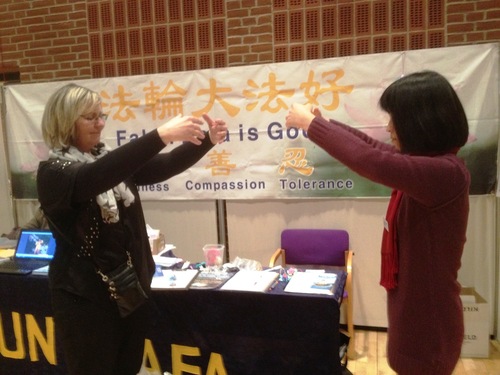 Odense is a city with over a thousand years of history and the birthplace of author Hans Christian Andersen. Thousands of visitors from many countries visit Odense each year.

Falun Dafa practitioners prepared two sets of information for the Expo visitors. One set was to introduce the practice of Falun Gong, including its principles of Truthfulness-Compassion-Forbearance and its miraculous healing effects. The other set of information was about the 14-year-long brutal persecution of Falun Gong in China, including the CCP's live organ harvesting from Dafa practitioners imprisoned under the persecution.

Eight Years of Taking Part in the Odense Health Expo

Karin Seebach, from Odense, has enjoyed eight years of introducing Falun Dafa at the city's annual health expo. On the morning of February 15, she and several other practitioners came to the convention center early to set up the booth and prepare the introductory materials. By looking at her energetic and swift movements, it's hard to believe that Karin is already 76 years old. She hung up a banner emblazoned with “Falun Dafa,” put up pictures and printed materials on the table and arranged a lot of beautiful paper lotus flowers that she had made as gifts for the expo visitors.

The expo opened at 10 a.m., with a large crowd entering the exhibition hall. The attending practitioners introduced the beauty of Falun Dafa and answered questions. They also reminded people to be aware that the persecution of Falun Gong is still going on in China.

People stopped at the booth to learn more about Falun Gong, and a number of visitors learned the Falun Gong exercises. When expo visitors heard that the CCP is murdering Falun Gong practitioners by taking their organs and selling them for profit for transplantation surgeries, most of them were angered at the atrocity and immediately signed the petition condemning such an evil practice. At times, people had to wait in line to sign the petition.

“A source of power guided me here!”

A local resident stopped at the booth and said that she knew about Qigong. When she learned about the health improvement power of Falun Gong and learned of the ongoing persecution of Falun Gong in China, she immediately signed two petition forms. One petition is from DAFOH (Doctors Against Forced Organ Harvesting) and the other is to be sent to the Danish Legislature calling for their help in ending the forced organ harvesting.

Next, the visitor wanted to learn the second Falun Gong exercise. Only a few minutes later, she said that she felt energy circulation in her body and she also felt another source of energy circling outside her body. She even felt energy moving down her body, exiting to the ground from her feet. She was very excited, “It is magical! I didn't plan to come here at first, but a source of power guided me here. I didn't know the exercise was so powerful. It's great! I must learn Falun Gong.”

She bought the Danish version of Zhuan Falun and left, very happy. A short time later, she returned with a friend. She asked the practitioners to tell her friend everything about Falun Gong. Then her friend signed the petition and they made an appointment with Karin to teach them the exercises.

“I want to be young and happy like you”

A retired Israeli businessman came to the Falun Dafa booth. Karin told him that she had practiced Falun Gong for 18 years and since then she hasn't had to take any medicine at all. Looking at Karin's white hair and bright smile, the gentleman said that he wanted to learn Falun Gong too. “I want to be young, happy and kind like you,” he said.

“You are doing a meaningful thing”

A woman and her child came to the booth and asked, “You say that the exercises are taught for free and all the materials can be downloaded from the Internet for free. But you have to pay the rental for the booth and you spend time and energy here. What is it that you are selling?” A practitioner explained to her, “If there were no persecution of Falun Gong in China we actually wouldn't need to come here. We are here to tell people about what is happening to Falun Gong practitioners in China and we want to expose the Chinese Communist Party's lies and defamation of Falun Gong. Our purpose is to let everyone make an informed decision, based on their own conscience.”

The practitioner then told the woman that Falun Gong has been embraced in over one hundred countries and has helped millions of people regain their health and raise their moral standard. But only in China is Falun Gong persecuted and thousands of practitioners have been jailed, beaten and tortured and they have even had their organs forcibly taken. The woman quickly understood and carefully signed her name on the petitions. She said, “You are doing a meaningful thing. I hope that the persecution ends soon and the world can have peace.”