(Minghui.org) Today's news from China includes persecution that took place in 11 cities or counties in 6 provinces. According to this report, 5 practitioners were subjected to mistreatment during detention, and at least 12 practitioners were illegally arrested . 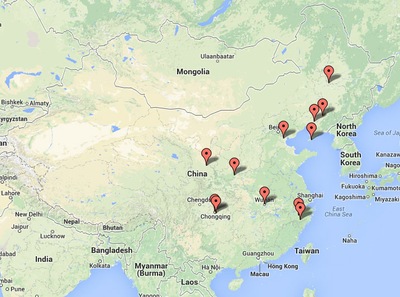 The Wafangdian Court sentenced Ms. Yin Hongmei to four years in prison on December 6, 2013. She is being held at the Yaojia Detention Center.

Mr. Li Changyu, 60s, from Tongliang County, Chongqing, was arrested when he spoke to people about Falun Gong on January 10, 2014. He was transferred elsewhere after being held for 15 days. His whereabouts is unknown.

The Jianghan District Court of Wuhan sentenced Mr. Cui Hai to five years of imprisonment. He is still held at the Ankang Hospital of the Wuhan Police Department. He is in critical condition. He was forced-fed and the guards added poison into his meal when he was held at the Hubei Provincial Brainwashing Center. He was severely tortured and vomited.

Mr. Chen Ke was arrested on January 21, 2014. He is being held in Daan Detention Center.

Mr. Gao Han, a teacher at Guangming High School, was arrested in January 2014.

Ms. Yang Li was sentenced to three years of imprisonment by the Beipei District Court. She is being held in the Zhouma Women's Prison in Chongqing.

Mr. Lin Zhengzheng and Mr. Hou Huaning were reported to the Pucheng County government by the Party secretary of the local township government when they were distributing Falun Gong materials on January 25, 2014. They were arrested by the county police. Their homes were ransacked the next day. The two practitioners are being held at the Pucheng County Detention Center in Weinan.

Mr. Sheng Zhongliang was arrested by officers from the Jinhua 610 Office and the Jiangnan Police Department on January 24, 2014.

Ms. Yin Xinmei from Pucheng County, Fujian Province, was arrested for talking to people about Falun Gong on January 25, 2014. Her whereabouts is unknown.

Mr. Liu Haixue, 50s, from Baicaoyuan Township, Huining County, was arrested at home by officers from the Huining Domestics Security Division and the Baicaoyuan Police Station on January 27, 2014. The police ransacked his home and confiscated his computer and printer.

“Cultivating Falun Dafa Enabled Me to Escape from a Tragedy”

“Mr. Zhang Hongwei Taken Away by 610 Office as He Is Released from 13-Year Prison Term (Photo)”