Law Abiding Businessman and Philanthropist Arrested for the Fourth Time

(Minghui.org) Mr. Yu Ming, a 42-year-old successful businessman from Shenyang City, Liaoning Province, was unlawfully arrested again on September 24, 2013 simply because he practices Falun Gong. He is currently being held at the Shenyang Detention Center.

When Mr. Yu was illegally arrested, he had several bank cards and several thousand yuan with him. The policemen seized the bank cards and cash and refused to return them to his family. However, they returned his clothes, torn and blood-stained, after his arrest.

Mr. Yu’s family members are trying desperately to find out his condition. With their legal visitation rights denied by the police, they feel helpless and don't know where to turn for help. A Beijing lawyer, hired by his family to represent Mr. Yu, was denied visitation rights on six occasions at the detention center.

Mr. Yu’s family learned that he was confined in an iron cage with heavy shackles and tight handcuffs. His basic, daily needs of food, water, bathroom needs, etc., have been denied. He has also been subjected to torture, including having bamboo spikes driven under his fingernails. 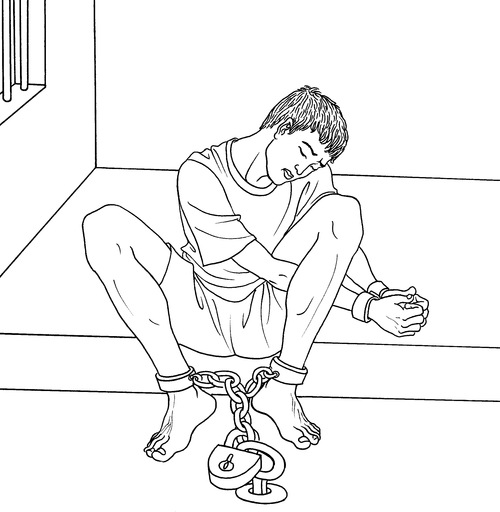 Mr. Yu owns a medium-sized clothing manufacturing firm of over 100 employees. As a Falun Gong practitioner, he follows the principles of Truthfulness, Compassion and Forbearance in his daily life and business transactions. He helped his stepmother establish a homeless shelter for the elderly, children and people with disabilities. His generosity was well received and praised by the local community.

The following is an eyewitness account of Mr. Yu's arrest on August 29, 2013.

The policemen then tightly cuffed Mr. Yu’s hands behind his back. The arrest occurred during the night while Mr. Yu was in bed. The police refused Mr. Yu’s plea to put on a coat, pants and shoes and forced him into the police car in his underwear. They then confiscated his car.

Throughout the whole ordeal, Mr. Yu’s sister-in-law and their neighbors requested repeatedly to see the policemen’s IDs. The policemen ignored their requests and threatened them with arrest.

One of Mr. Yu’s relatives is a one-year-old baby boy. As the policemen’s brutality unfolded in front of his eyes, he was terrified and cried continuously. Traumatized by the event, the child has been experiencing nightmares for more than a month.

Mr. Yu’s other relatives have also been traumatized by the arrest. His brother-in-law was physically injured from the policemen's brutal assault and he never fully regained his eyesight after being sprayed by the police. He is currently unable to do any kind of physical work. The family’s livestock – their only source of income – have been left unattended and unfed.

Mr. Yu was able to escape from the police on August 30. Every day after that, the police harassed his eighty-year-old mother, in order to find out his whereabouts. Because of their unrelenting harassment, her health deteriorated and she was sent to the hospital.

Mr. Yu was again taken away by the police on September 24, 2013. His older brother and sister held back the bad news in order to safeguard their mother's health.

At the time of Mr. Yu's first arrest in August, his wife and daughter were visiting the U.S. Out of fear that they might be arrested by the police upon their return, they decided to stay in the U.S. With little money and no family, they are in a difficult situation. Mr. Yu’s daughter, who is 14, has been unable to continue her schooling during this crisis.

Since the Chinese communist government launched the illegal persecution of Falun Gong in July 1999, Mr. Yu Ming has been unlawfully detained three times for his belief. He was brutally tortured at the Beijing Forced Labor Camp, Tuanhe Forced Labor Camp and Masanjia Forced Labor Camp.

People who are directly involved in Mr. Yu's case:

“My Journey of Talking about Falun Gong”