(Minghui.org) Falun Dafa practitioners in Brasilia, the capital of Brazil, went to the Presidential Palace, the Senate, and the Chamber of Deputies February 3-5, 2014, to raise awareness about the persecution and forced organ harvesting in China.

Practitioners went to the government offices before the employees arrived at work at 7:30 a.m. to be ready to distribute Falun Dafa flyers.

Many of the employees were reading the flyers as they walked in to the building. Some of them raised their thumbs and said, “Falun Dafa is good,” “You are doing the right thing.” 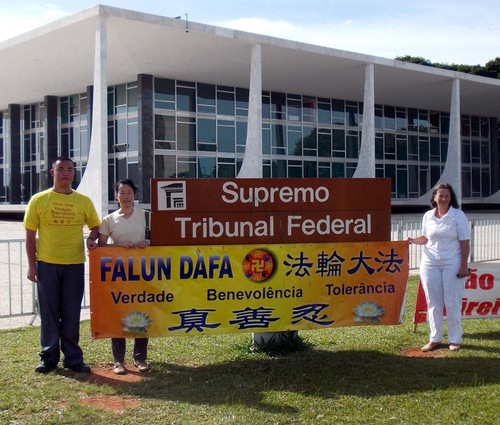 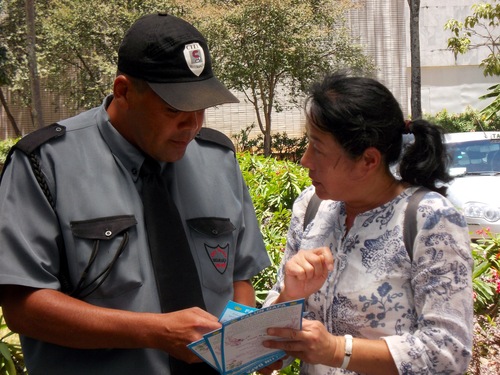 A practitioner tells a court officer about the persecution taking place in China.

Over the lunch hour on February 3, practitioners handed out informational flyers about Falun Dafa and the persecution to employees from the Ministry of Justice as they were leaving the building.

Prosecutors, judges, and clerks carefully read the flyers and were in disbelief after understanding the extent of the brutality in the persecution of Falun Dafa. Some of them wanted to learn more about it.

One of them said that people nowadays should pay more attention to “Truthfulness-Compassion-Forbearance” so that morality would improve.

A security officer at the Ministry of Science and Technology learned about how practitioners in China were killed for their belief. He was shocked and said that he would pray for the evildoers to be punished. He said that having faith in gods was the right thing to do and should not be suppressed.

On February 4 after giving out flyers in front of the government buildings, the practitioners did the five exercises together at the Three Powers Square, which is surrounded by the Presidential Palace, the National Congress, and the Supreme Federal Court.

On February 5, the practitioners handed out flyers at the Presidential Palace to officials and soldiers of the Cabinet of Institutional Security.

One of the officials pointed at a photo and asked about organ harvesting from living people. After a practitioner told him the facts about forced organ harvesting, the official said, “This is unbelievable! How did this happen? The Chinese government said that Falun Dafa has political intentions?” The practitioner told him about the Chinese regime's propaganda and lies and explained to him about Falun Dafa and why the Chinese regime persecutes this peaceful practice.

After understanding the truth, the official asked, “Do all of you practice Falun Dafa? Is this your first time at the Presidential Palace? We are all good people here. I can help you take a picture here if you wish.” He helped take several photos and wished every practitioner the best before they left.

The practitioners also went to the National Senate and the Chamber of Deputies. Many representatives read the flyers, and some raised their thumbs to encourage the practitioners.

One stopped to listen to practitioners explaining about Falun Dafa and the persecution and said, “I like Truthfulness-Compassion-Forbearance. I will get online to learn more about Falun Dafa. When can I learn the exercises?”

After listening to a practitioner tell them about the persecution and forced organ harvesting, two representatives seemed shocked and did not respond for a while. After the practitioner asked them to advocate to their constituents not to go to China for organ transplants, they reassured the practitioner that they would research the issue and make official responses.