(Minghui.org) Today's news from China includes incidents of persecution that took place in 3 cities or counties in 2 provinces. According to this report, 4 practitioners were subjected to mistreatment during their detention, and at least 1 practitioners were illegally arrested. 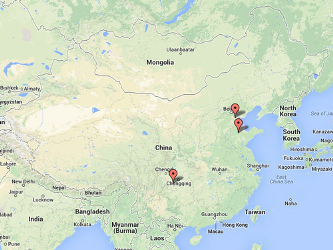 1. [Tianjin] Ms. Wu Yingchun Passed Away After Years of Persecution

Ms. Wu Yingchun, 64, from Hebei District was arrested by police and sentenced to 4 years in prison in 2001 for talking to people about the persecution of Falun Gong.

As a result of being abused in the prison, she was in critical condition upon being released in July 2004. She could not eat, and her whole body was swollen. Later she was diagnosed with advanced-stage kidney failure and had to rely on dialysis to sustain her life.

Ms. Wang Zexuan, Ms. Wang Daigui, and Ms. Zhou Bangqin were tried on January 10, 2014. They are still being detained.

Two practitioners were arrested in late November 2013 by officers from the Zouping Police Department. Police ransacked their homes and confiscated two printers and approximately 1,000 calendars with information about Falun Gong. They also arrested a practitioner's husband and detained him for a day.

Ms. Qu Benhui was later arrested as well. She is still held at the Zouping Detention Center.

Officers from the police department also harassed several other practitioners, who were forced to leave their homes to avoid arrest.