(Minghui.org) Nine Commentaries on the Communist Party has brought about a better future for China, experts say. On the 10th anniversary of the publishing of the book, experts and politicians commended the change it has initiated through inspiring the grassroots movement of over 185 million Chinese people renouncing their Party organization memberships. 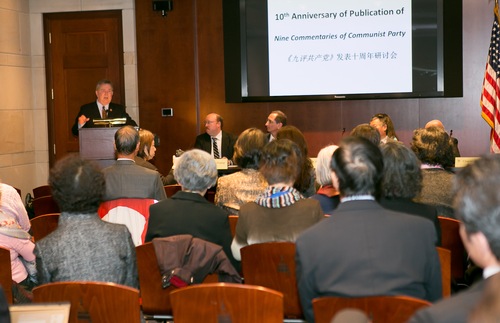 “We must be most grateful to the authors of the Nine Commentaries on the Communist Party, which assembled in history and in reporting the horrible truth of the Party, and therefore provided a real reason for Chinese to consider that they deserve so much better,” said Richard Fisher, senior fellow on Asian Military Affairs with the International Assessment and Strategy Center.

Mr. Fisher commented on the phenomenon of so many quitting the Chinese Communist Party (CCP), “Only when the Chinese people themselves understand that they deserve so much better, will they begin to work to achieve such a new era.” 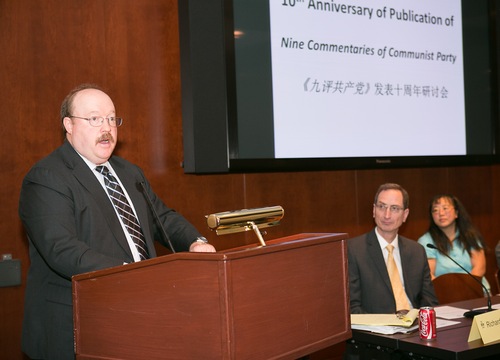 Congressman Steve Stockman, who is on the House Foreign Affairs Committee, stopped by the December 3 forum held at a congressional meeting room in the U.S. Capitol building.

He encouraged attendees of the forum, including volunteers who help Chinese quit the CCP, “I toured around these hospitals [in China], and they were in these really small rooms. They called it the transplant hospital. And I said, 'Are you doing organ transplants?' They said, 'No. No. This is just fetal tissue transplants... I don't know if that was true. But I do know one thing was true. If you are silent, more people will be harmed. More people will be locked up. Silence is not an option.” 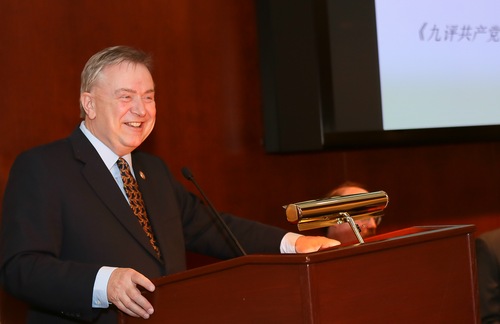 Yu Songping, a Maryland resident who volunteers to introduce the Nine Commentaries to Chinese tourists on the National Mall each week, recalled that when he came to the U.S. 22 years ago and had access to independent information about “true happenings in contemporary China:”

“I was shocked by what I had found. What I learned in school in China was totally wrong! I was angry for being brainwashed by the CCP for so many years. I was very sad and felt helpless that we Chinese people, under the control of the regime, had been deceived by its propaganda.”

“After I read the Nine Commentaries, I thought, 'There should be something I should do, and something I can do.' It's the book that can awaken Chinese people from the CCP's deception. If more people read the book, more will know the truth and will bring hope to China.” Mr. Yu has been such a change agent for years.

Speakers shared the insight that the CCP was not the same as China, and that the Nine Commentaries enables the separation and revival of traditional Chinese culture.

John Nania, editor-in-chief of English-language editions of Epoch Times, said, “The Nine Commentaries shows the path to separating the Party from the country. The path is to revive the traditional values of Chinese culture, such as those taught by Falun Gong: truthfulness, compassion, and tolerance.”

“Despite the violence, torture, and genocidal force applied by Jiang Zemin and the CCP, Falun Gong practitioners have endured peacefully for more than 15 years. They serve as a beacon for Chinese people, and indeed they even serve the people by showing them the nobility and indestructibility of traditional values.”

Wei Jingsheng, chair of Weijingsheng Foundation and a renowned human rights activist, credited the Nine Commentaries and the movement of Chinese renouncing their Communist Party memberships as a movement that rebuilds morality in China's society.

He said that most Chinese aren't happy because the society lacks morality. However, the Nine Commentaries has inspired people's conscience, hidden as a result of the Communist regime's violent political campaigns. The CCP destroyed Chinese traditional culture but didn't succeed in replacing it with communist culture. In this way, the book has helped Chinese people attain spiritual freedom and sets the foundation for China's future.