(Minghui.org) Today's news from China includes persecution that took place in 11 cities or counties in 6 provinces. According to this report, 4 practitioners were subjected to mistreatment during detention, at least 14 practitioners were illegally arrested. 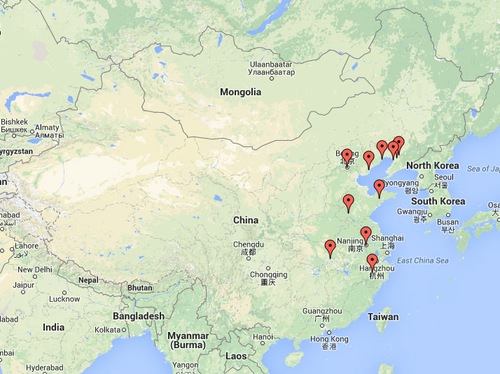 The two practitioners were arrested on the afternoon of January 24, 2014, for distributing calendars with information about Falun Gong.

Ms. Xu Binhai, in her 70s, was arrested in April 2014. She has been sentenced to prison for a term of 3.5 years and is being held in the Ji'nan Women's Prison.

Ms. Yang Xuehua went to a construction materials mall in Yuquanying and distributed informational materials about Falun Gong on November 19, 2014. She was arrested and is being held in Lugouqiao Detention Center in the Fengtai District.

Ms. Wang Shuhua, Ms. Liu Yulian, and Mr. Sun Wenhua's wife from Qugezhuang Village, Xiagezhuang Town, Laixi, were arrested by officers from the Xigezhuang Police Station on November 21, 2014. Their homes were ransacked. The three practitioners were taken to a detention center.

Ms. Chen Huazhen from the Qiaokou District was arrested at home on November 19, 2014. She is being held in the Etouwan Brainwashing Center.

Mr. Hu Zhixin and his wife, Ms. Li Huifang, were arrested on November 12, 2014. They were taken to the Yingkou Detention Center.

Ms. Shi Huanqin and Ms. Guo Fengqin from Shanggezhuang Village, Matuodian Township, Changli, went to Huangdianzhuang Township to post informational materials about Falun Gong on November 21, 2014. Ms. Guo was released after having 1000 yuan extorted from her. The police ordered Ms. Shi to go to the Changli Domestic Security Division.

Xiao Ningjiang and other police officers went to ransack Ms. Li Weiping's home on the morning of November 19, 2014. Ms. Li was taken away and released that afternoon.

Ms. Zhang Jiachun from Tashan Village, Ganwang Town, Haicheng, was arrested at a store by officers from the Anshan Domestic Security Division at noon on November 13, 2014. Her daughter and her brother Mr. Zhang Jiaan were also arrested. Ms. Zhang's daughter was released that night. Ms. Zhang is being held at the Anshan Women's Detention Center and her brother is in the Nantai Detention Center.

Mr. Zhang Yukun was sentenced to four years in prison.