(Minghui.org) As an authorized representative for her Canadian citizen parents, a Canadian vice-consul in charge of legal affairs was denied observation of the court trial of Ms. Chen Yinghua (陈英华). During the court session on December 12, 2014, Ms. Chen was also denied the two lawyers that she had hired for her defense. The session adjourned without a verdict.

Ms. Chen's mother Huang Jinling (黄金玲) learned of the trial through a phone call with Canadian diplomats the day of the trial.

The court's political department head Zhang Dawei (张大伟) took over the receiver in the middle of the call; he said that the courtroom had only 10 seats for observers and was too full to accommodate the vice-consul.

This trial is a follow-up to the August 21 session, for which the representatives from the Canadian Embassy were also denied an observation. They had to wait outside of the courthouse until the end of the trial.

This time, the vice-consul was led to a small room and monitored throughout the trial, presumably so that his presence would be unknown to passersby. 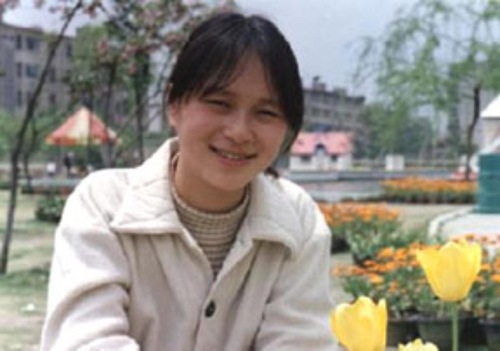 Both women were arrested days after taking a picture outside of the Shijiazhuang Prison, where Ms. Bian's father has been incarcerated since his illegal sentence of 12 years in July 2012.

Ms. Bian, 23, held up a banner that read “I want to see my father” on March 4, 2014, after exhausting all other channels to rescue her father. Ms. Chen took a picture for her to be posted online. Both were subsequently arrested on the 12th. 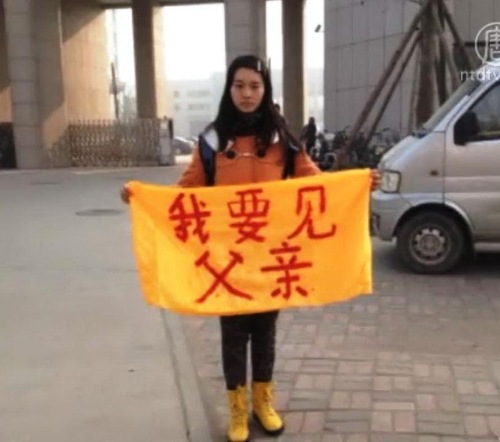 The picture Ms. Chen took for Ms. Bian outside of the Shijiazhuang Prison on March 4, 2014: This has led to arrest and trials under the charge of “sabotaging law enforcement.” The banner reads “I want to see my father.”

Ms. Chen has been on a hunger strike at the Shijiazhuang No. 2 Detention Center. She appeared weak during the December 12 trial, and spoke very softly. She also vomited during the afternoon segment.

The court showed seven video clips during the trial: three clips of “I want to see my father” taken outside of the Shijiazhuang Prison, three clips of what happened to Mr. Bian's family members when they tried to visit him in prison, and one clip of the father Bian Lichao (卞丽潮), produced by local authorities.

In the last clip, Mr. Bian seemed to be speaking under duress.

Ms. Chen defended herself by saying, “I was simply accompanying Ms. Bian, a 23-year-old woman, to seek her father's release. The picture was taken as a record of her rescue efforts.”

Ms. Bian's family members were all denied entrance to the courthouse.

During an intermission, the presiding judge Wang Xu (王旭) walked out of the building and asked them, “Why are you still waiting here? Observation of this trial is absolutely not allowed!”

“No, no. The real reason was that there were no seats left,” he said, after realizing his mistake.

The three lawyers issued their statement through Mr. Jiang, the replacement lawyer for Ms. Bian, stating that they “have never given up legal representation for the two defendants.”

Ms. Chen is on a rescue list that Canadian Prime Minister Stephen Harper gave to the Chinese government during his recent trip to China.