The annual experience sharing conference was held on December 21, 2014, in Singapore. Nineteen practitioners shared their experiences in obtaining the Fa, cultivating their xinxing, and spreading the goodness of Falun Gong and raising awareness of the brutality the practice suffers at the hands of the Chinese Communist Party. 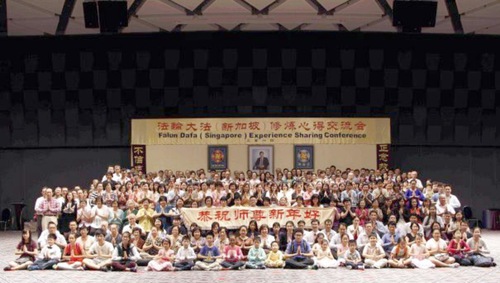 Practitioners have a group photo taken after the Fa conference to respectfully wish revered Master Li a Happy New Year. 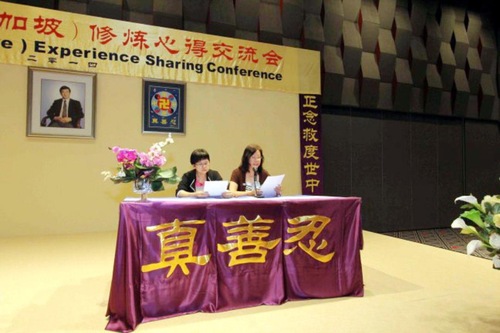 “Tears kept running down my face when I was sitting there in the conference venue,” said one practitioner. “It was just the experience of listening to practitioners share their cultivation experience one after another – it was great. The Fa conference gives me an impression of solemnity and magnificence. It is truly a grand occasion for Dafa disciples.”

Taxi driver Mr. Bai grew up in an impoverished family. In his fifty years before obtaining the Fa, he was so destitute that he turned to gambling as a potential way to escape poverty.

Mr. Bai was eventually unable to extricate himself from his habit and became a compulsive gambler. He was unable to pay his mortgage and had to sell his flat twice. To avoid his creditors, he's moved eleven times.

Thoughts of suicide crossed his mind on several occasions, but Mr. Bai was fortunate enough to come across a young Malaysian in 2004. The young man sympathized with Mr. Bai and gave him a copy of Zhuan Falun to read.

Mr. Bai didn't read the book immediately, and kept the book at home. After going through ups and downs for eight more years, however, Mr. Bai opened the book and truly began his cultivation practice in 2012.

“When I read Zhuan Falun repeatedly during those days of misery, I could see a glimmer of hope in the darkness.” Mr. Bai said, “I had a bounce in my step, and I could drive my taxi for many hours without getting tired at all. Everyday before going to sleep, my Celestial Eye would open and show me wonderful views from other dimensions. I was excited by these unprecedented experiences.”

"I cannot use words to describe Master's compassion and everything I obtained through studying Zhuan Falun. I've been tremendously transformed by the incredible power of Dafa – my ex-wife, children and even my son-in-law are my best witnesses. They have been sincerely convinced of the power of Falun Dafa and now respect me, unlike before,” continued Mr. Bai.

“For the past three years, Master's Zhuan Falun and other lectures have accompanied me everyday. Apart from work, eating and sleeping, I will study the Fa and do the exercises,” he added.

“Dafa enables me to perform my work well and has also given me a lot of blessings. Unexpectedly, I was able to pay off my senior apartment which cost $90,000 Singaporean dollars (about 71K USD) with my 2-year savings this October,” said Mr. Bai happily, “This was the 12th time I have moved, and it will also be the last time. There is no need for me to depend on others.”

Mr. Bai could not hold back his tears and wept aloud as he finished these words. He is determined to follow Master's teachings, cultivate himself well and do well the three things, both now and in the future.

Overcoming Fear and Persisting in Clarifying the Facts at Tourist Sites

Elderly practitioner Ms. Shu Hua shared how she cultivated away her fear in order to clarify the facts to Chinese tourists.

“At the front lines, in the spotlight – my biggest obstacle was fear,” she said.

She repeatedly memorized Master's Fa to strengthen her righteous thoughts and eliminate the fear.

“After I got rid of my attachment to fear, I'm not afraid even if I do come across obstacles,” said Ms. Shu Hua, “When I do, I just use my righteous thoughts to get rid of the interference and use my supernormal powers to stop the evil.”

Once, she came across a man in his sixties at the tourist site. The man cursed Master, Dafa, and Ms. Shu Hua in a frenzied and furious manner.

Ms. Shu Hua asked Master to strengthen her and stood very straight. She held one palm erect, opened her eyes wide, stared into the man's eyes, and sent forth a very powerful righteous thought: Immediately destroy all the evil that manipulates this man to do evil.

“I was fully concentrating without any fear or errant thoughts,” said Ms. Shu Hua. The man turned around and retreated right away.

It happened then that a tour group from China arrived. The man suddenly returned and attempted to provoke the Chinese tourists into taking his side.

“In this showdown between good and evil, I can only keep going and not retreat. I must validate the Fa in front of all these tourists so that they can bring the goodness of Dafa back to China,” she thought.

She then greeted the tourists with a smile, and told them about the spread of Falun Dafa around the world. She also told them that the chief perpetrators who have persecuted Falun Gong have been sued in over 30 countries.

The tourists were listening to Ms. Shu Hua intently, when the man suddenly rushed toward Ms. Shu Hua and attempted to hit her. Two tourists stepped forward and blocked the man. They then chased him away.

Ms. Shu Hua said she now realizes the meaning of the part of Master's Fa,

“... just by having your heart unaffected you will be able to handle all situations." (Eliminate Your Last Attachment(s), from Essentials for Further Advancement II.)

Finding My Way Back in This Maze

Tingting had just obtained the Fa a year ago, and she feels very fortunate to be able to enter into Dafa cultivation. Before obtaining the Fa, she had been searching for a school of thought that will guide her in life, as there were a lot of unsolved questions that puzzled her about life.

A year ago, Tingting obtained a copy of Zhuan Falun from a senior in her school.

“As soon as I got Zhuan Falun, I began reading it eagerly. This great book really answered all of my doubts and puzzles,” she said.

“After I decided to practice, I also read Master's recent writings. I gradually understood why Master saves people at this time and why the persecution happened. I felt so fortunate to walk in at this very last stage of the Fa-rectification period!”

Letting Go of My Attachment to Comfort, and Improving My Xinxing in My Work Environment

Ms. Li Ping works as a salesperson at a department store; her work involves standing for ten to twelve hours every day. On top of this, she also has to do heavy physical labor.

She realized that if she can't persist in doing the exercises and studying the Fa daily, she would have no time and energy to do Fa-validation work.

She made an effort to break through. She initially went to bed at 12:30 A.M. and got up at 3:30 A.M. everyday. After finishing two hours of exercises, she studied the Fa for two to three more hours. But she still felt sleepy and tired at work.

“…practicing cultivation is the best form of rest? You can obtain the kind of rest that can’t be obtained through sleeping.” (“Lecture at the First Conference in North America”)

She strove to make a breakthrough. Over the course of a year's genuine and solid cultivation, constantly sending righteous thoughts, and training her endurance and willpower, Ms. Li has gotten her body to reach an extraordinary state.

Now, she only sleeps for three hours everyday and eats two meals a day. Yet, she doesn't feel tired from heavy work, and no longer has much of a reaction to hunger and fatigue.

“While I was keeping up with studying the Fa and doing the exercises, my xinxing has been quietly changing,” said Ms. Li, “My patience is gradually increasing and the attachment to validating myself is shrinking. I'm gradually learning to put myself in others' shoes.”

Once, Ms. Li had a very demanding day at work. She was already tired and weak, but was assigned more physical labor. She felt she could not keep going, but to add insult to injury, her colleagues had criticized her that day for slacking off.

Ms. Li calmed down and decided that there was no choice but endure. She soon realized that the criticism she received was valid, and that she can improve in that area by working a little harder.

“At that moment, a few customers came and put forward some demands. I tried tohelp them and think of the problem from their point of view, and resolved their problems,” said Ms. Li, “They appeared very pleased and thanked me.”

“I initially tried to suppress my focusing on this uncomfortable state and shift my attention elsewhere. And in the end it paid off – others' happiness influenced me and I felt happy for other people's happiness,” she said, “I suddenly realized that my fatigue, hunger, and suffering all disappeared. I was very awake and my legs were full of energy. I also felt like I was floating while walking.”

Elevating as a Whole by Cooperating in the Epoch Times Project

Madgeline took over the role of managing the local Chinese Epoch Times newspaper last year when there was a shortage of funds.

“I encountered many conflicts among employees – either sales with editors or sales with sales. The most unpleasant situation was when everyone prefers to stick to their opinions and ideas. Nobody was willing to give in!” she said, “Handling a group of intelligent 'kings' is really no small feat; I was even on the verge of throwing in the towel.”

“The only way out is having faith in Master and the Fa,” Madgeline continued, “I gathered the sales and editing teams and made them study the Fa and share experiences with each other. Gradually, with the Fa's guidance, each of us has learned to examine himself or herself instead of searching externally.”

“Both teams are now working cohesively as one body, which really upped our productivity,” said Madgeline. “In a short period of 4 months, our sales hit a new high for Epoch Times Singapore.”

Tingting, who attended the Fa conference for the first time, said, “I'm exceptionally happy, and I'll remember today as one of the most important days of my life. I was impressed by other practitioners' stories, and I also saw how far I was falling short compared to fellow practitioners.”

A Vietnamese practitioner said that he was particularly impressed by a practitioner who works as a salesperson for the Epoch Times newspaper. The practitioner was able to improve her skills in sales in a very short period of time. Because of her story, he was also motivated to further his skills in Fa-validation projects that he was a part of.

Ms. Shu Hua, who had shared her experience, said, “I feel like I still haven't done enough – many sentient beings are waiting to be awakened! After I read Master's latest Fa teaching in San Francisco, I feel that I'm still far from meeting Master's requirements. I will try my best to make the most of this time in the last phase of Fa-rectification, and not leave behind any regrets.”

“My Understandings of a Recent Minghui Notice”