(Minghui.org) Ladakh is situated in the Himalayas in northern India. The awesome natural landscape is tranquil and invigorating. The ravages of tourism are apparent, but what is heartening is that the local people are pure-minded, and in many regions they still practice their ancient culture and rituals.

A Falun Dafa practitioner from Northern India has visited Ladakh every summer for the past 23 years. For the past several years she has brought materials to introduce Falun Dafa in schools and to the public.

Her journey involves hard work and expense, which includes packing and sending over 100 kg (about 220 pounds) by cargo, the rising costs in Ladakh, and carrying heavy loads to schools and elsewhere. The only means of transport are local buses and taxis, not cycle-or auto-rickshaws as in most other parts of India.

When considering whether or not to return there this year, she remembered what a practitioner said during the New York Fa Conference this year: “It is better to suffer hardships now than to have regrets later on.” 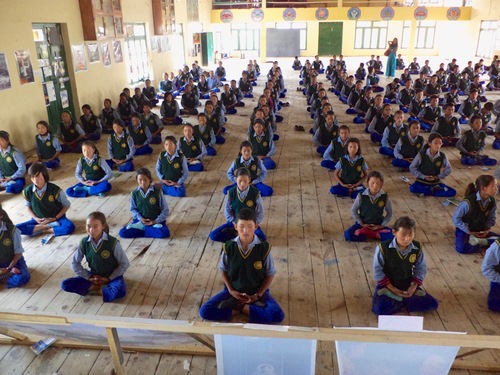 She visited 15 schools in Ladakh. A few for the first time, and others for the second, third or fourth time. Children were shown the Falun Dafa exercises, and they quickly learned all five of them. They also learned about the persecution in China, watched short films on an iPad, and looked at the display of posters and banners, often singing "Falun Dafa Hao" (Falun Dafa Is Good).

Most of these children were eager to learn and very enthusiastic, and many teachers also participated. Welcoming the practitioner to back their schools, the children called out “Falun Dafa” or started to sing “ Falun Dafa Hao.” One could truly sense a difference in schools where Falun Dafa had been introduced in the past. Many children remembered details of the exercises, about the persecution, and especially the song “Falun Dafa Hao.” 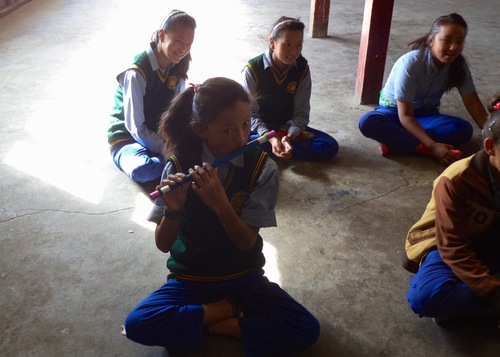 In one school where Falun Dafa was introduced for the fourth time, every child seemed to know the song "Falun Dafa Hao," and one girl played the melody on her flute.

While watching films on the persecution of practitioners such as "China – July 20, 1999,” children and teachers had tears in their eyes, and they showed deep concern and sympathy. Looking at the posters that had to do with the persecution, they often asked, "Is this really true?" and "Is this still happening today?"

This year, the children were delighted to see many new posters, which were put up in every school. Short films about the Divine Land Marching Band captivated the children, and you could see the joy on their faces.

Some of the children expressed in very moving words how much they appreciated Falun Dafa. One boy said that his stomach pain disappeared after doing the fifth exercise. 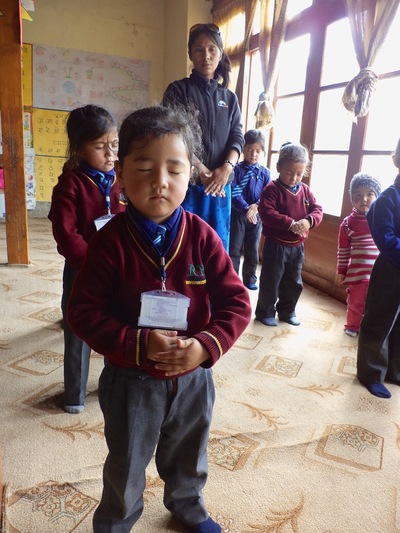 For the first time, the five Falun Dafa exercises were taught in a teachers' training institute. The teachers were as enthusiastic as the children and invited the practitioner to come again. They said that they wanted to continue practicing the exercises.

Most of the teachers signed the DAFOH (Doctors Against Forced Organ Harvesting) petition. 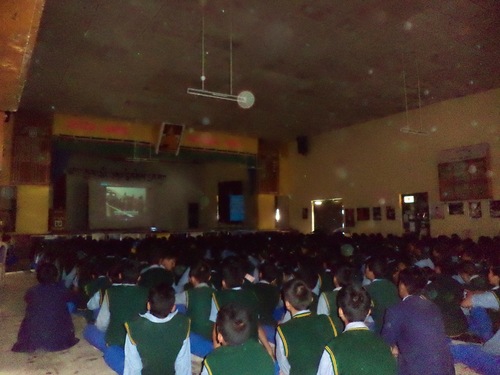 For the very first time in Ladakh the movie "Free China" was shown in a school to the students in grades 6 and up.

A teacher said that there was a song competition in her school, where the children had to sing songs from A-Z alphabetically. When it came to F, a child sang "Falun Dafa Hao."

This year a display was held in the main bazaar. Though this street was under construction, many people came to see. 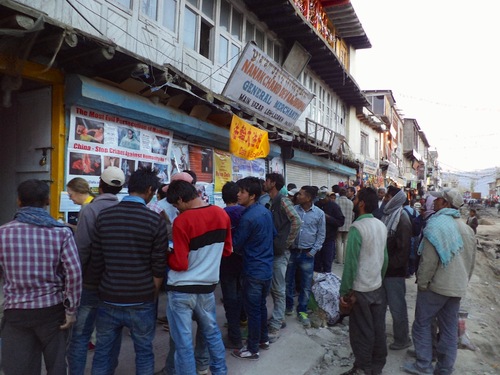 The 2012 Shen Yun Orchestra DVDs were distributed for the very first time in Ladakh. A school principal watched it right away and appeared very moved by it. He said he would definitely show it to his students. (Orchestras are totally unknown in Ladakh, and most people have never heard or seen an orchestra.)

At an event, a police officer on duty shook the practitioner's hand and said, "Falun Dafa is good," and then added emphatically "Falun Dafa is very good!"

Falun Dafa posters put up years ago can still be seen in many places in Ladakh. Some new ones and Shen Yun 2014 calendars were put up this time. Origami lotus flowers were happily accepted and treasured, as well as a variety of flyers and informational materials.

The practitioner also visited and distributed informational materials to government offices, hospitals and clinics, libraries, and the judges and lawyers of the only court.

As usual, the locals were helpful, informing other officials, friends, family members, schools, etc., and passing on informational materials.

At the end of her Ladakh visit, the practitioner realized that, in spite of all the hardships and the heavy loads to be carried to all the schools and many other places, "it is better to suffer hardships now than to have regrets later on." 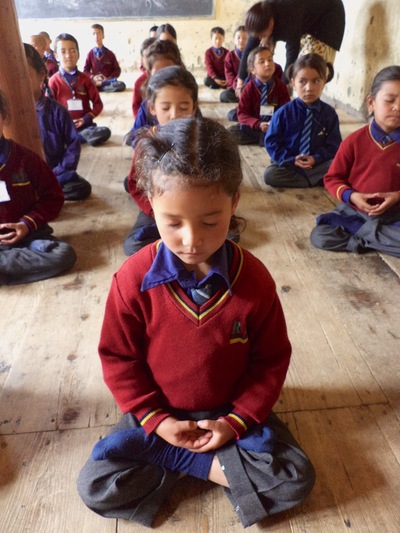