(Minghui.org) An October 4 rally in downtown Sydney to support the 179 million Chinese people who have quit the Chinese communist organizations drew broad support from elected officials, other organizations, and the public. One of the speakers at the rally, Parramatta City Councilor Andrew Wilson exposed defamatory emails he has received, which aimed to slander Falun Gong.

Nigan Gotsang, President of the Australian Tibetan Community Association, and former Chinese diplomat Chen Yonglin also made appearances to show their support for those courageous Chinese people who have dissociated themselves from the Chinese Communist Party (CCP).

Mr. Wilson printed out the three emails he received, and brought them to the rally. Similar emails have been received by local City Councilors and State Members of Parliament in New South Wales, Australia.

The Falun Dafa Association of Australia has written to local elected officials, alerting them to the slanderous email campaign and asking for their assistance in identifying and exposing the perpetrators.

Mr. Wilson said at the rally, “When you look at what our friends in Hong Kong, a former British territory, are having to do today, then it makes you think that the least we can do while we are in a great country like Australia, is stop and listen for a moment and support our Chinese friends. It is clear who is on the right side of history and the wrong side of history. It is quite clear that people who repress other people are going to suffer judgment. We all believe there is a God or eternal life of some description and I think these people are going to have a lot of answering to do.”

He described the malicious emails in detail:

“I received an email from a man calling himself 'William Long.' He basically said that the 28 Australians who died in the Malaysian flight MH17 deserved everything they got and that human beings are terrible. He was saying he was from Falun Dafa, and that was wrong.

“Falun Dafa has compassion as one of the key tenants of the faith. What a terrible a thing for somebody to say at the same time as claiming to be compassionate. Only a person with a very sick mind or trained in communist theory could ever possibly think that.

“What sort of civilisation do we want? A country run by people who will use tragedy for their own evil political gain, or are we a country that supports democracy in our friends? I’m here today, not because I practice Falun Dafa, but because I think all people of good heart should always try and make the world a better place [rather] than an evil place.” 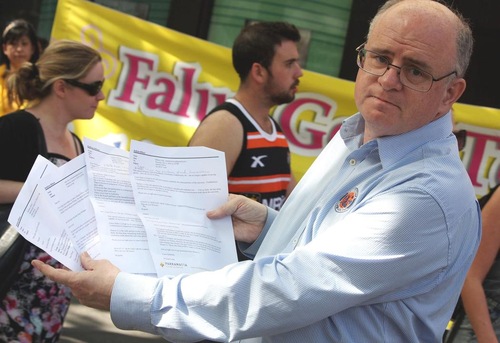 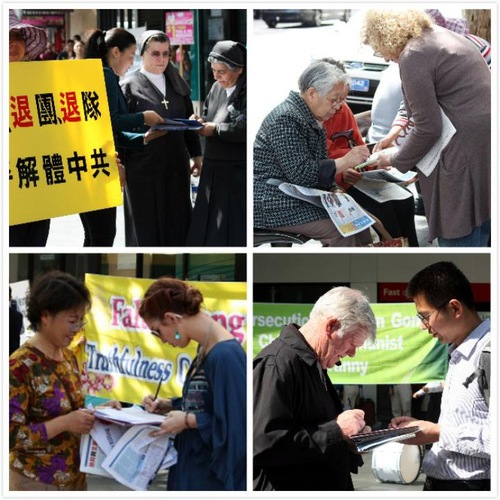 Many passersby signed the petition to call for an end to the state-sanctioned forced organ harvesting of Falun Gong practitioners in China.

Rebecca, a legal professional, was shocked that the communist party killed Falun Gong practitioners, and other prisoners of conscience, for their organs.

“Oh no, this is horrible. How can something like this happen?” she asked.

Rebecca's boyfriend is awaiting a kidney transplant. She would like to donate a kidney to him, but has had to undergo a long, extensive process to evaluate whether her kidney would be suitable.

“For these practitioners in China, it seems that people can pay money and shop for live organs,” she said.

Rebecca said she would tell her boyfriend not to go to China for transplant surgery, as long as Falun Gong practitioners are being killed on demand. She plans to tell her friends about the organ harvesting from prisoners of conscience, so that they can also sign the petition calling for an end to this crime. 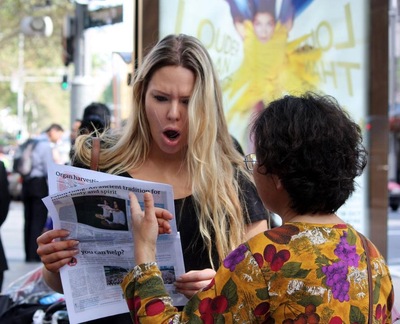 Rebecca, a legal professional, was shocked to learn that Falun Gong practitioners, and other prisoners of conscience are killed for their organs in China. 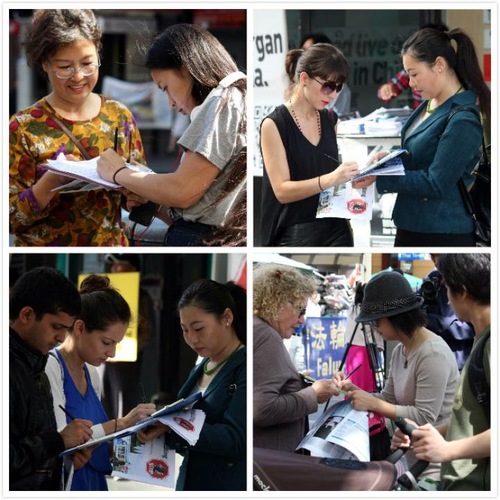 People learned about the persecution of Falun Gong and signed a petition to support practitioners in China.

“The CCP's Disintegration Is Certain”

“The end of the CCP's red dynasty is coming near, as its reign enters its 65th year. The CCP is stretched to its limit at it copes with protests and rallies in different areas in China. Hong Kong citizens have opened a new chapter of civil disobedience in the recent month,” Mr. Li said.

“Conscience is on the rise around the world. Justice is observed. All of this has formed an undeniable global current against the CCP. The CCP's disintegration is certain. The end of the persecution and bringing the main perpetrators to justice have become foreseeable in the near future.”

Mr. Li said that everyone is facing a choice at this critical juncture of the history: “to uphold righteousness or to sink with the notorious CCP.” He called on more people to see through the CCP's tactics and quit the regime for a better future.

Nigan Gotsang, President of the Australian Tibetan Community Association, congratulated the 179 million people who had publicly quit the CCP and its affiliated organizations, “From this number, we can tell that communism did not work, and will not work in China. We should stand with them and support them, for their courageous action.”

Former Chinese diplomat Chen Yonglin suggested that people who remain unclear about the methods the CCP uses to control and persecute its citizens should read Nine Commentaries on the Communist Party. Mr. Chen said that the Nine Commentaries accurately describes the vicious nature of the Party. “Deceit with lies and threats with violence are the two most common ways the CCP has been exploiting and suppressing its people,” he said.

Chinese Support an End to the CCP

Peter, a Chinese man who immigrated to Australia many years ago, sympathized with Falun Gong because of his own experience with the CCP.

“It [the CCP] may do this today and do that tomorrow—but its vicious nature remains unchanged.” Peter said that every day he hopes for the disintegration of the CCP.

“I support you wholeheartedly,” he said, referring to Falun Gong practitioners. “I have been to your activities many times and sometimes joined the parades.”

Peter readily quit the CCP's Young Pioneers, the only communist organization he has ever joined.

“I am not a [Falun Gong] practitioner yet, but please pass my greetings and respect to the founder of Falun Gong, Mr Li.” Peter plans to read Falun Gong books, and said he might become a practitioner one day.

Mr. Yuan from China recommended reading independent reports from English-language websites about the CCP. “That helped me to become clear-minded,” he said. “Although I traveled often outside of China, I still felt that I was a part of CCP's territory. I still sensed the control. Now, after I denounced my CCP membership, I am experiencing liberty and relief like none before.”

“Viewers in Thailand Learn about Falun Gong through the Art of Zhen, Shan, Ren International Exhibition”