Seventeen practitioners shared their cultivation experiences during the conference.

A practitioner from Athens shared that it's not important if a person is capable or famous. What matters is that when he wants to handle something in a project, if he tries to empty his mind to set himself free of pursuing fame or of a show-off mentality, his xinxing will improve. He will then find that everything has been arranged well by Master. He will then only need to go ahead to do it, and he will be able to do it well.

A new practitioner said he realized that all attachments stem from selfishness. This selfish ego is not our true self, and it drags us like a heavy object that prevents us from elevating. He understood that selfishness was the origin of many other attachments, such as seeking comfort and being affected by emotions.

Several other practitioners also echoed this new practitioner's enlightenment, that is that selfishness is the root of all attachments. They shared their understandings about how they managed to eliminate selfishness and improve their xinxing. 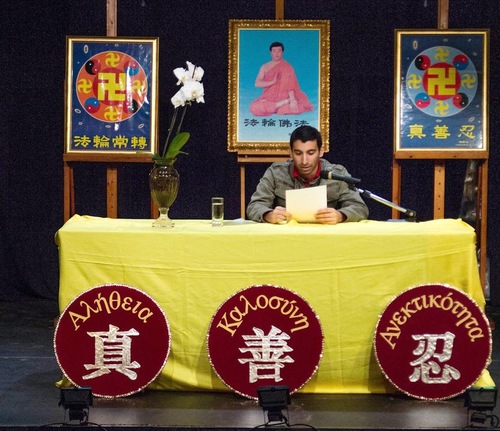 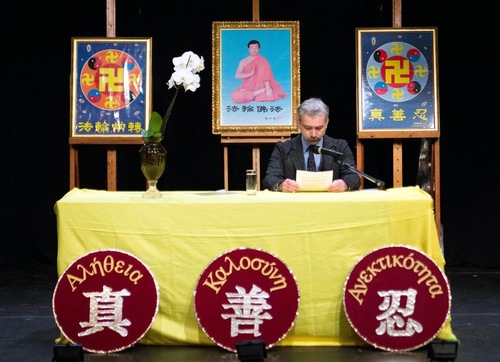 A young man who began practicing in 2004 shared the changes he had observed in practitioners' cultivation as a whole over the past 10 years, and how the environment had improved.

When he first started practicing, talking to people about Falun Gong and the persecution in China was difficult, he said. Many people were not interested, and some even mocked practitioners. At that time, practitioners seldom exchanged their insights and understandings. They tended to look externally whenever there was a conflict and insisted on their own thoughts and opinions. As a result, the practitioners were unable to form a cooperative body.

Everything has changed now, the practitioner said. But he said he still has to let go of ego if he wants to do better at awakening people.

A veteran practitioner talked about the tremendous changes in her life after her thoughts assimilated to the Fa-rectification. She found a better job, with fewer hours, and has more time to tell people the facts about Falun Gong.

Another practitioner said he travels a lot for work, which provided opportunities for him to meet more people and tell them about Falun Gong and the brutality of the persecution in China.

He shared his experiences about traveling to Morocco, India and the Middle East.

The practitioner said he understood that everything takes place for a reason. As long as he remains steadfast in his faith in Master, Master will arrange for him to come into contact with more people so he can talk to them about Falun Gong.

A series of activities to promote the benefits of Falun Dafa and raise awareness of the brutal persecution in China were held during the two days leading up to the conference.

Practitioners peacefully protested outside the Chinese Consulate in Athens the morning of November 14. Activities were also held later that day and the following day in Syntagma Square and at popular tourist site between the foot of Acropolis and the Acropolis Museum. 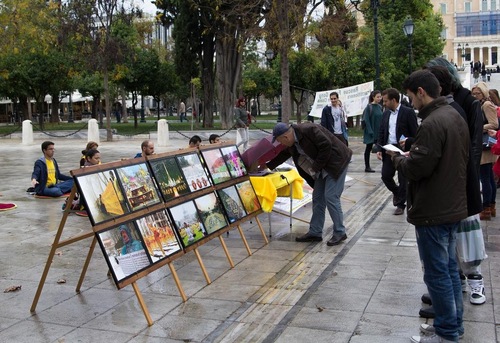 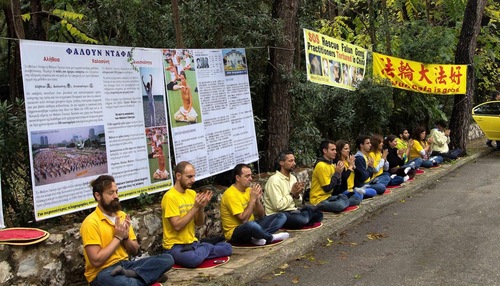 Practitioners peacefully protest the persecution outside the Chinese Consulate in Athens

Passersby read information on display boards about the popularity of Falun Gong around the world, and about the persecution in China. People watched practitioners demonstrate the exercises and read Falun Gong flyers. Dozens of people also signed a petition calling for an end to the persecution.

A group of students from Corfu Island followed along as practitioners demonstrated the exercises. After they finished, the students shouted in chorus that the exercises were great. When the students were told that the practice had been persecuted in China for more than a decade, they wanted to know more and eagerly took some informational materials.

Practitioners from Athens, Thessaloniki, Corfu Island and other Greek cities attended the conference and activities.