(Minghui.org) The Art of Zhen Shan Ren (Truth, Compassion, Forbearance) International Exhibition opened on November 16 at the Industrious Civic Center in Funabashi, Chiba Prefecture. The show provided an opportunity for people to learn about Falun Dafa, as well as the Chinese Communist Party's (CCP) ongoing persecution of the peaceful cultivation practice in China.

During the show's 6-day run, more than 260 people visited the exhibition. Many signed a petition condemning the Chinese Communist Party's forced organ harvesting from living Falun Gong practitioners. Some also bought copies of Nine Commentaries on the Communist Party, a book that exposes the CCP's crimes over its violent 65-year history. 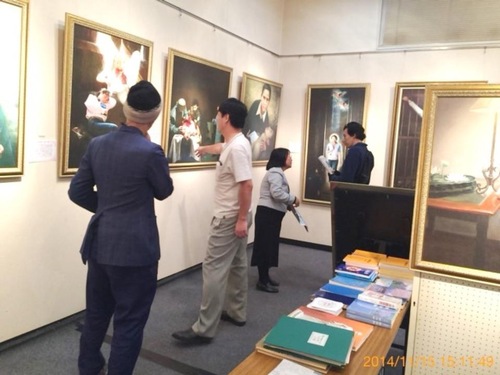 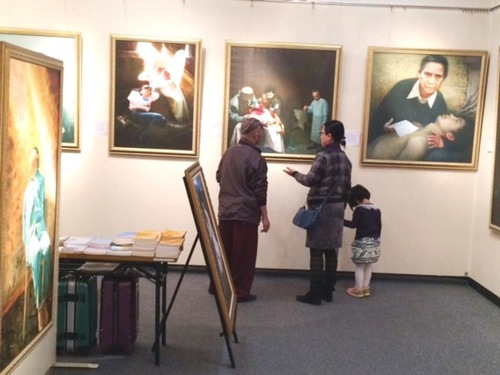 Half an hour before the exhibition opened on the first day, Mr. Ishihara came back to the exhibition hall after he was turned away the first time. The guide couldn't turn him away again so she showed him through the paintings and explained the meaning of each to him, one by one.

When he left, Mr. Ishihara bought four books – three books about Falun Dafa and a copy of the Nine Commentaries.

Two hours later, he called the exhibition center and told a guide that he had already read a quarter of the Nine Commentaries. “I heard that Falun Gong was being persecuted in China many years ago and have wanted to know more about Falun Gong and why the communist regime persecuted it,” he said on the phone. “I am really pleased that I found the answers in the exhibition. I want to learn more about Falun Gong. Please allow me to contact you if I have further questions.”

“I Must Purify My Heart First”

“It is so good to see these great artworks today,” said Mr. Watanabe, a 91-year-old retired medical doctor. He removed his hat and bowed to the painting entitled Lord Buddha.

Halfway through the exhibition, Mr. Watanabe got tired and sat down on a chair to look at the books on display. He bought a copy of the Nine Commentaries. A guide approached him, “Falun Gong can improve one's health. Do you want to learn it?”

“I know I must purify my heart first,” said Mr. Watanabe. He then bought the book Zhuan Falun. Before he left, he signed the petition condemning the Chinese Communist Party's atrocity of forced organ harvesting from prisoners of conscience.

“I Didn't Know the Communist Party Was So Evil”

A middle-aged woman looked at each painting closely. After she viewed the last one, she said to a guide, with tears in her eyes, “I really didn't know the Chinese Communist Party was so evil.” She also signed the petition condemning the forced organ harvesting in China.

“How Much Did Falun Gong Pay Me?”

“Three Illegally Tried and Sentenced at a Brainwashing Center”